I have to tell you, we’ve hit a bottleneck.

My colleague Matt has apparently written lots of new comprehension tasks for the listening exercises in our index.

But instead of sending them down the line in handy batches of five or six, he’s sent twenty or so to Natalia, who checks the Italian, all at once.

And she has a proper job, so not much time.

Think of a python trying to swallow a pig.

Anyway, just so you know, it’s not that I’ve given up sending out ‘new’ material three times a week.

A temporary glitch, is all.

Allora… in the absence of new materials to tell you about, I’ll have a go at answering the question which makes up the title of this article:

If I were learning Italian, what would I study today?

But yesterday evening I squeezed in 45 minutes of Swedish.

As I mentioned on Monday, I’m up to the past, which is quite exciting.

Any language teacher will tell you, students love a new tense!

I spent much of my study session typing out a reading text from the book I’m using.

It’s called ‘Rivstart‘. Any mistakes in the extract below are mine not the authors’:

As you can see, it’s not very long.

But I had fun decoding it, looking up new words, and learning more about Sweden.

For example, the Strindberg museum (I thought he was a composer, but no…) is housed in the writer’s former home in Stockholm, which he called the ‘Blue Tower’.

Though according to Google Streetview it’s neither blue nor a tower.

Anyway, if I were studying Italian today, I’d probably start with something text-based, because that’s what I like to do.

I’d spend some time on areas which I know I normally neglect.

For example, while I can read and understand the above text, I’d probably not be able to actually SAY most of the words in it.

Because I’ve been missing the audio component of the course, I’ve done precisely NO listening, speaking or pronunciation work.

Fortunately I don’t have that problem with Italian.

But the point is that I’d aim to combine the type of studying that I typically do and enjoy, with at least some time spent on the things I’ve been ignoring.

Incredibly, considering I’ve been here for over seventeen years, I still have plenty of doubts about basic and not so basic areas of Italian grammar.

I’d start fixing that by working through our numbered grammar lessons, from A1 onwards:

I’d go for a balance of input and practice.

With listening, reading, speaking and writing.

The tortoise, not the hare.

Most good course books (including the Swedish one above) are structured this way.

But they tend to be designed for classroom use, guided by a teacher who makes the decisions as to what to prioritise and what to leave out.

If you’re self-teaching, as I am, it helps to keep in mind the need to include activities that might not, at first, seem accessible or relevant.

If you don’t know what’s what, and you probably don’t, skipping the boring and/or difficult bits is not an optimal strategy.

Want a quick takeaway from this, so you can get on and actually LEARN something?

That’s another thing I’ve been neglecting.

Even though my wife is Italian/Swedish bilingual, I’ve been too embarassed to practice what I’m learning with her.

She’s keen to help, but at times I find her feedback confusing.

That said, she’s not a teacher. Giving helpful, understandable feedback is a skill.

Which reminds me, next week we’ll be running a FREE TRIAL ITALIAN LESSON offer, like the one we did back in November.

For new students, for one week only, the price of a 30-minute Skype Italian lesson will be reduced from €20 to zero.

The idea being that you can try one with absolutely no risk!

More on that Monday.

In the meantime, I may go find an online Swedish teacher myself and practice some of the basics before facing down my wife and Swedish mother-in-law…

Don’t forget the ‘Ebook of the Week’, Le tante facce del futuro  (‘The Future Has Many Faces’), which this time is made up of eight short stories. 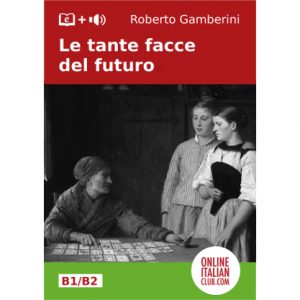 A politician, a prisoner, a child in hospital: a cast of characters imagine what the future holds for them in these eight short stories based on the use of the Italian future tense (plus, a riddle to solve!)

Le tante facce del futuro is HALF PRICE all this week.

Do check out the FREE sample chapter (.pdf) before you buy.

It contains the first story and a link to the audio.