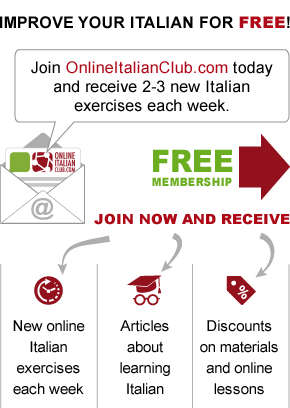 Not sure you want to receive e-mails from us? Check out the online archive of past mailings to see the fantastic material you would be missing!

Want to learn Italian for FREE? Here’s how:

Here we are with the final part in our FREE, 30-part Summer Series of Italian articles with audio.

Has it been worth it? Well, I’ve certainly learnt a lot! Hope you have, too.

Today we’re continuing Wednesday’s profiles of notable medieval women, with the stories of a saint (one of Italy’s TWO patron saints, apparently), along with an otherwise unremarkable inhabitant of a small north-Italian city, who rallied her neighbours to resist the invading Milanese.

The first, you may have heard of, the second, probably not. But together, they’re a good way to end our summer history course on the middle ages. Religion and invasions – sums it all up, really.

You’ll find the entire series on our History page, along with last year’s Summer Series on the Romans. Next year we’ll be doing the Renaissance!

Don’t forget to grab your copy of our NEW ebook ‘easy reader’, which by no accident at all is set in the medieval period, like our Summer Series.

It features Holy Roman Emperor Frederick II, and an engaging young protagonist, who we meed as he’s being schooled in archery in the hope that he’ll be selected to join Frederick’s elite bodyguard. 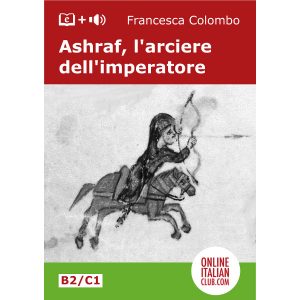 ‘Ashraf, l’arciere dell’imperatore‘ should be enjoyable for students whose reading/listening skills are at least intermediate-level. It’s graded higher, but the story isn’t very long and the plot is easy to grasp…

This first week only, Ashraf, l’arciere dell’imperatore costs just £5.99, rather than the usual ‘easy reader’ ebook price of £7.99.

That 25% discount will end on Tuesday 21st September.

The penultimate in our FREE, 30-part Summer Series of Italian articles with audio is ready for you to read and listen to.

Over the past couple of months, we’ve had a thousand years of warriors, nobles, kings, emperors and popes, men whose, mostly bad, deeds have been sufficiently notable to earn them a slot in the Italian school history curriculum (by which our writer was no doubt inspired), and sometimes even their own Wikipedia page!

But what about the medieval women? We’ve heard little or nothing of them, apart from the occasional daugher being traded in marriage for dubious and short-lasting politcal advantage.

There were female Romans, I recall. Though admittedly their roles were restricted to childbirth, prostitution and serving protective deities in temples (find out more on our History page.)

So what about the ladies of the middle ages?? And I choose the word ‘lady’ deliberately, because if anyone was going to be remembered, it was likely they’d have been born into privilege…

Fortunately, our series writer is also of the female persuasion, and having churned out twenty-eight ‘Game of Thrones’ style episodes packed with power struggles and gore, she’s devoted the final two to profiles of the very few medieval women whose names and deeds are still remembered.

Enough with the naughty boys, already. Let’s hear from the fair sex!

It’s been a while since I’ve pushed our ebook ‘easy readers’ consistently, or published anything new, though I’m 100% sure they’re a help with language learning, at least for anyone who likes to read.

In part it’s just been too hot, up to 40 degrees C at one point. But now the summer’s ending – the weather’s due to break here in northern Italy in the next day or two.

In part it’s because we’re reorganising, or hoping to, with a view to separating our various bits out into more defined legal entities. For example, EasyItalianNews.com will be its own thing, while our online shop will be legally separated from the club website (in case I defame someone…). It’s complicated, but you get the idea.

Anyway, fall is nearly on us, and our Summer Series is coming to an end, which means it’s time to put on a pair of socks, and sell some  ebooks!

Today’s NEW ebook ‘easy reader’ is set in the medieval period, hence the rush to publish it…

‘Ashraf, l’arciere dell’imperatore‘ has B2/C1 on the cover, but I reckon it’s suitable for anyone whose reading/listening skills are at least intermediate, and who likes a good yarn!

What’s an ‘arciere’? Look at the picture…

What’s it about?  Below is a copy/paste of the blurb from the shop, which saves a lot of typing:

When your order is ‘completed’ (normally immediately after your payment), a download link will be automatically emailed to you. It’s valid for 7 days and 3 download attempts so please save a copy of the .pdf ebook in a safe place. Other versions of the ebook (.mobi/Kindle-compatible, .epub) cannot be downloaded but will be emailed to people who request them.

Got all that? Then do take a look at the FREE SAMPLE CHAPTER (.pdf).

Too hard? Or too easy, maybe? Then check out our shop’s Catalog page, where you’ll find all our easy Italian readers listed by type and in level order, nearly all of them with free sample chapters to download immediately, if you wish.

Two things: firstly, don’t forget to check out the online audio version of Ashraf, and of our other easy reader ebooks at various levels. You’ll find the link to the online audio for the WHOLE TEXT in the free sample chapter .pdf, which means that, assuming you’re OK with just listening and don’t need the support of the written text, you can enjoy virtually all of our stuff for free!

Secondly, assuming you do prefer to have the .pdf as well as the audio, this first week only, Ashraf, l’arciere dell’imperatore costs just £5.99, rather than the usual ‘easy reader’ ebook price of £7.99. That 25% discount will end on Tuesday 21st September.

Seen our other ‘Italian’ sites?

Nothing to do with Italian at all: 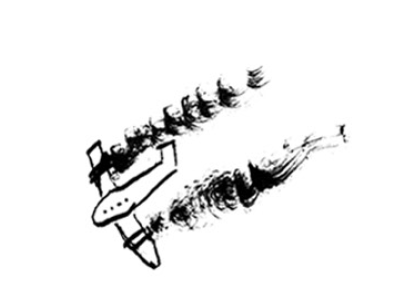 OnlineItalianClub.com is FREE to use, and yet has few of those intrusive ads that follow you around the Internet like hungry cats…

Everything on this site is accessible to all, ‘member’ or not. No registration, username, or password is needed!

So how do we stay free, with a minimum of ads and without charging for membership?

Simple! We pay our bills by organising online Italian lessons with trusted native-speaker teachers. And by publishing ebooks for people learning Italian.

To find out more: 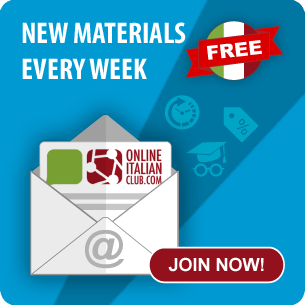