I confess that this rather lazy article is based on what we’ll be having here in Bologna. So, two birds killed with one stone.

No idea. I’ll be looking to see what’s in the shops tomorrow and on Tuesday morning. Something fresh and unusual, but above all, light, as the primo and secondo are going to be filling.

If you have a suggestion, I’d be delighted to hear it (my kids don’t like olives…) 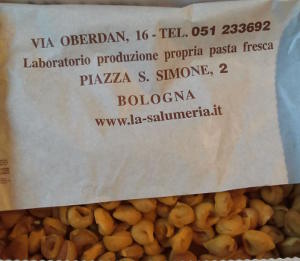 Easy one. It just has to be tortellini in brodo. Tortellini are little stuffed pasta thingies (the filling is usually a mix of pork and cheese). Brodo means stock, which must be home-made in advance. It’s not hard, but you need to leave plenty of time.

The tortellini can be bought: few people these days have the time or skill-set necessary to make their own. On the night, just bring the stock to the boil and drop the tortellini in.

Another no-brainer, with the advantage of costing much less than an expensive fish course, zampone (stuffed pigs’ trotters) are a bit like very greasy sausages with toenails. I’ll be serving them with lenticchie (lentils). Cue groans from my wife and kids. 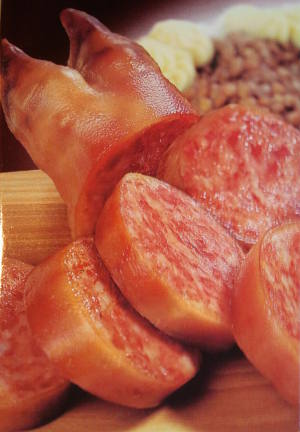 While I admit that zampone e lenticchie are not everyone’s favorite, they are very traditional and do go very well together, the greasy meat perfectly complementing the plainer pulses. Eating lentils is also supposed to mean future prosperity, so I try to max out on them at this time of year.

Lesso. Nobody will eat much of this either, but it takes no effort to prepare, as lesso simply means the meats and vegetables which were used to prepare the brodo for the tortellini. Cold. On a plate. Yummy.

(You can pretty this up a little by slicing the lumps of meat and serving them attractively arranged on a platter with mustard, mayonnaise and so on.)

Sparkling white with the antipasto, and again at midnight with the fireworks. A nice red with the primo and secondo. I’ve a bottle of Amarone della Valpolicella kept for the occasion.

Do you now know the meaning of the Italian words in this list? If not, better study them! They’re essential for any conversation in Italian at this time of year!

(Most, but not all, were explained in the text. Note that I’ve included the articles, so you can see whether the gender is masculine or feminine…)

P.P.S. Coming soon, the “Improve My Listening in 2014” challenge! More details in a day or two…