(This article has a couple of large images in it. If you don’t see them, click here to read it on the club website.)

Several club members have asked me recently how my Swedish is going.

Back at the beginning of December I announced that I was going to learn a language OF YOUR CHOOSING and invited members to vote on which it should be.

I admit, I was hoping for Spanish or French, for which we have masses of new easy readers at our other site, easyreaders.org.

But no, you chose Swedish, arguing that it would bring me closer to my Swedish mother-in-law… Grazie!

If you missed all this, the relevant articles are here:

Well, over the first month I did the two Swedish easy readers we have in the shop. I also used the parallel text versions and made copious notes.

Ideally, I’d have continued this way, but we don’t have any other similar material.

So this month (January) I worked through a free online course.

But that having only seven lesons, I decided to begin with a ‘proper book’, one that my daughter had used last summer on a Swedish course she took in Stockholm.

I made a study plan which set out what days and times I would study (having identified the rare ‘free’ periods in my week).

The provisional idea was to do a chapter of the book each week, spread over three study sessions, revising this if it proved to be unmanageable.

The book is aimed at A1 & A2 students, the first two levels, and has twenty chapters.

I figured that a reasonable goal would be to do the first ten chapters, so covering more or less the first level.

After which, I could give up!

So, the progress report.

As of yesterday evening, I’ve completed the first two of the ten target units.

If you’re curious to see what that includes, the book I’m using has some online material, which you’ll find here. As I said, I’ve done up to the end of Kapitel 2.

And hey, to my surprise, I’m actually enjoying it!

And it’s professionally-interesting to see how the material is organised and structured.

Plus, there’s a satisfying feeling when I notice that I’ve actually learnt something!

Naturally, beyond the intrinsic joys of Swedish itself, studying another language from scratch also offers me a change of perspective, from teacher to learner, from advanced student to beginner.

It’s also a chance to see what’s changed since the last time I was in this position, nearly two decades ago.

The technology is SO DIFFERENT.

I need find out what’s out there, then remember to take advantage of it.

For example, while I’ve been using online dictionaries such as WordReference.com for years, it’s not that great for ‘smaller’ languages, such as Swedish.

Hence I was searching for an alternative.

You’ll agree, I’m sure, that a good dictionary is essential when you’re just starting out with a language.

But no such luck.

That said, a Google search for ‘Swedish – English dictionaries’ produces a box that looks like this:

And lo, typing the word carefully into the left-hand side, produces a reasonable translation on the right-hand side.

You probably already knew that, but it was a surprise to me.

Anyway, it took me a further month to work out that clicking the speaker icon meant I could actually LISTEN TO the word!

Which, given that Swedish seems to have perverse pronunciation, was a huge help!

From there it was just a short step to copying in sentences from my notes to HEAR WHOLE SENTENCES!

Wow. My ‘bok’ was missing the CDs, but now I can at least hear what things should sound like!

On your behalf, I rushed over to test this with a search for ‘Italian – English dictionaries’. 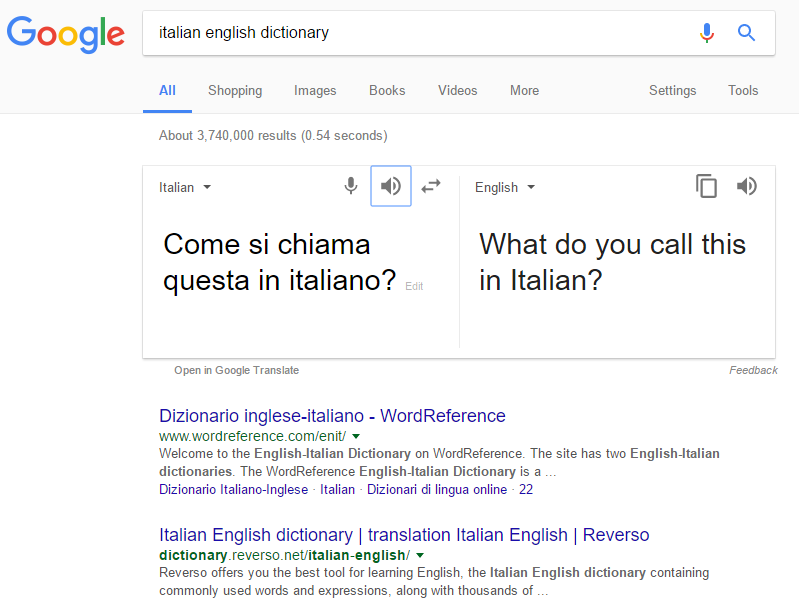 As you can see from the picture, I tried it out with an example sentence.

Both the translation and the audio were just fine!

I rushed to tell my wife about this discovery.

Turns out she already knew.

She’s been using it for years, apparently…

So forgive me if this is all too obvious.

Fired up and ready to learn something?

Free material for your level is here.

Ebooks for learning Italian are here.

And if you’d prefer not to have to organise things yourself, information about one-to-one online Italian lessons is here.