Below is another entry in the Dante/Nimrod translation competition, from Killian in Ireland.

Sorry not to have seen it before, Killian – it ended up in spam.

We get so many spam comments that it’s virtually a full-time job separating the thousands of fake ones from the infrequent real ones.

It’s interesting though – I get to learn a lot about online pornography options, as well as the various medications available for treating male fertility problems…

Hi – here’s a go at your Dante in mongrel terza rima, fuelled by strong tea and a salmon sandwich in Neary’s (Dublin) today

That each one blames himself, he said to me,/
is down to Nimrod, splitter of languages/
and common understanding into chaos/empty,

empty talk. But let him at it. The damage/
is done. Why bother babbling to a babbler/
for whom words fight shy of sense, and will not engage?

And that more or less sums up the response to Monday’s article, which touched on the Brexit situation and the views of those of us expats (dozens here in Bologna) who were denied a vote in the referendum (also those of my children, who are now adult British citizens but were too young to vote three years back).

Several people suggested (nay, TOLD me in strong terms) to keep my views to myself, which I will not, given that I was disenfranchised for having lived abroad for too long.

Bear in mind, will you please, that OnlineItalianClub.com is not a job for me but a hobby. Consequently, I write what I choose.

Which reminds me. On our annual trips back to the UK, due to our modest budget, we enjoy visiting the Wetherspoons pub chain. If you live in the UK, you’ll know what I’m talking about.

Enormous pubs where you can usually find a place to sit down after a busy morning of shopping and enjoy a pint and a meal without it costing you an eye (which is what Italians say instead of ‘an arm and a leg’.)

And each time I’ve been there since 2016, I’ve been thrilled to read the views of founder and chairman Tim Martin, who’s no fan of the E.U. and has made sure all his customers are so aware.

That didn’t stop me drinking his beer or eating his chips, though.

Nevertheless, after having exchanged angry words with at least two club members (actually more like half-a-dozen), it does seem regrettable that the issue should be so divisive.

But what is it, apart from the impact on a small minority like my family and myself, that makes it such a hot issue?

One club member, in apologetic terms, explained that it was all Parliament’s fault for thwarting the will of the people, as previously expressed in the referendum.

Now clearly, I’d see that from an entirely different persepctive.

That the referendum question was not specific enough (remain or leave) and that, therefore, it would naturally be Parliament’s role to establish what exactly should happen next, defining the terms and timetable of the ‘leave’ result while taking all relevant factors (i.e. the state of the union) into account.

That’s a dramatic difference in interpretation, is it not?

Personally, I blame the press.

For instance, I have clearly been hypnotised into my unreasonable anti-democratic views at some point during thirty-odd years of reading The Guardian.

But given that there is such a gulf, I guess we’ll have to disagree.

“Why bother babbling to a babbler/
for whom words fight shy of sense, and will not engage?”

Anyone who prefers not to receive ‘political’ articles such as this one is free to unsubscribe (there’s a link at the bottom of each email sent out).

While still using all the free materials we provide on the website, which remain uncontaminated.

Talking of Dante, here’s the penultimate canto in our series.

It’s a real horror, this one, almost as gruesome as Brexit.

In fact, if I had been Dante’s editor, I’d have told him to start Canto I with a flashback to the brain-eating scene in Canto XXXIII.

When you go into a shop and buy a book of poetry called ‘Inferno’, you’re obviously looking for something shocking, right?

Give the readers what they want, Dante!

(The previous thirty-two extracts are linked to from our Literature page. And the extracts from the final canto will be along soon.) 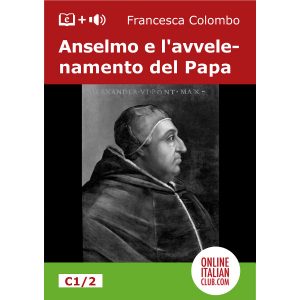 If you haven’t already done so, check out the free sample chapter (.pdf) to get an idea of the level and format of the material.

Don’t forget, there’s a link to the audio for the entire story at the top of Chapter 1 of the free sample chapter (.pdf).

This week Anselmo e l’avvelenamento del Papa costs just £5.99, though the launch offer ends on Sunday, after which the price will be £7.99.

And the other two easy reader ebooks in the trilogy can be found here:

N.b. There are plenty of lower-level ebooks in our online shop. Check out the Catalog page which shows everything listed by type and level.

Tuesday’s bulletin of ‘Easy’ Italian News is here, if you haven’t already read/listened to it.