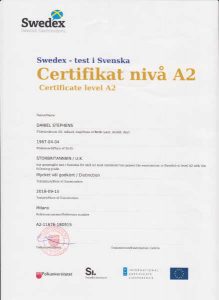 What does the A2 mean?

Here’s the accompanying description, along with the one for the next level up, for comparison: 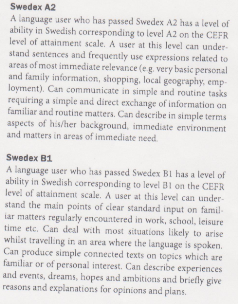 Why am I learning Swedish, again?

See this article from two years ago:

Basically, I was trying to sell ebooks.

The relevant part is at the end:

I haven’t forgotten that, way back at the beginning of this article, I promised I would be trying this approach myself and reporting back to you.

Most of you will know that we’ve recently been branching out by publishing easy readers and parallel texts for other foreign languages besides Italian.

So I thought it would be fun, as well as a ‘proof of concept’, to practice what I preach by having a go at learning a language myself.

Using only our own materials, the options are:

English (I already know that fairly well.)
French (Studied it at school thirty-three years ago, but it’s quite similar to Italian, so maybe not a fair test?)
German (I know almost NO German…)
Italian (Guess this wouldn’t be much of a challenge.)
Spanish (Never studied it, but it’s similar enough to Italian that it wouldn’t scare me.)
Swedish (My mother-in-law is Swedish. I know the Swedish word for ‘beer’.)
Turkish (Lived there for three years back at the start of the ‘nineties, but never studied it formally.)

Oh, and there’s also Portuguese, for which I have three volumes ready to publish. I guess someone should try them out…

Vote, by sending me an email – which language should I study?

I’m psyched, ready for anything, even Swedish.

I plan to start reading and listening on Sunday.

Watch this space on Monday to see which language you chose for me, and how I got on!

And this one, dated three days later:

OK, so I didn’t just use our own ebooks, as originally hoped.

There were only two for Swedish, which was way insufficient.

I ‘inherited’ a text book and an exercise book (level A1/A2) from my daughter, who’d done a summer course.

And I did some online conversation lessons, and tried the websites that my online teachers suggested – almost exclusively listening and reading resources.

This much I know:

So there you go, proof of concept. Two years, two levels.

Of course it helps that, being a language teacher, I’ve had a lot of experience getting students through exams.

I knew, for example, to prepare for all five parts: reading, listening, speaking, writing and ‘vocabulary/grammar’.

Rather than just focusing on grammar (an all-too-frequent failing!)

How did I get on? 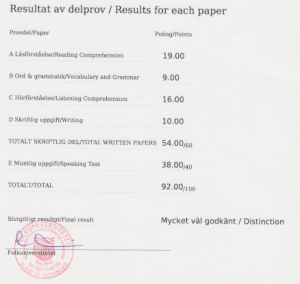 The listening was a disappointment, but the rest was very pleasing…

Spread that over two years and it comes to sixteen euros a week, which is about what I spend on wine, and certainly less than a ‘proper’ language course.

I’d call that pretty cheap for an internationally-valid qualification.

So now I have to decide what to do next.

Swedex B1 is exerting a strong pull…

If I succumb, I’ll need to order the books and draw up a study program.

Another year should do it. Perhaps I could take the exam in the summer, maybe in Sweden?

If life doesn’t get in the way…

It’s great when people from far-flung places write to say they enjoy these articles, or that they’ve followed a suggestion and found it worked well for them, or that something I’ve written has given them the confidence to continue learning Italian.

Equally, it’s depressing when people take the trouble to inform me that I’m a bore, or that my articles are overlong/irrelevant/pointless/wrong, and so on.

Either way though, if I hadn’t been scratching around for something to write about here in the club, I wouldn’t have had this GREAT EXPERIENCE, of learning to communicate in a new language!

So thanks to everyone who, one way or another, has motivated me to keep at it.