I started writing later today as, beard-trimmed, hair-combed, and clad in clean shorts and a new polo shirt, I made my dash for freedom (like Steve McQueen in this famous scene.)

Stefi and I, clutching a fresh face mask each, and carefully-completed copies of the new ‘modello autodichiarazione’, headed OUT, to our local park and back!

This is a walk we’ve done daily for years, but which hasn’t been permitted since early March, nearly two months ago.

But today, Italy – at least in part – is back at work!

Also, the rules about leaving home have been slightly relaxed, so as to permit certain forms of exercise, visiting relatives, and so on.

So it’s a lovely spring day here in Bologna. We couldn’t ask for better weather for our adventure!

The temperature’s around 22-23 degrees C and will reach 25 by mid-afternoon. The sun’s shining, the air is clear, and there’s a light breeze.

Closing the front door behind us, we set off and, within a few steps, are passed by a family on bicycles, which definitely wouldn’t have been allowed before!

Down the street a little, the road is blocked by an earth-mover excavating a large hole in the tarmac so as to repair a broken sewer.

Further on, there’s a group of builders and architects standing outside a house which was being done up, until the virus stopped work in March. They’re planning how to proceed with the job.

In the next road down, the center of our little community, the Monday street market is taking place. There are many fewer stalls than usual, not much more than the fruit and veg people and the van selling fried fish for lunch, but still – another sign of life!

The local park rings to the buzz of contractors’ motor-mowers and strimmers, and looks much like it always does on a beautiful spring day, with walkers and cyclists circling the lake, others sitting reading or soaking up sunlight.

In the areas the contractors have yet to reach, vegetation reaches far up through the wooden slats of the path-side benches.

Further around the lake, a hen, accompanied by what must be a dozen half-grown chicks, navigates her way through the sea of swaying grass, which reaches far higher than her offsprings’ heads.

Exiting the park, we remark on the traffic, not just the usual empty ghost-buses, wending their lonely routes across the city, but actual queues of vehicles. Engine noise, fumes!

Most of the shops we pass are closed, some premises (our only local pub!) cleared of furniture and fittings, seemingly never to reopen.

On the final stretch – knees creaking, sandals rubbing bare toes, an unaccustomed feeling of being physically-tired – we spot a parked ‘Vigili’ (local police) van, two face-masked and uniformed officers standing besides it, chatting while they keep an eye on things.

I wish them ‘buongiorno!’ as we pass, and they reply in a cheerful tone (to my regret not insisting on examining our ‘modelli’ and veryifying our ‘carte d’identità’.)

And then, after four thousand seven hundred savoured steps, we’re home again and collapse, semi-exhausted but happy, on the sofa. 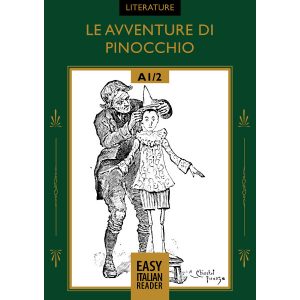 Don’t forget that ‘Le avventure di Pinocchio‘, our new, beginner/elementary-level (A1/2) ‘easy Italian reader’ ebook (the first in a series of simplified versions of classic Italian literature), is 25% off the usual ‘easy reader’ price, so just £5.99, until next Tuesday night.

Also don’t forget that, if you buy and read it (but even if you don’t, given that the original is available free online), we have a ‘Mini-Book Club’ page, where you are welcome to ask questions, make comments, and generally interact with others (including me) who are also enjoying Collodi’s story. Click here to take a look.

It’s free, as is subscribing to receive the thrice-weekly bulletins directly into your inbox (so you don’t have to remember to visit the website!)