I’m utterly fed up with arguing with club members about why they should ‘just read’ and not use a dictionary while doing so.

And yes, I know there are lots of times when, actually, you SHOULD use a dictionary – for example, when you are ‘studying’ rather than ‘just reading’, or if you’re being paid to translate something and so need to be precise.

But I find it quite frustrating that people don’t see, or don’t want to acknowledge, the point – that if you don’t read (actually read, as opposed to studying with a text) in your new language, you will get less input, so see fewer or no examples of the structure and vocabulary, and equally importantly have less to motivate you – because in the medium-long terms, reading is way more interesting than studying and so easier to maintain for the time necessary to reach a good level in your new language.

There seems to be a general consensus, which is utterly wrong, that each word, phrase or sentence is a discrete item, which needs to be understood before moving on to the next. Taking that approach, though, will totally cancel any benefit from reading. You might as well be doing exercises in a grammar book. As I said, however, I’m fed up of arguing about it.

So anyway, pondering how much fun I was having bashing my head against a brick wall, it occurred to me, well perhaps people don’t know HOW to achieve something BIG, such as reading a book in a language they don’t yet know well, or learning the language itself, for that matter?

Overnight there was a comment on the club website from Rob, who is still battling valiantly with ‘Il nome della rosa’ (read what he says here, scroll right down – it’s the second comment from the bottom.) Now there’s someone who knows how to get something hard done – you start, and keep at it until it’s finished. Bravo Rob!

I’ve lost count of the number of people who’ve written to tell me that they quit this or that original text because it was ‘hard’. Well of course it’s hard, I exclaim to myself each time I read an email or comment to that effect. Learning a language IS hard, didn’t you know? What were you expecting? And reading an AUTHENTIC text, rather than materials prepared for learners at your specific level, is going to mean dealing with a MASS OF COMPLEXITY.

Now there are two ways to manage a mass of complexity, such as Eco’s book, or Pirandello’s – you can do it the smart way: keep reading, keep turning the pages, and cross your fingers that something will sink in eventually, but if not, ‘pazienza’, as my wife would say. Or you can take the ’empty the ocean with a teaspoon and a soggy paper cup with a hole in it’ approach: look up and attempt to memorise each new word you encounter, translate the whole thing into English just to be sure you understand every nuance, etc.

REALLY intelligent students (we have many in our club) will probably spy the approaching huge task while it’s still on the distant horizon and say to themselves, actually no, I don’t think I’m ready for that yet, and probably still won’t be by the time I get to it, so what I need to do is build my skills slowly and gradually (for example with ‘graded’ easy reader ebooks) in anticipation of doing something like that at a future moment.

But the world needs its heroes, like Rob but also Laura, Minou and the other gung-ho club members that frequent the Mini-Book Club comment sections.

But perhaps you’re a potential hero too, and are wondering how to achieve something BIG, like 503 pages of Umberto Eco in the original, or writing your own book, why not, or achieving conversational fluency (speaking and listening enough to get by without undue effort) in Italian or another language?

Your heady ambition need not be linguistic: what about staying married for decades, or bringing up kids who go on to do well and have happy lives, or starting a business and avoiding both bankruptcy and insanity, or making a hard promise and (mostly) keeping to your word?

One important thing is that you have to WANT TO succeed: there has to be a reason, something that motivates you to improve. With language-learning, for example, people often start for dumb reasons (attend a class because a friend asks you to and you have nothing better to do) but then find better reasons that keep them interested as they go along (it’s fun, I feel more confident in myself, I’ve discovered a new world about which I knew nothing.)

But having a reason, whether it’s huge matter-of-life-and-death motivation or a flimsy, little blow-away-when-the-wind-changes type of impulse, is not sufficient in itself.

The other thing, and this part is essential, is having the ‘grit’ to keep at what you start, even when, especially when, it looks and feels like you’re wasting your time, when everyone is asking you why you’re bothering, when the prospect of ‘success’ or ‘finishing’, however you might define reaching your goal, seems to be receeding rather than approaching.

Have a reason, show ‘grit’ and keep showing ‘grit’. But… and here’s where I come in… with any ‘BIG’ task that you haven’t done before, there’ll be plenty of things you don’t know how to do, time-wasting mistakes to avoid, pitfalls to leap without impaling yourself on the poisoned stakes below, and so on.

In short, you need to be motivated, you need ‘grit’, but if it’s an unfamilar task, you may also need guidance on what to aim at and how to optimise your progress.

Don’t go down that jungle path – there’s a tiger that leaps out from the bushes and devours passersby. No really, there IS! You don’t see any tigers and you’ve heard it’s quicker that way? Really, please don’t do this… Oh well.

Someone wrote to me the other day asking if I would tell her my ‘philosophy’ of language-learning. I welcome questions, but everything I know about language-learning I have probably written about many, many times, and it’s all on the club wesbite: ‘Start here‘, ‘How to learn Italian (or any language)‘, and of course ‘Best of…‘

If you want to know what I think, go read (at least it’s in English!)

I’ll end with a personal example, not language-learning this time, because learning foreign languages does get easier when you’ve already managed it previously – if I write that I am an intermediate level in this language or an advanced level in that one, it seems like bragging, so doesn’t really help.

So let’s talk about the club website, which currently comprises 1,250 articles like this one, 1,542 other pages (for example, with free grammar explanations or listening practice exercises) and 10,516 comments – many of which I wrote myself.

I think I started the site in an idle moment back in the summer of 2012, with an initial investment of approximately no money whatsoever and a large sack containing misplaced enthusiasm. Since then the website has just mushroomed, though the snowball only really started expanding exponentially as it rolled down the hillside once I committed to writing three articles (like this one) each and every week, throughout the year.

Once I started doing that (honestly, I forget why), the passing of the years and sheer, consistent EFFORT have turned what was a cute little goldfish of a website into a blue whale of a project that eats up much of my time. Go Google ‘learn Italian’ and you might spy us there on the first page of search results along with Duolingo (which employs hundreds of people), the illustrious British BBC, and a couple of other valiant but persistent no-hopers.

Ditto with our online shop, which must have several hundred ebooks in it by now. We started with one, no shop to sell it in, and no customers willing to buy it.

We sought out no early-stage venture capital investors, I didn’t apply for a bank loan (not that one would have been offered) – we just started small and learnt as we went along. For instance, our best ebook writers had never written anything similar until we suggested one day that, hey, you’re an Italian teacher, would you like to write an ‘easy reader’ for us? What’s that? Well…

Language-learning is just as hard, or harder, than building a successful website from scratch, or running a modest little business in the worst recession for decades. But the factors are the same: motivation, grit, investing time, and being willing to seek out examples of what works well and learn from them.

The launch offer (-25% on the usual ‘easy reader’ price) for Uno, nessuno e centomila ends on Sunday night. This is your final reminder! 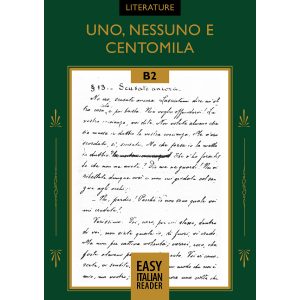 Also, did you listen to Thursday’s bulletin of ‘easy’ Italian news?

And have you subscribed, yet? It’s free, you know?