Still ill, still suffering from lack of sleep, and still short of time, so I’ll keep this short, and apologies if it’s so banal that it doesn’t help anyone.

I write about language-learning three times a week, every week, so over a hundred and fifty times a year. It’s not always easy to think of something new to say, so often I just say the same basic things, but in different ways, or I try to.

It’s a trope in marketing, which I briefly studied but makes up a large component of a lot of the things I do each day (including teaching), that potential ‘buyers’ need to hear the message multiple times – a number that’s often used is thirteen, on average – before they will take action and ‘buy’. Or in this case, take action and try whatever it is I’m constantly saying will make your language-learning more fun and more effective.

No shame then, in coming back, again and again, to the same topics, especially if there’s evidence that the repetition is having an effect. In the sense that we’re actually influencing people to modify their approach to language-learning, most obviously by not focusing only on grammar, but adding to the mix time spent reading and listening.

In the past I wrote about how I got myself some Bluetooth headphones, installed radio apps on my smartphone for the languages I’m learning, and so was able to combine the doctor-prescribed daily 30-minute-minimum brisk walk (which I had often found myself reluctant to make time for) with 30 minutes listening to the news in Swedish, French, Spanish or whatever was on the menu that day.

The trick is to make these things a HABIT, I discovered. If you reflect on what works for you with your own language-learning, you’ll probably conclude that it’s the things that you do habitually that work best for you – perhaps because habits have their own momentum, perhaps because you get better at things you do regularly, which is motivating.

But habits can get messed up by life.

My roomie needs driving to her – how shall I put this, day job, perhaps? The night job being to keep me from getting much sleep – which, unfortunately, is on the other side of the city, so about an hour’s drive, there and back, twice a day from Monday to Friday (except when I’m teaching in the afternoons, when my wife takes the bus.)

That’s a big chunk out of my day, and my week. I’ve therefore not exercised hardly at all recently, which doesn’t much bother me, but which also has meant that I’ve not had the default option of listening to Swedish, French, Spanish, etc. while doing so. Neither have I looked at my subscriptions to Le Monde, El País, and so on.

Things changed, life got messed up, so learning habits fell by the wayside.

But learning habits can be tweaked and so revived.

As neither my wife nor my new roommate are very chatty at eight a.m., I’ll have the car radio playing the Virgin radio italia morning show, an engerising combination of rock classics and commentaries on current events (the show ends at nine a.m. CET, so something else will be on now.)

Today we heard Coldplay, Led Zeppelin, a commentary on the pointlessness of a two-year legal process to prosecute a poveràccia accused of stealing food to the value of €5 from a supermarket, and loads of stuff about Putin and Ukraine.

Once I’d dropped the ladies off, though, I was clear to listen to whatever pleased me. Which is me, finally getting to the point.

Our car is a 2003 Chrysler Voyager, covered in dents, which is how I managed to afford an automobile that could seat my larger than usual family, plus a couple of nonni, and which had – back in 2009 or whenever, when I got it, this was a first for us – a CD player!

Another first in my driving career was the Voyager’s cruise control, which I never used. As any motor racing fan could tell you, it’s simply wouldn’t be appropriate for Italian driving conditions, in which split second timing, rapid accelerations, sudden changes of direction, and a certain killer instinct, can get you to work on time.

N.b. You do see the odd Tesla on Italian roads, but I swear, I never hear anyone boast that their car drives itself. It would be like telling your colleagues that your mom still chooses your clothes…

Our CD player got blocked fairly shortly after we acquired it, probably as a result of someone small pushed a button, a coin, or similar, into the slot to see if it would pop right out again, as the CDs no longer do.

But there was still the radio (not one of these newfangled wifi-connected ones, obviously), and over the years I’ve used it to improve my Italian listening skills from almost zero, to good enough to follow most of what’s being said without a second thought. For instance, I was ‘there’, in parliament, live, when Berlusconi finally had his immunity from prosecution removed, and so ended his chequered career as an elected representative to begin one as a convicted criminal (Rai GR Parlamento, if you’re interested – as I write, someone’s making a speech about diversifying sources of gas, given the Putin situation.)

Back to today, though, with the girls gone, there’s still the smartphone, which has a 3G data quota that I never use up, a reasonable loudspeaker, and – here’s the thing – fits conveniently into the niche between the driver’s door window sill (do cars have window sills? You know what I mean) and the dashboard.

With its rubbber protective cover, it sits there snugly, mostly unperturbed by the wild swings and sudden braking manoeuvres that successful driving in Italian rush hour traffic requires.

And since I realised that, all I need to do is to fire up the Swedish state radio app and tap the ‘news headlines’ icon, before slamming the car into gear and rejoining the fray. It’s news about Ukraine, in Swedish, all the way home!

There’s a bus strike in my city today, so I’ll be on pick up duty this afternoon, too. Just me on the way there, a carful of tired people on the way back. So French or Spanish on the smartphone while outbound, songs or chat in Italian on the way home.

As in the title of this article, using your smartphone as a substitute car radio is such an obvious life hack that I can’t be the only one that hadn’t thought of it.

And the message about the cumulative power of habitual reading and listening always bears repeating.

A final reminder about this week’s half-price eBoook of the Week, the B1 (intermediate) Zio Ciro e la pizza. 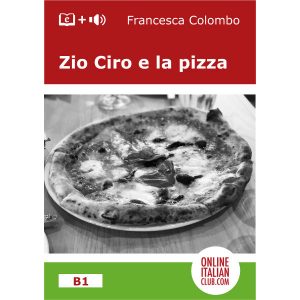 Join Angela as she helps her Neapolitan uncle prepare pizzas for a special lunch, while learning the fascinating history of Napoli’s most famous dish!

Thursday’s bulletin of ‘easy’ Italian news is ready for you to read/listen to – for free!

I haven’t, as I’ve been barely functioning as a result of a nasty virus and cumulative lack of sleep. But I have overheard the EIN team lamenting that Putin timed his invasion for just hours after they’d completed editing and recording this latest bulletin, on Wednesday evening, ready to publish on Thursday morning.

Never mind, kids – I tell them when they miss something huge that every other news-themed publication in the world is covering – it’s for language-learning, remember? We’re not running the New York Times, right?