For the last few months I’ve been working with a writer, who is also one of our Italian teachers.

We have a number of websites, aimed at both English speakers (like this one) and Italian speakers, for example NonParloSpagnolo.com, which as the name suggests is for Italians who’d like to begin learning Spanish, Imparareinglese.com (figure that one out for yourselves), and italianoxstranieri.com, for teachers of Italian as a foreign language. There are probably around twenty-five websites in total, too many for me to maintain on my own, which is why I need a writer to help me.

“But what shall I write?” is her implicit and sometimes explicit question, to which I suggest she ask herself who the site is for and what those people might need or want to read about. To me, that seems fairly obvious, but then I’ve been creating websites and commissioning or writing ‘content’ for them for many years now, getting on for two decades, in fact.

If you didn’t already know, you can find out how long a website has been going and who’s behind it by searching for ‘whois’ and the domain address. For example, I Googled ‘whois onlineitalianclub.com’ and the first result reminds me that I registered this domain in 2012, so nearly nine years ago. I remember putting the website together, and writing the first articles, that summer, during the quieter moments of our summer holiday. My youngest child was nine, so finally there were quiet moments.

How did I know what to write about? Well, we had a growing Italian language school at the time, so the basic idea was to take the ‘content’ from the school site that wasn’t specifically related to choosing an Italian course in Italy, the various exercises our teachers had written, and so on, and to put it someplace where anyone could use it, where it wouldn’t be seen as promotional material for just one particular school but as a resource that was available to everyone, no matter where or how they chose to study.

And after that? After that, I just guessed. I tried things, and I asked people who used the site. People wrote me emails to say what they liked and didn’t, and sent suggestions. Over the years, a lot of club members contributed in various ways – by pointing out mistakes, for example.

But mostly, I just guessed. A lot of things we’ve done successfully, such as publishing ebooks or organising online lessons, came about because we had people hanging about looking for something useful to do. A team of interns put together our Italian Workout series, having sat through months of free Italian lessons at our school in exchange for what was supposed to be work experience. The online teaching resulted from hearing my staff moan, over and over, about how little they earned, and me replying that, given that they were only in the school five or six hours a day, why didn’t they take on a second job? But how, they’d always ask, and so…

But mostly, I just guessed. I’d ask club members, once there were a few thousand of them (there are now fourteen thousand of you), but the feedback wasn’t always very helpful – people would ask for different, contradictory things, or for content that I thought would be a distraction from the way that languages should be learned. I tried asking teachers, but that didn’t help a lot either. Putting togther winning content ideas is a very different job from teaching, as anyone in the media or on social media will tell you.

So I guessed, sometimes based on things that I spotted on people’s resumes when they came asking for work. Ah! I see you’ve really into history? Would you like to write a series of articles about Roman history for the website? Yes, sure I’ll pay you! Or, look, it’s clear you’re a big literature fan. What about summarising some classics of Italian literature, so we can encourage learners of Italian to read and listen more?

Did my guesses always work out well? Absolutely not. Certain things I spent loads of cash on were only of interest to a few. Other things worked well at the beginning but then disappeared from the search engines, so lay neglected.

As I emailed my writer yesterday: try stuff, fail quickly and cheaply, then try other stuff.

Probably the thing that worked out the best, in hindsight, was when I figured out that the best way to be producing material for leaners was to get people who were learning languages themselves to write it, so from writer-learner to reader-learner. That had to be a winning idea!

Yet there was a snag even with that brainwave. As it turned out, finding a writer or a language teacher who had the time or interest to learn foreign languages themselves was far from easy. Impossible, in fact. So eventually I abandoned the idea, though it lay there in the corner of my mind for several years, where I couldn’t help but trip over it occasionally.

And so, in the end, having run out of reasons not to, one gloomy November or December afternoon, four or five years back, I decided that if I couldn’t get anyone else to write about learning, for learners, from the learners’ point of view, I’d have a go at it myself.

I asked club members at the time (some of whom are still with us…) to pick a language from a list of alternatives: French, which I’d studied at school but forgotten; Turkish, which I’d picked up as a young man during the first years of my English-teaching career; Spanish, which is similar to Italian though more useful; and, just as a joke, Swedish – because my mother-in-law is Swedish, and my wife is Italian-Swedish bilingual.

You voted, and probably just to spite me, chose Swedish. But fine, I’m easily provoked, and with twenty-five years of language teaching behind me, had something to prove. So Swedish it was!

Back to the point of this, though. My new writer, and how she can find ideas about what to write about. Ask the readers, I tell her, try to get a conversation going! Hopefully there’ll be comments on the article, or emails in response to it, and that should give you some clues.

Here at the club we don’t get a lot of comments, as most people read these articles in an email app (to comment, you have to visit the website, locate the article, and scroll down to its end, where there is a comment form to fill out.) Often, they’ll just reply to the email containing the article, instead.

But last week’s article on Wikipedia generated loads of comments, so clearly there’s the potential!

Anyway, to start the ball rolling, the title of today’s article is “Where did you begin? How far have you got? What’s next?”, which I hope will help begin a conversation amongst club members about their language learning progress and goals.

If you click here, and scroll down to the end of the article, I’m intending to write the first comment myself, about my Swedish.

If you don’t click here, you won’t see it…

Hopefully you will click, then join in by telling us about how your Italian is going.

And from what I hope will be a reasonable number of contributions, I may be able to discern ideas for future articles and content.

Don’t forget this week’s new ‘easy Italian reader’ ebook, an original story set in a village in northern Italy in the nineteen-twenties and nineteen-thirties. The level is C1, meaning it’s suitable for upper-intermediate and advanced students, and for the first seven days it costs just £5.99, instead of our usual easy reader ebook price of £7.99! 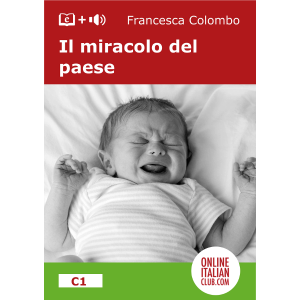 Be warned, this is not a tale for readers who enjoy happy endings…

Tuesday’s bulletin of ‘easy’ Italian news is ready for you to read and listen to, if you haven’t already done so. I admit, I haven’t, so I can’t tell you if it’s a good one, or not. But I’ll get to it, I promise!