Before I begin, have you listened to Thursday’s Easy Italian News, yet?

If not, listen to it today because there’ll be another one out tomorrow (Saturday) morning.

No pressure or anything…

The feedback we’ve been getting on the new website has been nearly 100% positive, which is great.

And there’s been much MORE of it than usual, which means I’ve been spending half my time writing back to people.

That’s something I usually enjoy.

The problem this week is my advice ‘DON’T LOOK UP THE WORDS YOU DON’T KNOW!’, which has been, at the very least, controversial amongst club members, some of whom have disagreed strongly, via email.

Bear in mind, we’re talking about ‘listening practice’ here, and that listening is a ‘real time’ activity.

You CAN stop the audio to check something, but that detracts from the value of the exercise, which is intended to prepare your brain for situations in which you have to manage a FLOW of information, much of which will be elements which are not recognisable to you.

You don’t control what you hear.

So in effect, you’re practising dealing with stuff you don’t know, so that you’ll have a better chance of figuring out the ‘big picture’ from a set of fragments when you have to do that LIVE, say in conversation, or at a conference or meeting, or when watching a film with others who won’t tolerate you pausing it every few seconds.

Easy Italian News is NOT SUPPPOSED TO BE A VOCABULARY EXERCISE.

Listen to it, repeat a few times, then stop. Do the same for the next edition.

If you do all three each week (Tuesday, Thursday, Saturday), and listen to each ‘broadcast’ three times, you’ll have had 80 minutes or so of listening practice that you probably wouldn’t otherwise have had.

That could be a level’s worth.

Would you like to improve your listening comprehension by a level in six months?

Of course you would, especially if it’s free.

The problem, of course, is that no one else has been putting out such quantities of free material, with transcripts, written by teachers, and produced regularly.

But now someone is.

So why waste the chance?

You COULD still look up all the words you don’t know.

And especially, don’t do it BEFORE you listen.

In ‘live’ conversation you can predict the words you might hear, but you can’t KNOW what they’ll be.

Life, people and language – they’re all unpredictable, at least to a degree. Use Easy Italian News to practise for that.

Once you’re done with your three repeats, three times a week, OF COURSE you could then spend extra time looking up (and memorising) all the words you don’t know.

If you didn’t have anything better to do.

But personally, if it were me, and if I had the extra time to indulge, you know what I’d do?

I’d follow the links under the stories and read the source articles.

So yet more, free, input.

And for new-word fetishists, that’s a goldmine.

So, a word on FREQUENCY.

Another reason for not looking up unknown words is that a lot of them would be a poor investment of your time.

Yes, look it up, understand the meaning, write it down.

And then maybe you’ll never see it again, or at least not until you’ve long forgotten it.

But the words you see ALL THE TIME?

‘Talman’, for example, (it’s Swedish for ‘leader of parliament’ or ‘spokesman’) is in virtually every newspaper article I read just now, every day.

I didn’t have to look it up, as every article explained just who he was, how he got the job, and why that matters.

I could probably find out what colour his underwear is, if I looked.

If a word is FREQUENT, your brain is programmed to figure out the meaning from context, just as an A.I. (artificial intelligence) algorithm would do.

Given enough example pictures, plus feedback from humans when it makes mistakes, an A.I. algorithm can tell you that the animal in the photo is a cat, rather than a squirrel.

Unknown words, on the other hand, can happily remain unknown until the day when there are sufficient examples to make them worth bothering with.

Not spending our morning memorising words.

O.K, this article is entitled ‘What you’re learning when you’re NOT looking up new words’, so I’d better get to that quickly.

THIS ASSUMES YOU’RE LISTENING AND READING THE TRANSCRIPT AT THE SAME TIME:

1.) Next week we’ll be having our Autumn Sale, which means an attractive discount on everything in our online shop – ebooks, online lessons, and so on.

If you don’t want to hear about it, stop reading these articles from Monday 01 October to Sunday 07 October.

Or ‘unsubscribe’ – there should be a link at the bottom of this text with which you can do that. Click it and follow the simple instructions.

N.b. existing online students should already have received the ‘coupon code’ from Lucia. If that’s you, and you haven’t, write to her and ask!

If you want this week’s ‘Book of the Week’, Il sorpasso, at half the usual price, then buy it before Sunday, when the offer ends. 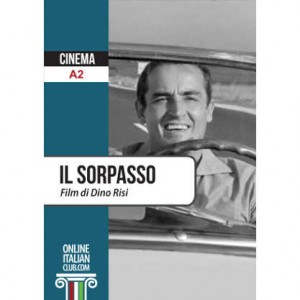