The wife’s back from hospital, thanks to everyone who asked. But it’s been a heavy week, so I’ll keep this short, then maybe go wash, or shave, or do some of the things that piled up while I was managing Roomie and the adult kids single-handed.

Which reminds me, Wednesday I wrote that I was knackered, which is British English slang for ‘really tired’. I realised later that that was a missed opportunity as if I hadn’t been knackered, I’d have noticed an opportunity to introduce club members to an apposite Italian word.

I’m ‘distrutto’ = I’m destroyed. We don’t put it like that in English (though Italians always try to), but the meaning’s unmistakable.

If I was mamma to Roomie rather than papà, I’d be ‘distrutta’, the adjective following the gender of the subject. We (mamma e papà) would be ‘distrutti’.

Practice that one over the weekend:

So anyway, a few articles back I mentioned that quite often people write to me wondering where the paper version of their ebook has got to, or how much shipping to Kiwirrkurra Community, Western Australia will come to, or worrying that their package will not reach them because next Monday they have a doctor’s appointment (una visita medica), and so on. Quite often people note in the order form something like “If I’m not in, leave it in the porch/with the neighbour.”

And I always reply, it’s a damn EBOOK, a .pdf file (with .mobi and .epub versions usually available free, on request), which means there’s no package, no shipping charges, and you don’t have to stay home waiting for the postperson (ours is a friendly blonde woman on an electric tricycle), or trouble your nice neighbour.

The first line in the ebook shop’s FAQ is “We don’t sell books made from dead trees”, because it is indeed a Frequently Asked Question.

Anyway, a few hours after that article went out via email, someone replied to it, asking if I there was a soft cover version, so as to avoid the prohibitive shipping charges associated with sending a hard cover version to Crested Butte, CO.

I wrote back pointing out that in line 9 of emailed article he’d just replied to it was clearly stated that “We don’t sell books made from dead trees”, or words to that effect.

Minutes later he replied, explaining that he didn’t read my articles, because they’re too long.

At which point I suggested he do us both a favour and unsubscribe. And that, for now, was the end of it.

Makes me think, though. There appear to be two types of club member, the ones that read the articles because they enjoy my moans, or like hearing about Roomie throwing up on my wife’s head, or whatever, and the other group, who skip the actual articles, but scroll down and read the adverts at the end.

Which group would you guess to be bigger?

Monday I published the Rigoletto ebook (it’s an effing computer file, ragazzi), and wrote about it in the usual Monday article. But sold only a few copies. But that’s cool, really it is.

Tuesday I emailed the ebook shop’s mailing list (NOT the same as the club members’ mailing list – we’re not supposed to do that any longer – though there’s going to be some overlap), with a straight up ad, and sold a fair number of copies (that is to say ‘downloads’).

Club members, in case you are wondering,  mostly read my rantings via email, as you are doing now. The ‘open rate’, which our mailing provider estimates using some clever algorithm, is around 35-40%, which is pretty good, apparently. Say that three-and-a-half out of ten club members who get this article in their inbox will actually open it.

Though clearly, not all of them read as far as line 9…

The open rate for the ads sent to the ebook shop’s list is lower, at around 25%. But it’s a bigger list and what’s sent to it is exclusively commercial (no jokes…) Lots of people on that list will no longer be interested, if they ever were, but haven’t yet unsubscribed. But a fair number do actually buy ebooks (though the cellulose thing is still an issue for some).

Which reminds me of something I wrote in the intro to an EEEEbook of poems, a while back, in the pre-pandemic world:

The editorial staff
would like to assure readers
that no poets were killed, injured,
or in any way mistreated
during the writing
of this ebook
Non-unionized writers
were not employed
and no financial
or other incentives
were offered
The e-book itself
was manufactured
from only the finest electrons,
which were cold-pressed
within an hour
of being harvested
You may be certain
that this product
is 100% cellulose-free
and that our production processes
minimized the use
of polluting inks

! Readers of
a sensitive nature
are advised
that this e-book
contains taboo language
as well as comments
that some
may consider to be
in questionable taste

Which more or less sums it up, or at least I’d hoped so.

I think we sold seven copies! The FREE sample chapter .pdf is here. And please don’t write to complain about the apostrophe, which is correct.

Hope you have a pleasant Friday, and a nice weekend!

Also don’t forget that this week they’re having their bi-monthly appeal for donations. Their site is free to accesss – donations from users pay for the writers and the website hosting.

If you’ve used the ‘easy news’ website to improve your Italian, visit the Donate page and send whatever you can afford, to help them out.

Over the last couple of months we’ve published a number of ‘easy reader’ ebooks based on famous Italian operas. 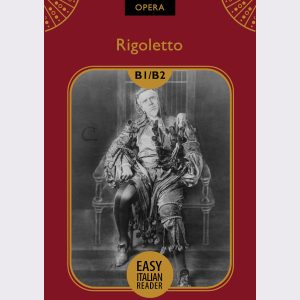 First we did a simplified text + audio version of Nabucco, one of composer Verdi’s most famous operas. Then there was Puccini’s romantic classic, Turandot, next another Puccini weepy, La Bohème, and this week we’re back to Verdi, and his Rigoletto.

Get yourself a copy at the 25% launch discount price and, as well as saving a couple of pounds, you’ll liven up your language studies with this interesting skills practice material, and at the same time learn about Italian culture!

Court jester to a sex-addicted aristocrat, Rigoletto earns a nice living mocking the courtiers whose wives his boss seduces, safe in the knowledge that the Duke he amuses will protect him. But then his many enemies learn that Rigoletto has a secret…

Begin with the ‘easy reader’ ebook before, perhaps, seeking out a recording of the opera on Youtube. Our material is written to help learners understand and enjoy the Verdi’s production, in the original Italian! Or just use this original Italian reading/listening practice material to add a little variety to your study program.

When your order is ‘completed’ (normally, immediately after your payment), a download link will be automatically emailed to you. It’s valid for 7 days and 3 download attempts so please save a copy of the .pdf ebook in a safe place. Other versions of the ebook (.mobi/Kindle-compatible, .epub) cannot be downloaded but will be emailed to people who request them.