Don’t know what it’s like where you are, but here in Bologna it’s been miserable for months.

We’ve had the occasional flash of nice weather, but lately it’s been rain, rain, then more rain.

Each day I watch the simplified news and weather forecast from Sweden (to improve my Swedish, obviously), then shout out to my half-Swedish wife, knitting and netflixing in an adjourning room:

The temperatures up there in northern Europe have been consistently five to ten degrees higher than where we are in Italy, which doesn’t seem fair.

They’ve had months of fun winter sports and general cosiness, and now, as if a light switch has been flicked, a lovely spring.

Two decades back, when our first child was on the way and Stefi and I were pondering relocating from London, we had the choice between Italy – a country with poor public services, chronic unemployment and virtually no support for the ‘have nots’ or families with young children (pensioners have it lovely, in contrast) – and Sweden, the polar opposite.

Not Sweden, she insisted. Too dark and cold.

That said, I saw on the news (Swedish again) that in Spain they’re having a heatwave. It’s been lovely beach weather, apparently.

They interviewed a fetching girl in a bikini. So it’s not the whole Med, at least.

As I sit typing this, I’m wearing a winter woolly. There are plenty of tourists wandering around Bologna in shorts and sandals, but we locals know better.

One of my neighbours (now gone to a better place – not Sweden) used to remind us of a local equivalent of the old English expression:

‘Ne’er cast a clout till May be out‘.

I looked online this morning but, sadly, was unable to find the Italian version.

My wife claims never to have heard of it, though she could have been being deliberately unhelpful, having been shown to be short-sighted in her choice of climatic zone.

If anyone does know the saying in Italian, or in an Italian dialect, do leave a comment.

That’s enough moaning about the weather for one day.

Perhaps it’ll have picked itself up and given itself a shake by Friday, tocca ferro. 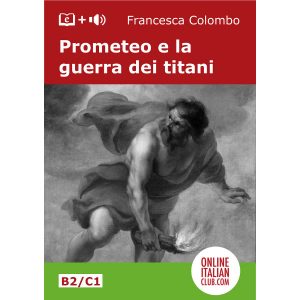 Learn about this Greek myth along with a (fictional) class of fifth-year Italian high school students. And club members from around the world, of course!

Many thanks to the twenty or so people who have already bought a copy. It’s appreciated. If anyone would like to leave a review (there are none so far…) you can do so here (and there are full instructions, with pictures, here.)

Download the Free Sample Chapter (.pdf) to get an idea of the level and length of this material.

From next Monday, ‘Prometeo e la guerra dei titani‘ will cost £7.99, like the other ‘easy readers’.

Your e-book will be e-mailed to you within 24 hours of purchase.