“She communicates so well, considering she can hardly speak at all,” my wife exclaims.

After nearly three months, Roomie and my wife are getting to know each other, and Stefi’s becoming a fan of our whirlwind of a house guest.

Anyone who’s had a puppy or a small child will appreciate how that happens: gradually, over time, and with effort from all parties concerned. At first you wonder what on earth you were thinking, then a routine starts to develop, which becomes increasingly less bothersome until, one day you realise you’d miss them if they weren’t part of your life.

People know what their pets or infants want, most of the time at least, even if outslders may have no idea.

Why is your dog pawing at the front door? Why is the baby crying hysterically?

When you’re used to interacting with someone, or something, communication either works or it doesn’t.

But repeated exposure to puddles on the ‘pavimento’ or dirty diapers, help with the decoding, the result being COMMUNICATION!

Language is a tool to speed communication up, so basically a set of shortcuts and rules to use them. It comes later in humans, and perhaps not at all, or less so, in dogs (I’m not a dog person, forgive me.)

My kiddie class, aged between seven and nine and learning English with me since they were three or four, bicker away quiet happily in Italian but are, obviously, much less able with English.

They’ve been exposed to Italian all their waking hours since they popped from their mothers’ wombs, or before, but have only had sixty or ninety minutes of English a week for a few years.

Of course then, they’re going to be much more limited in English, and the effect of that is that they learn to say less, little, or nothing, while understanding bits, or quite a lot.

That can be frustrating, but they got used to it, as do club members who persist with learning Italian.

And I learn, too – how to communicate with them. Giving clear instructions, modifying my tone of voice, sticking to a routine, being very encouraging, and so on.

Communication ‘works’ when all parties buy into making it work, something we all know how to do, if we choose to.

Also, we ‘invest’ in communication, even when no response is forthcoming (yet).

People chat to their mutts, sing to their newborns, or, like me, read the day’s weather forecast to a toddler in bed each morning (she likes to poke the adverts that pop up on the ‘meteo’ app of my smartphone.)

The kids I teach don’t expect to be able to chat away in English as they would in Italian. Just as well, really.

They’ll talk to each other in Italian, unless constantly discouraged from doing so, and they might ask me something in their own language, though without being confident they’ll get a reply – I try to only talk to them in English, as far as possible, as that’s what their parents are paying for.

When the kids really want something (a bathroom visit, a sweet, TV) they’ll ask in English, or conversely, if something’s really wrong, they’ll give up on language altogether and communicate with facial expressions, body language, or by refusing to cooperate in what they should be doing, like a dog digging in its hind legs and refusing to move.

Successful communication, in the long term, is the result of what?

Our willingness to engage with others.

Learning what works to get attention (grunts, pulling, pointing, tantrums, barking, biting) and how others get your attention in return.

Hypothesising others’ intended meanings, then confirming or reformulating your guesses based on what happens next. 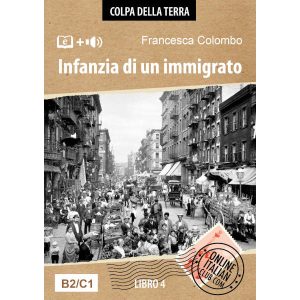 Here’s a final reminder about this week’s new ebook ‘easy reader’, Colpa della terra, Libro 4, Infanzia di un immigrato, the fourth in a five-part series about an Italian family that migrates to the USA.

The final installment of the saga is due in a fortnight.

Libro 4 is narrated by Riccardo, aged nine, merchant seaman Antonio’s second child, younger brother to Anna, who’s already left home. Riccardo and Anna are the first two members of the family to be born in the U.S.A., but things are still not going as well as the migrant family had hoped when they sailed from Napoli thirty years earlier…

Libri 1, 2 and 3 in the series aren’t discounted like this week’s new one, but here are the links, for those who missed them when they were published recently:

Here’s the usual Friday nag to read/listen to Thursday’s bulletin of ‘easy’ Italian news, if you haven’t already.

Regular skills practice is essential to learning a foreign language, and all the better if it’s FREE!

Subscribe and you’ll get every new bulletin in your email inbox, each Tuesday, Thursday and Saturday.