I’ll keep this quick, as we’re taking Roomie to the coast this afternoon, on the train (‘ciuf ciuf” she calls it)!

But, in any case, it cuts the risk of getting stuck for hours in a traffic jam on the ‘autostrada’. It’s hard work keeping Roomie entertained in the back of the car for an hour or so, so the prospect of that becoming three or four hours of start-stop ‘code’ (queues) is enough to dissuade us from using our ancient but air-conditioned Chrysler Voyager, and make braving sweaty public transport (a bus at each end of the train ride, too) potentially worth the discomfort.

Also, the coast will be five degrees cooler, according to the ‘meteo’, so hopefully all the hanging about and sweating in the thirty-three degree heat will be be worth it.

So anyway, I had an email yesterday about EasyItalianNews.com, the gist of which was, it’s very useful and so on but why can’t we make it different?

Specifically, the writer thinks it would be a big improvement if we could add a more convenient way to go back and listen to specific sections of the circa 8 minute long bulletin again. And again, and again, until she can understand exactly what’s being said. She should meet Roomie, who’s nearlly two, so also loves repetition

This diaper looks silly if I put it on my head.

EasyItalianNews.com is not FOR that, as I try to explain on the Advice page, which no one reads.

It’s FOR listening to all the way through.

It’s FOR getting people used to ‘long form’ listening so that, over time, they’ll feel confident enough to transition to authentic materials, such as live Italian radio and TV.

It’s FOR building people’s confidence that it’s just fine, and totally normal, that they shouldn’t understand every word, every phrase, every item they hear.

It’s FOR giving students the opportunity to develop ‘listening strategies’ to deal with long texts. For instance, hypothesising meaning, listening for confirmation, guessing, and above all, just pushing on, despite the stress of not-inderstanding, knowing that the more you listen, the easier it will get.

Red wine isn’t good for washing out stains with.

That’s because it’s FOR drowning your sorrows when the world doesn’t understand your work.

It’s NOT FOR doing laundry.

EasyItalianNews.com is NOT FOR listening to in small pieces, I explained to my correspondent.

“Oh, but as a language student, I find it helpful…” she replied, to which I countered, “As a language teacher, I’m telling you that the purpose of the material is…” (see above.)

And that was that, because people know best, don’t they? Including me, of course.

But “As a student”, or “As a teacher”, either way, if you’re not regularly asking yourself what stuff is FOR and recognising what it’s NOT FOR, then you are putting obstacles in your own path.

What are these articles FOR?

They’re FOR making isolated language learners in far-flung places feel part of a community, which was the original intention.

They’re FOR my own entertainment and, sometimes, they’re FOR letting off steam when silly people’s emails wind me up.

Above all, they’re FOR educating people about the process of learning (and teaching) languages.

But they’re also FOR selling stuff that I do elsewhere, such as ebooks and language courses at our school in Bologna.

Talking of marketing, what are our ‘easy reader’ ebooks FOR?

They’re FOR getting you reading and listening in Italian, if you weren’t already doing so.

They’re FOR giving you plenty of choice (of topic, of level) in your study program.

They’re FOR a certain indirect way of learning a language, in which building skills is emphasised and memorising grammar is not.

They’re NOT FOR translating. Though some people do.

Always ask what it’s FOR.

Later, ask yourself if it worked.

Did it do what was promised on the box?

Thursday’s bulletin of ‘easy’ Italian news came out yesterday. There’ll be another tomorrow (Saturday), and another on Tuesday.

There are three each week, every week, and it’s completely free to subscribe.

Besides being FOR the things I explained above, it’s also FOR keeping my kids in spending money.

Tom does the audio, Sofia the formatting and the pictures, and all three write the odd article, if they need the extra cash or if their mom, the editor, is short of material.

Given that it’s funded by donations, and especially that I don’t have to make each bulletin myself (just promote it, like now), I’m perfectly OK that it’s NOT FOR making a profit.

As long as it breaks even, that’s fine.

EasyItalianNews.com is FOR you, if you want it.

But do everyone a favor?

Use it the way it’s supposed to be used!

It’s FOR fun, it’s FOR improving your reading and listening skills, it’s FOR building vocabulary, and FOR consolidating grammar you’ve already studied elsewhere. It’s FOR adding variety to your study program. And this one, unlike the news, is FOR earning me some cash! I sell thousands of ebooks each year, and I’m hoping to one day pay myself a pension or something… 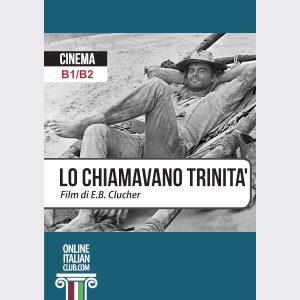 ‘Lo chiamavano Trinità’ (English language title ‘They Call Me Trinity’) is a 1970 spaghetti western comedy, filmed in Italy’s Lazio region and starring Italian actors Bud Spencer and Terence Hill (real names Carlo Pedersoli and Mario Girotti). The duo were and still are famous in Italy and Europe for the many films they made together, movies which were usually characterised by a gentle irony and by the regular punch-ups that substituted for the bloodier violence of other genres.

Giovanni Galavotti’s re-telling of the story of the film for learners of Italian makes a great introduction before watching the movie itself (ideally in Italian!) Or it can be used simply as supplementary reading/listening material which, for lovers of the wild west, is guaranteed to liven up your study program!

That’s because this week there’s a coupon code active ( 25%OFFMovieEasyReaders ), which will get you a discount on any/all of our ‘ebook of the classic movie’ easy Italian readers.

To get the new one for the usual 25% discount ‘new ebook’ price, you have to use this coupon code, as for the ‘old’ ones:

Copy and paste that, carefully, into the space in your cart and it will reduce the price of this one, and any other ‘ebook of the classic movie’ easy reader you happen to pop into your cart, by 25%, which means £5.99 rather than the usual £7.99.

Once you’re in your cart and you’ve carefully pasted in coupon code 25%OFFMovieEasyReaders and pressed the ‘Apply Coupon’ button, scroll down and check that the discount has been applied to the CART TOTAL, rather than to the individual items.