I’m thinking of a mid-level diplomat from a continental European country. A diplomat because language skills are essential to the job, mid-level because the most.junior people will lack experience and the most-senior will be judged on other things besides language competence.

Unfortunately that problably means I’m thinking about a guy, but let’s use ‘she’ to describe her. I have two daughters, you know.

Coming from a European country, she’ll have studied English at school and perhaps, assuming she went to a good institution, will have taken a series of English-language exams, gradually increasing in difficulty from elementary school, until she reached B2, C1 or even C2 as an older teenager (what school leavers typically achieve varies from country to country.)

She may have had a few years of another language such as French or German, especially if she hails from a country (Switzerland, for example) in which other languages are also spoken, or if she chose a school that specialises in foreign languages, rather than, say, science or the classics.

If her native tongue is Spanish or Italian she may have got a long way towards spoken fluency in a related language, perhaps as a result of an ‘Erasmus’ exchange – six months spent studying in another EU country as part of an undergraduate course.

Or if our lady diplomat hails from a smaller European country, such as the Scandinavian trio or Greece, she’ll have been watching subtitled English language TV since she was a small child. Unlike say her German, Italian or Spanish counterparts, who will have had much less comprehension practice.

There are dozens of factors that suggest that, at the beginning of her diplomatic career, our young woman will already have what, by the standards of people born and brought up in an English-speaking country like Britain, are considered ‘advanced’ foreign languages skills, and in multiple languages to boot.

But then she eventually starts working, and gets posted to somewhere dangerous and unpopular where, despite her command of English and a brace of other European languages, she’ll have to schmooze government officials in their own language. As part of the preparation for her posting, then, she’ll have taken an intensive language course with expert teachers of the language, perhaps at a university in a major European capital. She’ll have been a willing student, I’m sure!

There follows a couple of rather isolated years, a long way from home. Though in compensation, it’s a great chance to practice the local language with the people she meets each day, and works with.

And then, everything having worked out well in the first posting, she learns that next year she’ll be off to Asia, somewhere less dangerous but equally exotic, and with the challenge of another new language to tackle. Some months will be allocated to study it, of course, that way she’ll be able to hit the ground running!

I’m guessing the above description of someone who might, perhaps, be one of the world’s most expert and experienced foreign language learners, isn’t you. It certainly isn’t anything like me. You probably didn’t get all those advantages and opportunities, and I know I didn’t.

We studied French at school, but it might as well have been Martian, for all the opportunities we ever had to hear or speak it. And then, aged 16, end of. I don’t think I’ve done any sort of ‘proper’ language course since.

Last week I wrote an article entitled “Where did you begin? How far have you got? What’s next?” and asking for comments describing club members’ personal learning journeys. There were lots, though none from diplomats. Wonder why?

Read the comments, it’s worth it to see what others are doing. And what they’re doing wrong!

Anyway, while I haven’t done any language courses AS A STUDENT, I’ve done plenty as a teacher. I’m qualified as a teacher of English as a foreign language to adults, and over the years I’ve worked in some of the best private language schools including The British Council, International House, The London School, and multiple others, not just in Britain but in Turkey, Poland and Italy.

I’ve taught adults, mostly, but also kids, from the age of three up. I’ve taught monolingual and multilingual groups (they’re very different), I’ve taught exams, I’ve taught ‘Business English’, I’ve written books and websites for learners, I’ve taught individually the CEOs of billion dollar companies, and many of their henchpeople. For a while I was a teacher trainer, and um… I own an Italian language school.

So of course, when I read the comments, I simply ITCH to intervene, to explain to people what they don’t know, to suggest better ways.

Which brings me to the point – a new series of ‘Language-Learning Tips’, which I will, at some point put together into some sort of ‘how to’ guide, diplomats not for the use of.

They’ll be short, because people don’t listen anyway, so why waste words?

So here’s a prototype, Language-Learning Tip #01 (though they’re in no particular order):

#01 Apps and courses aren’t written for you personally. Nor necessarily well.

Take a course book, a ‘method’ with dozens of CDs, a world-famous app. Take any random piece of language-study material on the planet, including all of our stuff.

It may be great, it may not, but one thing is sure – it wasn’t written for you personally.

The best, most-willing, most-competent language-teacher in the world could have a fair stab at personalizing a lesson or course that would be as close as possible to exactly what you need right now – ONCE THEY GET TO KNOW YOU.

But courses, materials, apps are not designed for you, or even necessarily for people like you. They are for everyone, or for most people.

Besides the distinction between materials for adults and materials for kids, and perhaps a gradation in level (though that’s not a given), the intended learning path and the materials that support it are a compromise between the differing needs and preferences of many, many learners, who may not be like you at all.

Done well, for example in (some of) the best-selling English course books sold by the biggest UK educational publishers, the result is OK, but perhaps wildly inappropriate for at least some of the people who’ll end up buying them, while being not as good as it potentially could be for many others.

And that’s the best stuff.

What really counts to a publisher, an app designer, or language school owner like myself, is not that the ‘product’ approaches perfect for as many people as possible, but that it SELLS. And ideally, that it’s profitable, which means keeping input costs as low as possible.

Call me a cynic, but if people spent nearly as much of their budgets on producing great materials/training great teachers as they do on marketing, the results would be infinitely better. That’s not the way the world works, though, is it? The writer got pennies, while Google, Amazon and the taxman got the lion’s share.

The book you’re studying a chapter a day of, the app that’s designed to lure you in and keep you hooked, the lessons that you love taking with the friendly teacher, may all in fact be garbage, at least in the sense that they weren’t prepared with your exact learning needs in mind.

Don’t forget this week’s  half-price ‘eBook of the Week’ promotion, Rosa la cuoca disastrosa. The level is A1 (elementary) and until Sunday night it will cost you just £3.99, rather than the usual easy reader ebook price of £7.99. 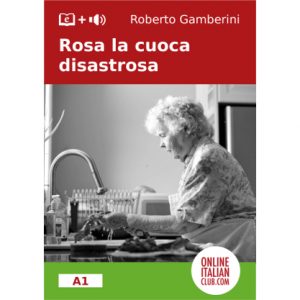 A1 means that this text is INTENTIONALLY VERY SHORT AND EASY.

Students with little or no experience of reading in Italian should be able to progress through its eight chapters rapidly, easily complete it, and so gain some confidence doing something they may not have done before.

N.b. For anyone who’s studying another European language as well as Italian, we have half-price versions of this story in German, Spanish and French, too.

Tuesday’s bulletin of ‘easy’ Italian news is FREE to access. EasyItalianNews.com is funded by donations from people who recognise that reading and listening to its thrice-weekly bulletins will help their language learning.