Yesterday evening I was teaching, or trying to.

It’s been my career, if I can describe a series of badly-paid temporary jobs that way, for more than thirty years.

For the first twenty or so, I firmly believed that if I worked hard enough, found the right materials, hit on the correct approach, and learnt from my inevitable failures, I would do the best job for my students, who would, as a consequence, learn.

So I did work hard and, indeed, got better and better at what I was paid for. I taught adults at all levels, then children of all ages, then individual students, including C.E.O.s of billion dollar companies (pre-schoolers were harder, though.)

I became a teacher manager (called ‘Director of Studies’), then a teacher-trainer, so showing others how to do it, and explaining why. Then, eventually, I opened my own school, intending it to be world beating!

Having my own school meant doing the marketing (what do you need? this is what we can offer), matching students to courses, and hiring teachers to deliver the desired solutions.

Which is where it all started to make no sense. I knew what was needed, but it seemed my clients didn’t!

With kids classes, which we used to offer from the age of three, it was evident that a slow and steady approach would eventually transform a pre-schooler from a small, mute lump into a charming adolescent with almost bilingual ability in English.

A couple of those once-preschoolers are still with me, in tomorrow afternoon’s penultimate year of high school class, which is gratifying. They’re now aged seventeen, and planning to get their English exams for college out of the way now, a year early, so things won’t be so intense next year.

But what about the ninety percent or so of kids that didn’t stick with it for fourteen whole years?

They had basketball/swimming that evening this year, or dropped out because their best friend didn’t want to come any longer.

Those kids got the teaching, and probably learnt enough to improve their school grades (another reason to drop out, why spend yet more money on private courses?) But, to us at least, they were gone, meaning no further chance to ‘teach’ them.

Some, a few, kids stayed long enough to achieve what many parents hoped for. But most didn’t. I don’t suppose they became basketball stars or olympic swimmers, either.

With adults, I can confidently assert that no one, but no one, not in recent memory at least, has studied for long enough to go from zero-beginner to C2 (proficiency). Life just gets in the way. People change job, get pregnant, get promoted, get married, whatever the reason is.

Instead, what we mainly do these days is ‘patching up’ the imperfect learning experience that today’s adults had in the school system as children. And that mostly means reassuring them that it’s OK to speak and interact, and that making mistakes is normal.

Teaching Italian adults over such an extended period (23 years out of my 30+-year ‘career’), brought me to the realisation that two things were true:

1.) Some grammar areas are, for most of our students, unlearnable, this due to the major differences between the students’ mother tongue and the structure of the foreign language they’re learning;

2.) But for most of them, that doesn’t matter. Patching people up and sending them on their ways was more than a good enough return for the time and money that they’d invested. If I could just get them back out there USING their English, instead of refusing to try, they’d be happy. And better, would likely continue to learn and improve.

Apart from this being an absolutely terrible business model, what’s wrong with actually ‘teaching’?

First problem – it may be pointless when the students’ ‘communicative habits’, transferred from their mother tongue, are too strong to overcome. For instance, Italians use the present tense for mostly everything and don’t see the need to master fourteen or more English tense forms.

Second problem – teaching may take up time which could be better spent on other things that students need more – such as practicing, building confidence, and so on.

And so I reached two conclusions:

‘Not teaching’ is often the best approach. Learning, if it happens at all, is just as, or more, likely to happen as a consequence of actually using the language, rather than sitting around analysing it. Sure, you can get good at doing exercises. But are you speaking and understanding better as a result?

But if the student nevertheless wants and expects ‘teaching’, then that’s what they should receive, even if it’s likely to be pointless. But while officially ‘teaching’, a skilled educator is busy introducing and prioritising activities that will actually make a difference.

If you want your kids to gain a black belt in a martial art, or speak fluent English as an older teenager, make sure they start young and stick with it. That’ll probably do it. Let them quit and they won’t get anywhere. You might as well spend your money on scratchcards.

But adults, who are likely not going to stick with it anyway, need to learn HOW to learn, and get as much practice as possible. Teaching is often a distraction from that.

N.b. Arguably, most of the many teachers we employ – at our Italian school in Bologna, and in our online lessons business – would wholly or partly disagree with everything I’ve written. Like the younger me, they’re invested in what they do, and want to do it as well as they can. And teachers, after all, are trained to teach.

Neither will a lot of club members agree.

Fine. Do what works for you.

But personally, when I’m interacting with a native speaker of the languages I’m learning, teacher or otherwise, I’ll always say:

“PLEASE DON’T TEACH ME! I just want to speak!”

That doesn’t mean I never need to study (I do, but mostly don’t).

Just that the opportunity to gain confidence and experience interacting with a native speaker is far more valuable than the likely benefit of an umpteenth explanation of the same unlearnable grammar point.

And both English and Italian have plenty of those!

Don’t forget to grab yourself a discounted copy of this week’s new ebook! Colpa della terra, Libro 5, La mia gente is the final part of our five-part series about an Italian family that migrates to the USA. 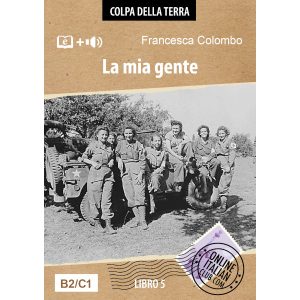 Libro 5 is narrated by Anna, the first child to be born in the U.S.A., now an adult and, by 1941, long frustrated with the lack of job opportunities and the overt discrimination shown to Italian immigrants. The outbreak of WWII hasn’t helped…

Those aren’t discounted like this week’s new one, but here are the links, for those who’d prefer to tackle the series in order:

And if you don’t read/listen confidently at B2(+) level? Not to worry – there are plenty of other ebook options from beginner upwards in our online Catalog, all with downloadable free sample chapters and FREE online audio!