Heartfelt sympathies to everyone whose Christmas/New Year plans have taken a further blow with the newest restrictions here in Europe, and in the UK of course, which is soon to be no longer Europe but is so far just as badly off.

Our eldest daughter was due home last night but only made it as far as London Heathrow, where she was told all flights to Italy had been cancelled. She, and her trolley full of Scottish Christmas goodies (stilton, newspapers, etc.), are now back north of the border, all her and our festive plans totally trashed.

And unfortunately, there’ll be thousands in the same position, plus tens of millions more stuck at home for the duration. Oh well, I guess that leaves us all more time to learn Italian (or other languages), right?

Talking of which, on Sunday afternoon I found some time to pursue my quest for the magic key to speaking Italian without the stigma of a British/American/other accent, this time by reviewing a Youtube video that club member Lars (also my Swedish conversation partner) helpfully flagged as being potentially useful.

You probably know how it is with Youtube – you watch one clip and while you’re doing so their algorithm suggests others on the same topic that might also interest you. So, not having found exactly what you were looking for, you try one of those. And then another, and then another, and before you know it, it’s after six p.m. and you’re late for aperitivo time, the beer in the refrigerator unforgivably neglected.

1.) There’s plenty about how to sound Italian when you speak English, and some potentially useful tips about how the pronunciation systems of the two languages differ. You’ll find these by searching in English, mostly.

2.) There’s niche content especially for Italians who’d like to speak their own language ‘better’. See? You thought it was only you and I that feel bad about our accents. But no – in fact – the whole of Italy seems to be hung up about how they sound.

So basically, we’ve got videos by British/American actors explaining how you too can sound authentically Italian, and videos by Italian actors and voice coaches supposedly ‘helping’ their countrymen and women achieve the exact opposite, by eliminating any trace of geographic origin. It’s easy, just enunciate! As unnaturally as possible. In such a way that would have made your middle-school Italian teacher go all gooey with misplaced professional pride.

It’s a lot of nonsense, also stereotypical and discriminatory, but who cares what I think? Go judge for yourself, and make those nice Google boys just a little bit richer in the process.

So here, for your Monday morning delectation, is my selection of delights. Accompanied by what I assure you is the absolute minimum of catty comments:

How to improve your Italian accent – Part 4

And da da! Some actual Italian ‘pronunciation experts’, mostly talking nonsense, but at least you’ll get to hear what standard Italian sounds like (for the record, my wife speaks like they do, so NOT like Sofia Loren’s fishwife.)

Italians sound Italian when they speak English, of course they do. That’s because they bring their pronunication system across from their mother tongue. Which is because their English teachers did a lousy job. Go ahead and blame me – I have broad shoulders.

Also, they worry about sounding ‘local’ when they speak Italian, so much of the advice out there is about eliminating accent rather than developing it. I know Italian teachers who have felt so disrespected by their colleagues that they felt the need to take diction courses to lose their regional accents – no kidding.

You too probably transfer your ‘English’ pronunciation system to Italian when you speak it (I know I do), and so sound like who you actually are – a Brit, a Yank, an Aussie, or whatever. Some Italian teachers integrate pronunciation teaching in their lessons from the first level, and all the way up, if necessary (as I do when teaching Italians English.) But many don’t.

Personally though, I can’t hold my teacher responsible for my British accent because, when I was first in Italy, I never bothered to take any lessons. If only I’d known, I’d have taken a course just so I’d later be able to blame someone other than myself.

But anyway, what exactly ARE the main differences between the Italian and English pronunciation systems? Some of the fundamental ones are not touched on at all by the ‘experts’, possibly because there’s clearly a lot of regional variation, in both languages. Or they’re mentioned but then glossed over, with no useful advice.

There’s plenty of stuff for learners out there about how to pronounce individual words (ie. Italian spelling > sound rules), which is basically what Italian kids get taught at school.

But there’s much less on how learners (rather than ham actors) can ‘sound more Italian’, and much of what there is is wrong, misleading, or incomplete. If I hear one more time that Italian doesn’t have any diphthongs, or that I should clearly pronounce my double letters, I’m going to scream, I swear!

And here’s a final reminder regarding this week’s new ‘easy Italian reader’ ebook, ‘Giallo a Capodanno‘, the offer on which ends on Tuesday night. 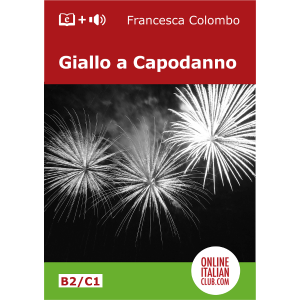 It’s New Year 1970 and Martina’s all dressed up for the party, determined to enjoy it! But her roommate, Alida would rather read detective thrillers than pretend to have fun with just six fellow students. Though who knows? Perhaps something interesting will happen?

Check out the free sample chapter (.pdf) to get an idea of the level, length and format of this ebook.

And if this one’s too hard, or too easy, pick something more appropriate from our Catalog page, where you’ll find all of our ebook easy Italian readers, from the lowest level to the highest, listed by type and in level order.

Don’t forget either that there’s lots to study, for FREE, on the club website.

Also, that you can read/listen to the three FREE bulletins of ‘easy’ Italian news, which are published each Tuesday, Thursday and Saturday (even during holiday periods.)

Subscribing to receive those via email is FREE, too.

Over eight thousand people have already done so!