A wise old man once said…

When you’re learning a language, you start off on a high.

There’s all the excitement of a new project.

The possibility of achieving great things!

The ‘up’ can quickly change to a ‘down’.

The difficulty of the task becomes impossible to ignore.

You may never achieve your objective!

That wise old man was me.

I often warn my students to expect a bit of a roller-coaster ride.

While the pyschological ‘ups’ and ‘downs’ of language-learning don’t affect everyone, they ARE very common.

Over the last few weeks I’ve been experiencing them myself!

Earlier this month I skipped nearly a week of (Swedish) study sessions.

But then I got back to it again.

I thought everything was going OK until Thursday last week, which was a disaster.

Friday was the pits, too.

Both evenings, sat at the kitchen table with my Swedish books spread out in front of me, studying was hard work.

I couldn’t remember even the simplest things!

ALL of my answers to the online exercises were wrong.

And the grammar seemed designed to confuse!

As I shouted out to my (half-Swedish) wife, sat knitting in the other room,

“You people are doing this deliberately, just to confuse me!”

Forewarned, though, is forearmed.

And I certainly couldn’t say that I’d never imagined it could be this hard.

After all, I see students struggling with this every day.

Many, many people will find a reason to quit.

They have other priorities.

The family has to take priority.

But a tactical retreat is not the only option.

When you can’t advance in the face of the enemy, digging in and defending is an obvious alternative.

Beh, if what you’re doing isn’t working, take a break from it and do something else.

Can’t get over the razor wire?

Try tunneling. Or going around the end of the fence.

The point is to do something, rather than quit.

Even if you only take baby-steps for a while, it’s a whole lot better than just turning around and fleeing!

So yesterday evening I was back at the kitchen table.

A new unit in the book, a different topic (shopping) awaiting me.

I copied out the two introductory texts (Vad shoppar du?), looked up the difficult words in Google, and then got ready to do the listenings.

Having ‘shushed’ my son, who was talking to his video game in the next room, I pressed ‘play’ and listened two or three times with the support of the text.

Then I tried it once or twice without the transcript.

My wife’s voice came from the next room:

“Can you really understand that? It can’t be easy. They’re speaking really fast!”

Bits of it, at least.

And that was good enough for a Tuesday evening!

Hope you enjoyed the sample chapter from this week’s Book of the Week, ‘Missione segreta‘. 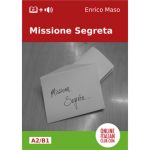 Don’t forget, you can currently get the full version for half price.