Hope you had a nice weekend!

I’m in Cornwall, England, which is beautiful, but out of the way.

It took us over nine hours in a hire car to get here from London Stanstead airport, due to traffic on the motorway/interstate/autostrada, call it what you will.

I’m travelling with two of my grown up children (Roomie stayed home with my wife as she doesn’t have a pet passport), and of course they were keen to get to their grandparents’ place and frustrated at the delays.

One has an iPhone (I spit), the other an Android, so they had duelling maps apps, both of which advised the kids to advise their dad to take a different route.

We should leave the choked up three-lane highway, apparently, and take a wide loop, through country roads towards the coast, then swing back through the glorious Somerset countryside to rejoin the highway further down, past the predicted two-hour jam.

I must admit, I was sceptical, but after the hours of stop-start traffic earlier in the journey, inching towards and around London on the M11 and M25, I was ready to grasp at straws.

Obviously I wouldn’t act on Roomie’s navigational tips (pointing and repeatedly shouting ‘La!’), but on ‘holiday’ with adult children, there comes a point when they get to share the decision-making. Sometimes that works well..

So off the M5 autostrada we turned, along with a bunch of other frustrated motorists, and wended our way along a single-lane highway to the beach town of Weston-super-Mare, ‘the seaside heart of North Somerset’.

Google/Apple directed us along the seafront, which was pleasant, and from where we could clearly see that the ‘mare’ was more murky than ‘super’. The beach is just down the coast from the Avon estuary, so I guess there must be plenty of silt. Perhaps the inhabitants of Bristol, the nearest city (the only city), like silt.

After filling our lungs with sea air, we headed back inland towards the motorway we’d escaped from, but immediately hit more traffic (a double decker bus, cyclists), with perhaps ten miles to do to get back on route.

Never mind, Apple and Google assured us, turn off here to the right, take yet another loop, this time on the a road barely wider than the car, then rejoin this congested local road further up, beyond the angry red blob on the smartphone screen.

There, due to the heavy traffic (probably people like us who’d escaped from the motorway an hour earlier), we had to queue for ages to get back on it.

I wondered aloud to my kids whether, given that everyone else got the same traffic advice as we did, perhaps it was the apps themselves causing the traffic we kept getting caught up in, while following their supposedly helpful directions. Should we have waited, patiently, on the motorway?

Could be, they agreed. So I went back to my quaint, old-fashioned navigating – looking through the window in the front of the vehicle, hoping to see road signs – and they went back to their music and video games.

An hour or so later we stopped for coffee and fuel at Exeter services, where I’d once had a miserable holiday job, serving tea and cleaning tables, while a college student nearly forty years ago.

This being Exeter, the home town I’d left as soon as I’d been able to, on the way to the men’s room I was accosted by a local who objected to my face mask:

“The pandemic’s over, mate, it’s a scam! The mask will do you more harm than the virus! You’re breathing in your own fumes!”

This was at about four p.m., so fourteen hours after we’d woken up in Bologna at three in the morning (two a.m. British time) to get a taxi to the airport.

In that time I hadn’t slept, and had consumed only two coffees and an undersized Cornish pasty.

So I didn’t react well to the yokel’s in-my-face opinioning. The beach-bound, snack-laden crowds parted around us, as we stood, at the entrance to the mens’ room, arguing.

But here we are at last, finally, in Perranporth, Cornwall.

The beach is beautiful, four cans of cider and a large bag of what British people call ‘crisps’ will set you back no more than the price of one ‘aperitivo’ (a disappointly-small glass of poor quality Italian beer and some stale snacks) back home in Bologna.

And of course, it’s raining.

Holiday or not, though, today is Monday. You probably knew.

So here, for your entertainment and education, is the link to the latest episode in our Summer Series on The Renaissance.

And this time, it features someone you’ll likely have heard of.

N.b. The previous eighteen episodes in this series can be found, along with the entire Summer Series from 2020 and 2021, from our History page.) 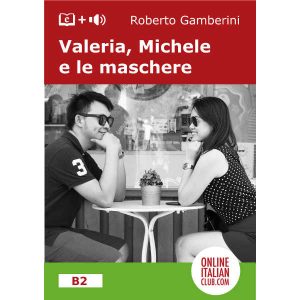 Talking of masks, this week’s eBook of the Week offer is on the B2- (upper-intermediate) level Valeria, Michele e le maschere.

Valeria has been single for months now. She meets men but after going out a few times they seem reluctant to commit, or even return her messages! She wonders whether the dating app, Tinder, might be worth a try?

Michele spends his Saturday evenings alone, playing computer games. If only he wasn’t so shy, he’d meet more people. And then, maybe find a girlfriend? Perhaps the solution is online…

Read and listen to find out!

Valeria, Michele e le maschere is B2-level, so intermediate. If your Italian is better than that, why not browse our online Catalog, to find something more suitable?

I’m on holiday, so had no trouble finding time to listen to/read Saturday’s FREE bulletin of ‘easy’ Italian news. What about you?

Being a subscriber (Subscribing is free), I got it in my email inbox on Saturday morning. And there’ll be another tomorrow (Tuesday) and another on Thursday.