They say there’s no such thing as a stupid question, which is something that, as a teacher (and a marketer), I firmly believe.

However, there’s such a thing as taking reasonable care before asking…

For example, in the FAQ of our online shop, there’s loads of useful information, organised around the most common issues people have.

“I don’t want to pay with Paypal or Amazon. Can I pay by credit card?”

If you were wondering this too, the answer is in the FAQ.

For further clarification, yes, absolutely, do email me.

That’s what I’m here for. To help people. But do try and help yourself first!

Talking of FAQs, the club website has a FAQ, too.

So that’s two different pages with information, one for the shop and one for the club. Hope you’re not confused!

Anyway, one of the Frequently Asked Questions on the club page is:

“How do I stop getting all these e-mails?”

Someone (I mention no names) wrote me on Wednesday, after I launched the new easy reader (see below), to complain that I only send adverts, and besides where were the promised three free exercises a week?

To which I sent my usual reply:

“There are loads of free materials on the website, more than most people can ever use. But if you find something that’s not there, that you need to learn Italian, let me know and I’ll pay someone to write it for you.”

To which the guy replied:

Um… the one on which you signed up for the emails that you are now complaining about?

The site has a mass of free materials that anyone can use, no registration or payment required.

The mailing list (if you’re on it, you’re a ‘member’) is there to remind you that you wanted to learn Italian and to point you in the right direction, as far as possible.

All this is also explained in the FAQ.

However, if the regular emails are not ‘gradite’ (look it up – useful word), then check out the reply to “How do I stop getting all these e-mails?” on the FAQ page.

Another emailed question this week was about listening to Italian radio, specifically, which radio station could the guy listen to that wasn’t just music all the time?

The writer had downloaded an app, but presumably not the one I had suggested, as it was all pop-type FM stations.

As I write this I’m listening to RAI Radio 1, a program called ‘Radio1 giorno per giorno’.

Right now they’re talking about a factory that’s trying to lay off four hundred workers in the north of Italy – the host is interviewing union reps and other interested parties.

Would listening to this help your Italian?

Will you understand it?

That’s unlikely, at least at first.

But it certainly won’t do any harm, and it’s free!

OK, so these are the steps I followed to get to this point with Rai1 ‘Radio1 giorno per giorno’ (so it’ll be easy for you to give it a try):

Now once I’m done writing this for you guys, I’ll switch off RAI and switch on my favorite Turkish radio station instead (Friday is a Turkish day).

I expect to understand between zero and fifty percent of what I hear, depending on the program, and how noisy my kids are being.

But here’s a tip for you, from my own listening.

Start with a quick viewing of the news headlines on a ‘news’ or newspaper website – in Italian for you, in Turkish for me.

THEN switch on the radio.

Sooner or later it’ll be time for the news, and they’ll likely be talking about the same major stories.

For example, there was a terrorist attack in Kenya this week.

I read about it (in Swedish) before getting out of bed, then heard about it on the Swedish radio news as I was preparing the kids’ lunch.

The same basic news stories were repeated throughout the day.

Multiple sources of information give you a greater chance of figuring out what the conversation is about.

To get the maximum value, try and make radio a habit.

Once you figure out what SORT of program is on at what time of day, and in particular at the times of day when you’re able to listen, then the whole thing gets easier.

On Sunday morning, while I’m cooking lunch, they have a church service on Swedish radio. I’m not religous, but I enjoy it anyway. The priests speak very clearly and the hymns and bible references are familiar.

On Sunday evening, as I’m washing up after dinner, there’s ‘Philosophy Room’, which is as hard as it sounds, but engaging anyway. Sometimes the whole hour passes and I have only the vaguest idea of what the topic is. On other Sundays, I follow it better.

And on weekdays there’s the morning program, from when I get up, all the way through until ten a.m.

It’s perfect for listening to while I’m pottering around before going off to work.

Thanks to everyone who’s already bought a copy of our newest easy reader ebook, ‘Indagine su un cittadino al di sopra di ogni sospetto‘ (Investigation of a Citizen Above Suspicion). 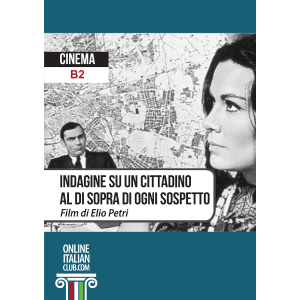 Revenues from ebooks pay the bills of the club website and help with other projects, such as EasyItalianNews.com.

That said, not all of our easy readers are suitable for students at every level, so do take a look at the Free Sample Chapter (.pdf) before deciding to buy your own copy.

If this one’s too hard, or too easy, you’ll find other options on our Catalogue page.