Today I have for you number 57 (out of 60) in our Italian Conversations series along with a great new ‘Book of the Week’ offer, about which more later.

The new dialogue is about renting a room: In viaggio, Affitare una stanza

Listen to it here. Or find it on our Italian Conversations homepage. 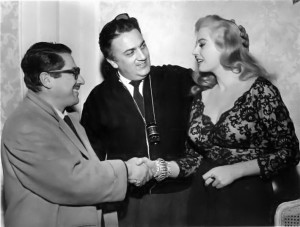 So, this week we’re having a Fellini special!

If you can see the image here on the right, that’s Federico Fellini in the middle, along with Swedish actress Anita Ekberg.

Fellini is probably THE  most famous Italian film director, so definitely worth knowing something about… As usual I’d recommend Wikipedia. Here are links to the pages about him in Italian and in English (obviously, you should give the Italian a try first…).

So, our ‘Book of the Week’ this week is our easy reader/e-book re-telling of what is probably Fellini’s most famous film, La dolce vita (The Sweet Life), which won him an Oscar for Best Director back in 1960. Download the sample chapter (.pdf)

It’s probably worth me mentioning that this isn’t an easy story to retell – when I first watched the film back in 1999 (hoping it would improve my Italian…) I was left scratching my head and rather disappointed.

Here’s a line from the film’s Wikpedia page which might give you an idea of why:

Abandoning traditional plot and conventional “character development,” Fellini and co-screenwriters Ennio Flaiano and Tullio Pinelli, forged a cinematic narrative that rejected continuity, unnecessary explanations, and narrative logic in favour of seven non-linear encounters between Marcello, a kind of Dantesque Pilgrim, and an underworld of 120 different characters. These encounters build up a cumulative impression on the viewer that finds resolution in an “overpowering sense of the disparity between what life has been or could be, and what it actually is.”

Hence the quote from one of the film’s alienated characters that forms the title of this article “Sto bene solo quando faccio l’amore” (I’m only OK when I’m making love.)

So, not really ideal material for an Italian easy reader, at least not in the sense of having a clear narrative and a small cast of obvious good guys and bad guys.

But re-reading it and listening to the audio (weaker in chapter 1, but better later, so do persevere) I thought Giovanni’s retelling of this 1960 classic works remarkably well. Certainly, the more often I come back to the story, the more it seems to say.

Anyway, before you click the the sample chapter link (.pdf), I’d just mention that my reason for choosing ‘La dolce vita’ this week is that we’ll hopefully have a new e-book/easy reader out next week, also based on a Fellini film…

But more about that on Friday, assuming that there are no last-minute delays.