LAST Friday was my wife’s birthday and we organised a surprise party. My part in the enterprise was to make pizzas, amongst other things.

I figured, given that it was a party and we were expecting plenty of guests, I’d do both the version in the metal trays, the type you slice into rectangular pieces (pizza al taglio) and the proper, Naples-style pizza, which is disk-shaped, much thinner and abbastanza more work.

By this time (10.30 a.m.) last Friday, I’d got both sets of dough (several kilos) doing their first rise, had my weekly one-to-one Turkish lesson via Skype, and was now cracking on, making English-style ‘pastry’, which, interestingly, is impossible to translate into Italian – and I should know, because at least a dozen party guests asked me what it was.

The closest Italian term is ‘pasta sfoglia‘ (literally ‘leafed pasta’) which is what they call what we call ‘puff pastry’. But that wasn’t what I was making (mine was for pies, so no puff was really required, and I was too short of time for faffing around…)

Sometimes with foreign languages, there just isn’t a way to say a thing, you just have to admit defeat, bite your tongue, and agree, well yes, it’s something like that.

So where was I? One of the party guests was our neighbour, Guido, who’s the super-confident, body-builder type (think a younger Arnold Schwarzenegger, but with an Italian accent, and you won’t go far wrong.)

Guido had been sent over by his wife, who’d been there for the beginning of the surprise party but had to go back to the kids. “Try the pizza” she’d instructed (the Napolitan one, obviously.) Guido’s a bit of a cook himself, and recently circulated a video of himself unsuccessfully attempting to spin pizza dough into a disk, mid-air.

It was good, he admitted generously, and asked for the recipe. Two days later, it was HIS birthday and Stefi was complaining that they always gave us nice things and all she had for him was a pot of some new-fangled ‘face cream for guys’ -type gloop.

So I wrote down my version of the ‘Ricetta originale dell’impasto per la vera pizza Napoletana‘, got Stefi to translate it into a less-macaronico form of Italian, wrapped a lump of fresh yeast in it, and took it over to his Sunday-evening birthday aperitivo as an additional gift.

It’s probably not your birthday and, unlike Guido and I, you might have no interest in pizza recipes (or already have a good one, like my Turkish teacher, who’s married to a guy from Napoli.) But what the heck? I thought I’d gift it to you, too!

Besides, and by absolutely no coincidence, on Monday we’ll be publishing a new ‘easy Italian reader’, a story set in Napoli which, among other plot twists, retells the long history of pizza. Bet you can’t wait.

Details of that one on Monday, though. Nel frattempo (two ‘t’s, thank you spell-checker)…

For anyone interested, the ‘pizza al taglio receipe uses cheaper flour, much more yeast (x 20!), a little sugar and a dash of olive oil. It’s easier to work and gives a more ‘deep pan’ effect, but both types got polished off by our party guests.

So if you have an idle moment over the weekend, don an apron and give it a try.

Or wait for a week, read the pizza book first to get some inspiration (its recipe is different again), THEN hit the kitchen!

And here’s your final reminder about this week’s half-price A2-level, Book of the Week, L’amore ai tempi del supermercato. 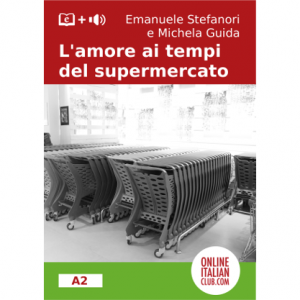 Download the Free Sample Chapter (.pdf) to get an idea of the level and format of the material.

In the .pdf there’s a link to the online audio, so you can listen to all eight chapters, absolutely free of charge, if you so wish.

The full version of the text, until Sunday night at least, is available for just £3.99 – after which the ebook price will revert to the usual ‘easy reader’ £7.99.

Thursday’s bulletin of EasyItalianNews.com is ready to read/listen to.

Today is the last day of the month, which means that tomorrow I’ll be totalling up exactly how much producing a month’s worth of ‘easy’ news stories has cost us.

If you’ve been using the material in your learning, and had in mind to help us out with a donation but hadn’t yet got around to it, today would be a good day… There’s a link below.