No, not THAT sort of exclusive club, silly!

I was listening to a marketing podcast yesterday evening, and the interviewer made some remark to the guest along the lines that normal people these days (so you and I) get served by algorithms such as voice mail or A.I. (artificial intelligence) systems rather than by actual people.

Think home-banking, which I’d say is way preferable to actually having to go to the bank, then waiting in a line.

Or, given that I’m suppose to write about language-learning, Duolingo.

Eight billion people are learning Italian on their system, they say.

They expect the planet’s other two billion would-be-Italian-speakers to catch on next week.

Home-banking is impersonal, compared to chatting with the cashier, but who cares? It’s much more efficient, and is effectively free.

Duo has community interaction designed in, which is impressive and all credit to them. And it’s also free, unless you actually go out of your way to pay for some extra or other.

In fact, with the exception of phone and internet companies here in Italy, which are utterly and demonstrably awful when it comes to dealing with any sort of service issue whatsoever, the world is bursting with products and services that  make our lives easier and more stimulating and which are both better and cheaper than what used to be available.

The podcast presenter went on to say that, these days, only the rich, or at least the well-off, can afford to actually have a PERSON deal with their problem for them.

If you need to get from London to Bologna, then Ryanair has a reasonably-priced solution.

But, other than the traditional ‘Hello’ from the flight attendant as you board, don’t expect to interact with anyone from the company along the way.

You’ll choose your flight, book your tickets and make the payment on their website or app.

You’ll print your own boarding card.

You’ll carry your own bag (if you can afford to take a bag – personally, I put on enough pairs of underpants for the entire trip, then take off the outer layers when I arrive and put them in the drawer in my hotel room.)

Were I rich, I could hire a private plane, or fly first class on BA, at which point I could reasonably expect to have an attractive flight attendant serve me ‘free’ drinks and chat for a few seconds.

(And wouldn’t have to wear six pairs of underwear.)

But I wouldn’t get there any quicker.

That’s not true for every service, of course.

With language-learning, for example, it’s fairly evident that taking a class or a one-to-one, with a real teacher, will give you more experience dealing with and responding to ‘live’ Italian than, say, an app.

It costs more, but it’s not only for the rich.

It is, however, EXCLUSIVE.

Of those eight billion people using the app, how many have actually taken the logical next step to speak Italian in real time with other humans?

How many are leafing through an Italian newspaper over their breakfast toast and coffee?

Or listening to Rai Uno while they walk their dogs?

I don’t actually KNOW this, but by looking at the competition I can get a reasonable idea.

I’d say there aren’t more than a few tens of thousands of people around the world doing one-to-one online Italian lessons  (which is presumably why DL doesn’t bother with them – venture capital isn’t dumb.)

And the average print run for an easy Italian reader?

You could go ask Black Cat, but given that I never see any marketing (and if they don’t bother to pester me to promote their stuff, then they’re probably not bothering at all), there can’t be much money in it.

So say a few thousand copies a year worldwide?

As Led Zeppelin put it in their cheerily mysogynistic classic ‘Dazed and Confused‘:

“Lots of people talking, few of them know…”

Which brings me to the point. 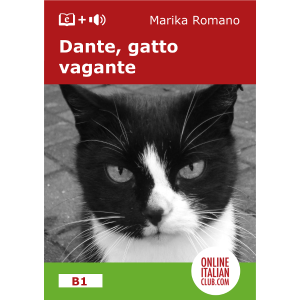 A grand total of fifty-nine people have so far purchased our newest ebook, Dante, gatto vagante.

Add me, Francesca the writer, Stefi the editor, and Natalia, who did the audio, that makes sixty-two of us, spread fairly evenly around the world.

The writer’s in Spain, the audio was done in London and most readers are in the USA, Australia or Britain.

Much more so than private jet owners, of whom there must be a few tens of thousands.

Membership isn’t even that costly, as Dante is on offer until Sunday.

Thursday’s FREE EasyItalianNews.com was read by Stefi (my wife) rather than Tom (my son), as the lad’s off on a trip to Rome with his school.

Three nights to stay up late playing cards with his mates! And perhaps take in the Vatican to say ‘Ciao’ to the pope.

Do you have problems waking up, too?

Wednesday I got told off for stereotyping older people in my poem (scroll to the bottom if you missed it.)

You guys are obviously all unfashionable, incapable, poor, ignored, liable to get chewed up by technology, etc.

Beh, yesterday I was wandering around Bologna, where I live, and the city was full of kids on school trips, but also of stylish, healthy, well-dressed, confident, happy, rich-looking PENSIONERS from all over the world, eating and drinking at sunny tables in the streets, shoppping in exclusive shops and so on.

So there, hope that evens things up.

Today I’ll be stereotyping some other group, namely the chronically-sleepy, of which I am a life-long member.

Feedback is welcome of course.

Other than the campaigner for the third age that I mentioned, on Wednesday a lady wrote to suggest I didn’t give up my day job running OnlineItalianClub.com, which I assume she meant kindly.

Anyway, us poets need to grow thick skins, so do your worst.

It’s only fair, if we get to sit in the sun tapping verses out on our smartphones while others are locked in their offices.

+++
There was a poem here. Now it’s here: https://onlinepoem.com/coffee-cools-at-a-predictable-rate/