Pontius Pilate, remember him? Sure you do! From Sunday school, probably.

If not, though, a quick glance at the every useful Wikipedia will tell you that he was “the fifth governor of the Roman province of Judaea, serving under Emperor Tiberius from 26/27 to 36/37 CE.”

History doesn’t have much else to say about the guy, other than what your Sunday school teacher told you. But we do know that, at a certain point in his long career as a minor official in the Roman empire, he had a bad day (or year) and so was removed from his post and sent back to Rome to explain himself to the boss.

But then, a stroke of luck!

By the time Pontius Pilate got to the capital, Emperor Tiberius had died.

Phew, meno male, as Italians would say, and “most modern historians believe that Pilate simply retired after his dismissal”.

Which brings us to today’s article in our 30-part series, ‘La storia di Roma‘, on Christianity, of course.

Find out, if you didn’t already know, how an obscure new form of ‘culto’ (used in the Italian sense, so don’t write to complain until you’ve read the definition and understood that the word has a different meaning from the similar but perjorative, English term) went from zero to become the official religion of the Roman empire, in not much over three hundred years.

Destiny maybe, or perhaps simply political expediency. You’ll decide for yourselves, I’m sure.

Thanks to everyone who has already bought a copy of this week’s new (and very pagan) ebook, ‘I racconti della vestale‘ 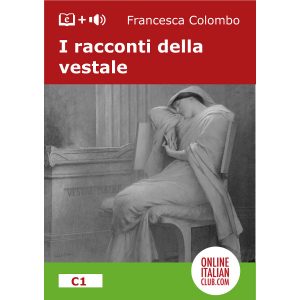 Check out the free sample chapter (.pdf) to get an idea of the format and verify if the level (it’s fairly advanced) is appropriate for you.

N.b., and as mentioned on Monday, we have a new ‘PAY BY CREDIT CARD’ option in our online shop, and it doesn’t involve Paypal, which has been causing people problems lately. It works well, so if you’ve had problems with payments before and given up on us, why not give it a try?

And importantly, please don’t forget that, as an experiment, the new ebook ‘I racconti della vestale‘ is offered as an automated dowload, which means I don’t have to send them out manually as an attachment to an email. This innovation is described on product page thus:

I worry, though, that regular customers no longer take the trouble to read the small print, and so may be scratching their heads and wondering what I’m playing at, by not sending the usual email with the ebook they purchased attached, within the promised 24 hours.

Guys! The download link is on ‘Order Received’ page, to which you are redirected once payment is complete. AND it’s sent in an email, with the subject line “Your EasyReaders.Org order is now complete”. Do take a look in your inbox before emailing me…

Tuesday’s bulletin of ‘easy’ Italian news is ready for you to read/listen to. And it’s FREE!