Before I start trying to sell you something, many thanks to the club members who wrote in about the invasion of the black blobs, which has now been successfully repelled.

A particularly honorable mention goes to Andy, who shared his thoughts on what may have been causing the problem over the course of several emails. Though he didn’t quite pin the cause of the problem down, his theorising and research gave me the vital clue that enabled me to figure out what the company that hosts the website had done to cause all the trouble.

After which I chastised them until, late on Friday evening, they fixed it. Which was a relief!

Thanks again, Andy, and to everyone who wrote to confirm that the problem existed where they lived too, and on subsquent days to tell me that they couldn’t see any issue: “The black blobs never got as far as Tasmania”, apparently, or perhaps they did but someone was tardy opening her emails that day…

Anyway, on with the show! As mentioned last week, today we have a super-advanced (C2-level) ‘easy Italian reader’ ebook. 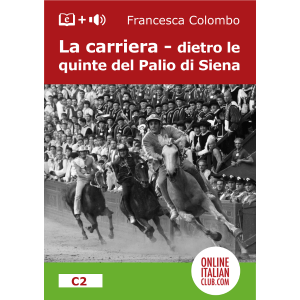 OK, now before I proceed, I will tell you that this one is chock-full of words and expressions that I didn’t understand, not that I let that bother me in the slightest. In fact, I’d read it three times before I wondered about the jockey’s nickname ‘Il guercio’ and, trying to make more sense of one of the scenes, I looked it up at WordReference.com (so there, now you don’t have to.)

And as I’m in a generous mood, let me help you with two other expressions, both in the ebook’s title: ‘La carriera’ is the name of the horse race, and yes, of course, it does mean ‘the career’ but, as in English, there’s clearly another meaning – ‘to career’ – which, Google tells me, is “to move swiftly and in an uncontrolled way”. It’s that very lack of control that makes the race so exciting, I suppose.

‘Dietro le quinte’ was clever of the writer, I thought. It means ‘behind the scenes’, literally, or ‘backstage’, but has the double meaning of ‘agire di nascosto, senza scoprirsi‘ (to act in secret, without being discovered). Backstage goings on at a horse race? Whoever would have imagined?

La carriera – dietro le quinte del Palio di Siena is a terrific story, and well worth the price (just £5.99 this week) IF you are a confident reader and tolerant of there being lots of words and expressions you won’t know.

If not, don’t let yourself by lured by the 25% discount – select something more suited to your current level from our Catalog page, instead. The extra money gets you ‘simplified’, which can help a lot!

Either way, do check out the free sample chapter (.pdf), which will give you a good idea of the level, length and format of this material. This is one of our longest stories, I think.

Two other things I should mention, both of which came up in emails from ebook buyers over the weekend (I love answering emails on a Sunday afternoon, don’t you?)

First and foremost, on every ebook product page in our online shop you will see the sentence: “Your e-book will be e-mailed to you within 24 hours of purchase.” (To view the product page, just click on the ebook cover image.)

Now what this means is, unsurprisingly, exactly what it says.

Mostly I manage it within a couple of hours. I allow myself extra time because I might be in bed, or even on a plane, at the time of your order.

But if 24 hours have passed, 99.99% of the time, I will have already emailed your purchase to you. So if you don’t see it in your inbox, CHECK YOUR SPAM!

The subject line of the email is always the same:

ATTACHED: Your ebooks from EasyReaders.org

Then, after say 48 or 72 hours, when they’ve got into quite a stew, they write me a very polite (but actually quite shirty) email, wondering when I’m going to send the ebook?

“After all,” they protest, “I received an email saying ‘Your EasyReaders.Org order is now complete‘ but actually it’s not. Where’s the download link?”

I still have hair, which is handy because I can rip some out in moments like this. Our ecommerce system sends the ‘Your EasyReaders.Org order is now complete’ when I press a button. Which of course I do AFTER I have emailed the ebook. Hence the word ‘complete’. And there’s no download link!

Got that email? No need to wait another 48 hours to see if the ebooks appear, then. This is not ‘Posteitaliane‘. “Within 24 hours” means precisely that. If you don’t have your ebooks in your inbox, in an email with the subject line ATTACHED: Your ebooks from EasyReaders.org, then 1.) check your spam and any other place it could have ended up (remember to check the right email account if you have more than one…), then 2.) write to me and I will resend the email with the modified subject line RESENDING: Your ebooks from EasyReaders.org.

Magically, that one always gets through.

Since the weekend, there are four great-value new ebook ‘bundles’ in the shop!

Or look at the special, money-saving ‘bundles’ page, where you’ll find other levels, too.

Did you listen to and read Saturday’s bulletin of ‘easy’ Italian news?