I feel a rant coming on, though it’ll have to be a brief one as I have a conversation lesson starting shortly (Friday mornings is Turkish!)

Yesterday’s first (now online) English lesson was a fantastically-fun group of three teenage girls, by which I mean that they are stimulating to interact with and, with a little work, open to new ideas.

Younger children are fun too, but react in much more predictable and limited ways (my second class of the day comprised five six-year-olds, with their parents/babysitters looking on and not-managing to restrain themselves from helping…)

Most Italian adults, who I mostly teach, are sadly past that rebellious, questioning phase that so characterizes teens, so tend to all have the same (rather boring and conventional) opinions, to which they cling.

Me, I’m an iconoclast at heart (if you’re not familar with the word, look it up, as it’s a good one), so both the little kiddies’ groups and the staid, overly-respectful grown-ups offer little by the way of entertainment.

Let me loose on a group of bored teenagers, any day! Hopefuly, the result will often be a thought-provoking and authentic interaction (in English, of course.)

So anyway, one of the teens said something that began with “My Italian teacher said…”, which usually works like waving a red flag at a frustrated bull.

What the esteemed educator had said, apparently, was basically the usual self-serving B.S. that state-school Italian teachers always come out with: that it’s IMPORTANT that all their pupils learn to speak standard Italian PROPERLY (of course, dialect is BAD), that they should at all times use the congiuntivo CORRECTLY (even though certain populist politicians find there are votes to be gained by not doing so) and that, above all, they should STUDY and PASS TESTS.

If you’ve been fortunate enough to avoid the Italian state education system you may be wondering what’s so bad about studying and passing tests. The problem is that this seems to be (mostly) ALL they do.

It’s years on end of memorizing facts and get tested, again and again! Don’t believe me? Try this test, and you’ll see.

Ask an Italian (one who went through the school system here), any Italian adult basically, what they think of English literature. They’ll answer either ‘wonderful’ or ‘boring’, which will tell you a lot about whether they were, as children, eager-to-please would-be clones of their teacher or bored to the teeth and praying childhood would end soon. Wait, though. The test hasn’t started yet!

Now ask them to name a few English poets, novelists, and playwrights. I SWEAR, they all can! Because they’ve all, the whole F-ing country, memorised the ‘greats’ of some other country’s literary culture.

Why? Well ‘culture’ obviously. And ‘wonderful’ or similar is the CORRECT response, though ‘boring’ is predictably common.

What’s the purpose of all this memorising, all this drumming culture into little heads, whether they like it or not?

And the effect is to shape unimaginative future generations of Italian teachers who will willingly replicate their own brainwashing, but will never do, or write, or question anything, whatsoever, themselves.

Did you know? I asked my class, that Italy has (or had – my data might be old, though I doubt it) the lowest rate of newspaper readership in Europe?

Why do you think that might be? Newspapers are boring, right? And hard to read? Newspapers here are for the politically-obseessed, not for ‘normal’ people. While writing, the ‘correct’ way, that they write in newspapers, that your teacher is talking about, is hard.

And so only for ‘proper journalists’ (you have to join the union to be a journalist in Italy…) Reading and writing is not for normal people, not for us.

What irony. You spend years STUDYING (English) literature at school, memorising the names of our poets, novelists and playwrights, for ‘culture’, and yet you never actually READ or WRITE anything for your own satisfaction.

Exams in Italian schools are mostly oral rather than essays, so the very act of putting pen to paper, or fingers to keyboard, is unfamilar. And of course, ‘creative’ writing of any kind whatsoever is as rare as hen’s teeth. In the process of ‘socialization’, the children are recipients, active parties only if they collaborate with the sowing of ‘correct’ ideas.

When I was, I don’t know, maybe about ten, I related to my class of three, our teacher at school asked us to write a poem. They looked unimpressed – how could a ten-year-old write poetry?

He didn’t start by TEACHING US ABOUT POEMS, or at least, not that I remember, I explained. He just gave each of us a blank sheet of paper and a pen and told us we couldn’t go out to play until we’d written something. The teens gave me sympathetic looks.

To cut a long story short: in Italian schools the ethos is that you have to know stuff first, THEN do it, the result being that most people never do, but that the educational elite retains, without much real effort, their shield of superior ‘knowledge’.

Whereas in other places, at least I hope it’s still like this, people write (as I am writing this) without having been given ‘permission’ to do so, without having been taught to do so ‘correctly’, according to some secret codice known only to a select group of ‘teachers’, and certainly without having paid their dues to the journalists’ union.

And so they write with enthusiasm, sometimes perhaps even well (“where did Shakespeare learn to write plays, kids? I rest my case”), but often with passion.

Reading is the same. Kids around the world consume the million volumes of ‘Harry Potter’ because they want to, not because it’s somehow ‘good for them’ to do so. And often, the result is they develop a reading habit which pays back their whole lives, in terms of ease of access to the world around them.

And yes, I told them, I’m aware of the contradiction of me, a teacher, telling you to question what your school system insists is the ‘right way’.

But I’m also a ‘learner’. And I ‘learnt’ most of what I know by doing it, by figuring it out for myself, and by gradually, over the years, getting better and better at it. Not by being ‘taught’.

Ask your Italian teacher, I urge them, what s/he has written, then judge for yourselves. Better still, go write something, go read, go create!

Conclusion? There is no ‘correct’ with language. Language is a ‘code’ that we, a community of people who use it to express ourselves (esprimersi), share. There’s no right or wrong. Shakespeare (again) made up lots of words, sat back, and listend to paying customers handing over the cash for theater tickets.

Children, you need no permission to speak Italian, do you? Then nor do you need to pass any sort of exam to read it or write it. And they only thing that makes something ‘correct’ about the way you use your own language, or mine, is whether it is ‘effective’, in the sense that it communicates what you intend.

Here’s a final reminder about this week’s half-price ‘eBook of the Week’, ‘La vita è bella’, which lots of people have already snapped up. You have until Sunday night… 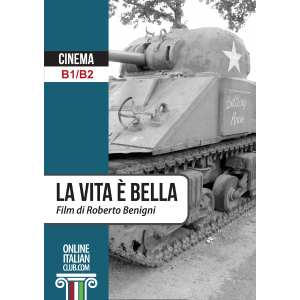 And Thursday’s FREE bulletin of ‘easy’ Italian news is here.