My, it’s been such a busy week, I’ve barely had time to squeeze in my own language studies!

Which is a problem, as I’ve signed up for the A2 Swedish exam in Milan on Sat. 15th and so REALLY need to sort out my grammar.

I’m probably beyond hope, though. While I’ve been studying for nearly two years now, I still can’t get the definite and indefinite articles straight in my head!

That said, there is something to be said for being a language STUDENT as well as a language teacher.

For one thing, it’s a great way to see problems from a different perspective.

For example, yesterday I was sat on the reception desk at our Italian school when a woman came in for information.

She told me she needed to boost her level, prior to an up-coming holiday, but didn’t have time to do a ‘course’ and so needed to book some individual lessons.

I told her the usual thing, that a group course would be better value, that she could do more hours for the same cost, and so maybe make more progress for her investment.

But she explained she needed the flexibility that individual lessons offer. She could only be available at a specific time of day and, anyway, wanted to focus on certain areas which she felt she hadn’t mastered during a group course she’d done previously.

Fair enough, I thought. That sounds rather like MY situation!

I’ve been doing individual Swedish lessons online for ages, and it’s worked well for me. Sure, group courses DO offer better value, but there are all sorts of reasons why they won’t suit everyone.

Comunque, one of the reasons I haven’t had time to study this week is that I’ve been busy sending out ebooks and dealing with the customer service queries that arise.

A typical exchange is:

“I sent it to you a week ago. Check your inbox for an email from this address.”

And waiting for me most mornings, as I drink my breakfast coffee, is something like:

“I ordered and paid for an ebook 2 hours ago! But I haven’t received it yet. Please help!”

“Yes, it says on the website that you should allow 24 hours for me to send it to you by email. Your order was received at 3 a.m., when I was asleep. Now it’s morning and I’m viewing the orders that came in during the night. I’ll deal with yours immediately. You should have your ebook in a few minutes. Buono studio!”

Customer service is a vocation, they say.

But I also get plenty of emails along the lines of “I’m depressed. I’ll never learn Italian! What should I do?”

I usually try to reply with something encouraging, which has got MUCH easier since I’ve been a student myself.

I know exactly how you feel!

So here are a few laments I’ve heard since Monday, along with a few words of advice for each:

“There are so many words I don’t know.”

Better get used to it, then.

Learn to figure out the possible or probable meanings from the context, if you can.

Guess, or if all else fails, just skip it! Most of what you read or hear isn’t so critical.

Keep at your studies and things will improve, gradually at first, then more rapidly.

One day you’ll know enough words to get by in most situations. But you’ll never know them all.

Think of that as a positive thing!

It’s the journey that counts, not the destination, right?

“I can see a word a few times but don’t recall its meaning.”

Great! That’s the way your brain is supposed to work. Thank your mother for not overdoing the gin when you were a foetus.

And then, consider that, given that a language might have hundreds of thousands of words, with perhaps millions of distinct meanings and uses in total, it would be GROSSLY INEFFICIENT were your brain to work any other way.

If you tried to process and remember each unknown word, as soon as you encountered it, you wouldn’t be much fun to be with.

Heard of the famous Windows ‘Blue screen of death?’

That’d be you, with all your circuits overloaded, a blank expression on your face, and steam coming out of your ears.

Now, if you’ve seen a word a hundred times, in different contexts, and you STILL don’t understand it?

See a doctor. It could be early-onset something medical.

“I don’t understand what people say to me.”

Well, I’d say that was fairly usual if your interlocutors are speaking a language that is, well, FOREIGN.

The clue’s in the word.

The most successful learners, apparently, are the happy-go-lucky ones.

They’re just having a great time, they smile at everyone, and they’re definitely NOT going to get fazed when they miss something.

And because they’re so much fun to be with, everyone is nice to them, and willing to help them out when necessary.

Hence the usual advice when you don’t understand what someone is saying: nod, and smile!

If it’s something important, the speaker will typically double-check that you’ve got it.

At which point you can admit that you had no idea what he/she was saying. Which can be embarassing, but is usually dismissed as a misunderstanding.

“Do you REALLY understand?”

“Well, why did you say you did then?”

“Oh never mind. We’re meeting at the BAR at FIVE this EVENING. Got it now?”

Try asking for an explanation EVERY TIME you don’t understand something and see how far that gets you.

“I am not fluent as I would wish.”

Bet you that, when you started learning Italian, you’d have been just over the moon to be able to use your newly-minted language skills to order a beer and understand how much it would cost you.

Whereas now? You want to chat about politics with the barman. And feel frustrated that you can’t say everything you like to, as easily as you could in your own langauge.

Admit it, that’s not very realistic.

E poi, no one is EVER 100% ‘fluent’ in every situation, even in their own language.

If you had to stand up now and make a speech in your mother tongue, say at a wedding, how ‘fluent’ would you feel?

You’d probably want to write down what you were going to say, or at least make a few notes. And you’d surely want to practice a few times first, right?

In Italian you’ll feel ‘fluent’ when things are familiar, in situations which occur often.

But that doesn’t mean you’ll be speaking accurately, or coherently.

Very occasionally, someone will tell me that whatever I had been attempting to communicate to them in Italian (say for example I’m running a training sesson for our teachers) was absolutely clear and effective.

That’ll usually be right after I’ve been lamenting to myself what a mess I’d made of it.

Take it from me: feeling fluent is relative and is, in any case, not necessarily a good guide to how you’re actually performing.

“I don’t feel that I’m making any progress.”

It stems from the fact that you are an APPALLING JUDGE of how much progress you are making.

You probably don’t use any objective data to measure what you can do.

And you’re likely comparing what you can do now with what you’d LIKE to be able to do in the future.

Rather than making the much-more-helpful comparison with what you could do previously, say six months or a year ago.

If you REALLY want to know how much progress you’ve made, are making, will make, then set up some way of properly measuring that.

I often write about how to do this: work up through the levels with our easy readers, for example.

Do a month at a low level, reading and listening to a different ‘reader’ each week.

Then step up a half-level for month two. Do four more stories.

And up another half-level for month three, and so on.

After three-six months have passed, go back and read/listen to one of the texts you began with.

I promise, you’ll be AMAZED at how much progress you’ve made.

Or do an international exam, as I’m doing.

The one I signed up for is A2.

If I pass, I’ll have an objective measurement of what I’ve achieved in the last two years.

This is a harder one, I admit.

But if what you’re doing doesn’t give you pleasure, perhaps you should look for an alternative activity that will, nevertheless, help you progress towards whatever your goals are?

Or change your goals.

You could, for example, stop worrying about all the words you don’t know, and how fluent you’re not, and get on and actually USE your Italian for something.

Or find a nice teacher, someone who will tell you how marvellous you are and how amazing it is that you’ve made so much progress!

Some students need to hear that.

Others like to be told that they’ve used the wrong bloody article again and why the hell don’t they pay more attention?

So if you need some help staying interested and positive, make sure the teacher you choose is appropriate.

If not, ditch them and find someone more supportive, or critical, or whatever works best for you.

Have you had time to order this week’s -50% ebook easy reader deal yet? 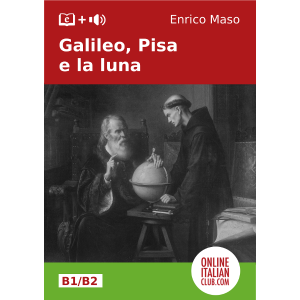 Pisa, 1690. Academic and university teacher, Galileo, is re-thinking Aristotle’s idea that the heavier an object is, the faster it will fall to earth. With the help of his reluctant assistant, Valerio, and the city’s famous leaning tower!

Our ebook team really liked this one when we published it a few years ago, so do take a look!

Download the FREE SAMPLE CHAPTER (.pdf) to get an idea of the length and complexity of the Italian text.

And check out the online audio (there’s a link in the free sample chapter).

Listening to something in Italian each day, or as often as possible, is the only way that your comprehension skills are likely to improve…

Other ebooks like this one, based on the lives of famous people, can be found here.

Why not read them ALL?

That would really give your Italian reading and listening skills a boost!

Or, if historical figures aren’t your thing, select something that interests you from the catalog which lists all our ebooks, organised by type and listed in level order.