The last year and three-quarters hasn’t been ‘normal’ at all, I think you’d agree.

Which makes it particularly difficult to work out what’s going on with the club website, and with the other websites we run.

During the lockdowns, we had some of our best ever numbers, and lots of participation (for example, in the book clubs we did in the spring of 2020), whereas lately, traffic to the club website has fallen by up to a half.

That rather suggests that people needed a distraction when they were stuck at home, but lost interest, or no longer had time, once things returned to ‘normal’.

That’s certainly been my personal experience – up until the beginning of the summer I was actively learning (by which I mean reading, listening to, and doing conversation lessons in) four languages: Swedish, Turkish, Spanish and French.

Since going back to teaching, and for various other reasons, I’m now down to one, maybe one and a bit. Temporarily, I hope!

Language-learning hasn’t been the only thing that’s fallen by the wayside since the lockdowns ended – I paid a year’s subscription on a popular Chess app, which I used for two months and haven’t had a second to look at since.

Also, I’m a long time Economist reader. I used to devour each weekly magazine, from cover to cover, sucking the juice out of every single article. But now I only have time for the topics that really interest me, and often not even those.

And yet, interest in our Italian school’s 2022 promotion has been good, despite the alarming rise of the Omicron variant.

When I type ‘learn Italian’ into Google, there seem to be plenty of paid adverts still.

And scrolling down to the ‘organic’ search results (so not the paid-for ads, and excluding Youtube, which is owned by Google itself), the first result is the industry giant Duolingo, but right after them, with their stock market listing and thousands of boffins, is our little club!

Naturally, I was curious to find out if DL’s traffic trends were similar to ours, so I looked first at their 2020 Language Report, which is definitely worth a read if you’re interested in language-learning.

And no, their numbers are up, up, up, apparently. That’d be the boffins. Which is what I’d feared – websites are dead! These days, people use apps on their smartphones, or follow ‘language influencers’ on their preferred social network, more fool them.

And DL, of course, is king of the apps! They have a website, too, as witnessed by the fact that they sit on our shoulders in the Google results, but… envy… Bet they’re just coining it it!

So I typed in ‘Duolingo Annual Report’ to see how substantial a fountain of gold must have resulted from the thirty million new students they picked up during the first year of the pandemic, and the many others since.

Yet no – this press release, which describes their performance in the third quarter of 2021 (so up to 31st October 2021) – while confirming their ‘extraordinary performance’ in ‘continuing to grow rapidly’, rather shyly admits that, by most normal measurements, they aren’t making a profit.

And that, judging by their recent diversification into providing English certifications for learners around the world (a seriously competitive arena, and one I know well), they’ve no genius answer to how they will, in future years, pay dividends to their shareholders to compensate them for their investment.

But the truth is, no one gets rich in the language-learning industy, except possibly EF, whose profitable business model involves parents paying oodles of cash to have their irritating teenagers spirited away for a couple of weeks each summer, ostensibly to improve their foreign language skills.

Websites are looking increasingly like a technology of the past. And if that’s the case, I’m stumped! For what would be the point of starting again with an app (there are millions, already)?

Or on a social network? Most of them are already swamped with the hopeful, or desperate, collectively churning out terabytes of nonsense.

But DL’s numbers show that language-learning appears to be in rude health, though we’re no longer hiding in our caves with nothing better to do.

Hopefully, then, that’ll come as good news for the language travel industry, and to the thousands of teachers and other staff that depend on it, both here in Italy, and in countries around the world.

Websites might be dying, even the biggest apps seem to be holes that fools pour their savings into, and social media, is well, you know…

But fingers crossed, once all this is over, there will still be language schools!

Don’t forget this year’s final, half-price ‘eBook of the Week’, Giallo a Capodanno, will you?

The level is B2/C1 (upper-intermediate/advanced), so it won’t be suitable for everyone, but until Tuesday night next week, it costs just £3.99, rather than the usual £7.99. 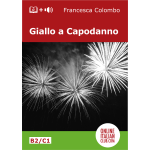 Check out the free sample chapter (.pdf) before you buy your copy. That way, you’ll have an idea of the level, length and format of the material, so know whether it’s your sort of thing, or not.

It’s New Year 1970 and Martina’s all dressed up for the party, determined to enjoy it! Her roommate is more cynical and would rather read detective thrillers than pretend to have fun with just six fellow students. But who knows? Perhaps something interesting will happen?