My neighbour – I’ve probably mentioned him before, the bodybuilder, married to a lady fitness instructor, they live opposite and are always ready for a chat, especially during the lockdown – yep, that’s the one, you remember!

Anyway, over the weekend his elderly father came to visit, as you do on a Sunday: show your face so the grandkiddies don’t forget who you are while it’s not yet time to read the will, fuel up on pasta, dessert and grappa that you don’t have to prepare yourself, being a widower and all that. You get the idea, a typical Italian Sunday, assuming the weather’s not good enough to head down the autostrada to the coast.

And the elderly father brought his even more ancient mother (in Italian it’s normal to refer to an eldery woman as ‘anziana’), my neighbour’s granny, so his kids’ great grandmother, who must be getting on some in age, by now.

The old lady turned up with armfuls of what looked like branches ripped off a tree, from her garden I was told, each bearing several small orange fruit.

The bodybuilder, though, can’t abide his granny’s fruit, which was how some of the consignment ended up on my kitchen table (see picture). 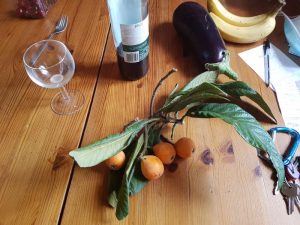 “What are those?” I asked my wife and kids as we sat over lunch. “Nespole”, they replied.

“Ah! Nespoli! Like in ‘I Malavoglia‘, Verga’s classic tale of Sicilian fisherfolk, the subject of last week’s new ‘easy’ Italian reader (the offer on which is now over, but it’s still worth a look) and the third in our ‘Italian Literature’ series.”

Well I probably didn’t say exactly that, as I don’t usually bother marketing to my wife and kids over a Sunday lunchtime carbonara (they never buy anything…)

But I probably did say, “Ah! Nespoli! Like in ‘I Malavoglia‘. They lived in ‘la casa del nespolo’, you know!”

My wife corrected me: “Nespole!”, which prompted me to query: “But, ‘la casa del nespolo’, so surely ‘nespoli’?”

This is clearly on the elementary school syllbus as my whole family were hundred percent certain that the trees are masculine (like ‘albero’) while the fruit is feminine (like ‘frutta’).

Well obviously, though I’d somehow managed to not know that for the twenty-three years I’d been learning Italian.

Back to the nespole – as you can see in the photo, they’re bright orange and the one I tasted was actually rather pleasant. I’m not really one for strange fruit (in any sense) but 160 pages of Verga had ‘incuriosito’ me to the point at which I was willing to give one a try.

So the flesh is soft, like an apricot, but without that dry, fibrous texture, more like a ripe plum, but less squishy. The taste wasn’t like an apricot, either. It was more acidic, but in a pleasant way – vaguely lemony, even.

Presumably ‘I Malavoglia’ would have eaten the fruit from their tree (before disaster struck…), but very likely theirs weren’t ‘vaguely lemony’ – I’m just guessing here (anyone who’s been to Sicily could fill me in, I’m sure) but Google tells me there are two types of ‘nespolo’, the ‘nespolo comune’ and the ‘nespolo del Giappone’. Looks like mine is the oriental one, and very likely the one in the story was the ‘common’ European version, the fruit of which don’t look so appealing, being more like stunted kiwis than apricots.

Talking of ‘I Malavoglia‘, and the ‘literature series‘, I’ve been wondering how come there’s so little mention of what people in the novels we’ve been reading ate.

Our first ‘Book Club’ was Eco’s ‘Il nome della rosa’, a late 20th century work and still in copyright, which is why we didn’t do an ebook version to sell. Eco, being a modern Italian, frequently mentions the meals his characters enjoyed, food and drink clearly being a thing for both him and for the monks in his story. I suppose that, apart from the illicit sex, there couldn’t have been much else to do in a fourteenth century monastry.

But the nineteenth-century writers of ‘Pinocchio’, ‘Uno, nessuno e centomila’ and now ‘I Malavoglia’ seem to basically ignore the topic. Wine comes up quite often in ‘I Malavoglia’, but mostly in references to the sinful local bar or to the possibility of work for the haulier and his donkey (romantic interest for one of the Malavoglia daughters) moving barrels from vineyard to pub.

The Malavoglia’s were fishermen, so presumably ate fish, and lots of them. But where are the descriptions of the meals the womenfolk prepared? Niente, not even a sardine on toast!

Yesterday I read Verga’s quite convincing ‘small boat caught in a storm at night’ scene (towards the middle of the actual book, though not present at all in our simplified version) and I found it frighteningly reminiscent of the time the same thing happened to me. Good writing! Albeit rather short on technical detail.

But did these people eat, wear clothes, have sex, even? Pinocchio might not have, but who would know from the way these guys wrote their books. Dickens, I recall from the brief period when I had the time to sample some classics of English literature, commonly described the meals his characters ate, or couldn’t afford to. So it can’t be the fact that this random handful of authors were men.

Beh, anyway, if you’d like to ‘approfondire’ any of the stories I’ve mentioned, visit our Literature page and browse. Or buy the easy Italian reader versions, none of which are currently on offer, though we have our Summer Sale coming up – in the second week of July.

By the way, after the ‘Summer Sale’, so from around the middle of July, we’ve scheduled a thirty-part series of texts (reading & listening) on the history of Rome, from its origins to the final collapse into ignominy nearly two thousand years later.

And with two more classics of Italian literature still to read, what a busy summer it’s going to be!

Saturday’s bulletin of ‘easy’ Italian news is here, and is free to read and listen to.

Plus there’s lots to study, organised into levels from beginner to advanced, and also free, on the club website.

To fund all that, we sell materials for learning languages, and online lessons with club teachers, from our online shop.