I had a sympathetic email from Nancy in Tasmania yesterday, responding to Wednesday’s moan, in particular about my ecommerce order not having been shipped on time (it’s now on its way, they wrote this morning!) But, she said, American ecommerce vendors have had such difficulty getting stuff to Australia recently, that they’ve stopped even trying!

There’s always someone worse off, it seems.

Yet yesterday, at our school I had a chat with club member Neil, who lives in Germany, I think he said, and is on his first post-pandemic Italian course, level B2, and having a good time.

So things aren’t messed up everywhere in the world, or at least, no longer.

I too will soon be getting on a plane, for the first time since 2019, to visit my daughter who’s studying at a Scottish university. Though we’re a little concerned about the case numbers in the UK…

Imagine having dodged the lurgy for nearly two years, then ending up isolated or hospitalized as a result of going on holiday! I’ve had hospitals up to here (gestures to throat)!

In Bologna, Italy, masks, distancing, and hand sterilization seem to be still ‘de riguer’, and new infections are low and, for now, stable. People are really behaving well, which I admit has suprised me, the locals normally having a fairly casual attitude to the law (“for guidance only”) and their responsibilities to wider society (“no one’s going to check…”)

Fingers crossed then, as it was around this time last year when, having taught five weeks of the 2020/21 English classes, we were told lessons had to be shifted online rather than ‘in presenza’, and had a frenetic weekend setting up Zoom accounts and learning how to use them. Which was how we proceeded for the remaining twenty-five weeks of the academic year…

Anyway, I thought it would be nice to ask club members (there are more than ten thousand of you) how everyone’s getting on, how things are where you are, and so on.

I was doing a lesson with some young teenagers (Italian ‘scuola media’) on Wednesday and a little lad suggested doing some vocabulary for body parts and illnesses, as he has to study ‘science’ IN ENGLISH at school (this is called CLIL – Content and Language Integrated Learning – and it’s currently very fashionable!)

So we did. And to practise, we were asking each other questions such as “Have you ever been in hospital?”, to which said small boy replied, matter of factly, that he had, last year, for Covid. The same hospital as I was in recently for my ‘ictus’, so we were able to swap notes!

And with an adult class that same evening – so people in their forties – one of the guys, a very pleasant father of two, was saying that he’d recently switched jobs to come to Bologna (he works on projects for refugees), but had previously worked in Padova, where things had been very bad – some of his colleagues had died, apparently.

So there you go – some of us have been lucky, worked from home, stayed safe and are now back to something akin to a normal existence, and even looking forward, tentatively, to traveling. While others are perhaps still locked down, or otherwise feeling isolated, and may have even been ill themselves, or have lost people close to them. Hopefully not.

Why not share how things are, and have been, where you are by COMMENTING on today’s article? It’s easy to do and, while your email is required, it won’t be published (in any case, I have it already, or you wouldn’t be reading this, so no need to be paranoid about privacy…)

Well, apart from the fact that getting loads of emails is a mass of extra work, and I’m already busy dealing with people who didn’t get their ebook download link (it’s in spam, or your crappy email provider filtered it out before it got to you, please get a decent email account), who can’t find the link to the online audio (open the damn .pdf ebook and you’ll find it – at the top of every chapter), or who can’t make the audio play (press the ‘accept cookies’ button), besides that, if you email, only I will read it.

Whereas if you COMMENT, others can read what you write and vice versa. Which is a lot more fun!

How to COMMENT? Click on this link to view the article online (or go directly to the club website and click on the title of this article, which until Monday you’ll find on the first page.)

Scroll down to the bottom of the article (not here in your email, but online) and you’ll see a ‘comments form’. Fill it with your thoughts and experiences, and press the button!

N.b. Comments are moderated to prevent spam, which means your contribution won’t be visible immediately. Anything genuine is approved, though if it’s night when you write something, it might not happen until I wake up in the morning.

Go here to comment. Write in Italian, or in English, as you prefer. I also read Swedish, French, Spanish and, with more difficulty, Turkish, if you feel like putting me to the test!

Now I’ll go write a comment myself, to get us started!

1.) Next week we’re having our usual November ‘Free Trial Lesson Offer’. The offer will be ‘first-come, first-served’/’new students only’, the number of free lessons will be limited, and I’ll be publishing full details of how you can do thirty minutes online with a native Italian speaker teacher at a cost of £0.00 on Monday 1st November. 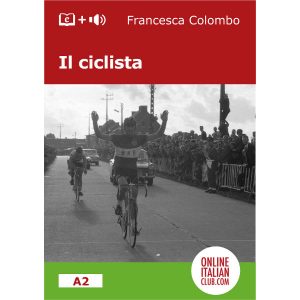 If you email for further details today or over the weekend, I won’t have anything to add! Spend your weekend, instead, with this week’s new A2-level, ‘easy reader’ ebook, Il ciclista, which is 25% off the usual price, so just £5.99 rather than our standard ‘easy reader’ price of £7.99, but only until Sunday night! Consider yourself reminded.