‘La diaspora italiana – Italiani in Scozia‘ is selling well (details below), so many thanks to everyone who has bought a copy.

Someone commented on Monday’s article:

It’s hard to believe anyone would leave Italy for Scotland, much less be willing to fight for territory in the Highlands!

Nah… not hard to believe at all for anyone who lives here. Scotland isn’t perfect but, apart from the food and the weather, it would win hands down in a knock out bout if matched against large parts of Italy.

Take off your tourist glasses for a moment and look around, while I rant.

Italy’s been populated for at least two thousand years, and ownership of the land and the assets that sit on it (housing, for example) naturally got concentrated over the centuries (for most of which time nothing resembling democracy existed). Until here we are now, one of the most unequal developed countries in the world!

The others, by the way, are two Anglo-Saxon/capitalist countries, the USA and the UK. Go figure, raw entrepreneurialism creates inequality, but so too does a thousand years of corporatism, that is to say, a system which prioritises protecting whatever privileges you can cling on to, at the expense of others.

For instance, there are virtually no ‘foreign’, foreign language ‘teachers’ in Italian schools. The English, French, Spanish and German teachers are virtually all Italians with jobs for life – so they cannot be sacked no matter how useless. Fortunately, they’re assisted by friendly, hard-working native speakers. They have to be friendly and hard-working because they’re on temporary contracts, rather than enjoying the rights and security guaranteed their protected Italian colleages.

And the average age of a state school teacher in Italy? Fifty plus. For decades, the young, the talented, the enthusiastic (not just us foreigners) have been frozen out of the system, so as to protect insiders.

Corporatism, trade unionism, or ‘red in tooth and claw capitalism’, either way, the systems work so the rich stay rich and the poor have little chance to climb the ladder, especially after decades of austerity.

Sure, there were brief periods when things seemed brighter – for example, the ‘sixties in the UK saw a mass expansion of university education, bringing opportunity for many working class kids to go to college and become professionals. It’s much harder now, apparently.

The Italian boom years brought tourist dollars and, in the post-war years, saw the founding of hundreds of thousands of small businesses.  Their owners got rich, for a generation or two, but their businesses are now mostly moribund. Drive around an industrial estate more or less anywhere in northern Italy and count the empty warehouses, the abandoned factories.

Starting a business in Italy then might have been a good way out of poverty. My wife’s uncles and aunts went from having no shoes on their feet to owning clothing brands and chic boutiques.

But now it’s expensive, bureaucratic, and frankly, not for the unwary! So not a great option for foolish outsiders, and definitely not for the young, who’d be better off taking their energy elsewhere, as many do.

Yesterday evening I was talking on Skype to a young Italian with bags of enthusiasm and talent, a college degree, work experience, and a masters in human resources, or some such.

After finishing his specialisation he would have had the chance to do unpaid internships in his home city, he told me, but instead chose to move to an eastern European country where he was hired by a multinational, on (the Italian dream) a permanent contract. And paid for his time!

Infrastructure in northern Italy – so the healthcare system, transport, education and so on – is approaching north-European quality, more or less. But things are apparently far behind in the south, where many Italians live, and emigrate from, either internally, or to places like Scotland (see below.)

Yes it’s pretty, yes the sun shines, but who’d want to live out their whole life denied the chance to make an honest living or start a family? To progress? To create something, maybe?

The birthrate in Italy is one of the lowest in Europe, by the way. Why? Well salaries have increased barely or not at all in the quarter of a century that I’ve been living here. Oh, and the school system is so poorly designed (younger childen might only go to school until lunchtime) it can be impossible for women with children to work. Job or family? Choose one.

The consequence? We have one of the highest percentage of pensioners in an increasingly-elderly western Europe. Pensions, education and healthcare are the three biggest items in the Italian national budget. Guess which two of those primarily benefit the old, who vote.

Were any business person foolish enough to choose to hire someone in Italy, she’d more or less be obliged to offer them a permanent contract, the details of which are negotiated nationally with unions, so making them inflexible and expensive to administer. Basically, you can’t just hire and fire people when you need them.

The result? People don’t get hired at all.

By the way, payroll administration is so complex here, it’s a profession! Accountants won’t touch it. Together, professional advisors (one won’t do) will cost a small business many thousands of euros a year, EVEN IF THEY DON’T TRADE, for example, during a pandemic. And then there are taxes, of course, lots and lots of them, many of which are due whether or not you make any money whatsover. Italy taxes businesses that make a loss… Really!

And talking of employees, for the entire period of the pandemic, we were forbidden from making anyone redundant. No really! I don’t know of any other country that imposed a blanket firing ban on the entire economy. Do you?

So that was twenty-one months in which the value accumulated over decades of hard work and sacrifice leaked steadily away in rent payments for unused premises, unavoidable admin costs, the inevitable huge bank charges (banks can’t fire people either…), and innumerable tax payments. As the state helped us out with cash with one hand, it took it right back with the other.

Talking of which, if an Italian teacher costs me €1300 a month gross (a pitiable sum, you’ll admit), the teacher might take home €1150 or so – compare that to the cost of your holiday lodgings, by the way – but the cost to the language school will be around 20% higher than the gross.

That’s because of the ‘contributi’ of around 27% of gross salary. It’s the cost of funding today’s pensioners and is paid 2/3 by the employer and 1/3 by the worker.

Yes, that’s correct. The working age population, at least, those that are lucky enough to ever find a job, are paying for armies of pensioners, people who may have retired on a ‘final salary’, state-provided pension at an age of, say, 55, and who are still going strong in their early eighties, thirty years later.

Bad news, though… That’s a disaster for a badly-designed, too-long unreformed, pension system which, for decades, took no account of increased longevity and a falling birthrate.

Never mind young Italians, with your salaries still at 1999 level, your now ‘contribution-based’ pension to not get too excited about at a minimum retirement age of 67, and with little hope of getting your own place and so being able to start a family until at least your mid-thirties, there’s still hope.

Do what your compatriots have been doing for 150 years – emigrate!

The homes and flats you would have occupied here will be lived in by immigrants from places even more mismanaged or resource-poor than Italy. My zone is filling up with families from the Indian sub-continent, good luck to them.

Or if you hail from one of Italy’s numerous attractive cities, towns or coastal destinations, perhaps the flats and villas that your grandparents’ generation might have lived in will be turned into B&Bs or rental appartments, and priced for the wallets of citizens from luckier countries looking to taste ‘la dolce vita’ (a phrase I’d always assumed was meant ironically…) 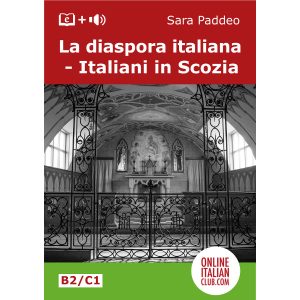 A ‘diaspora’ is a population that lives somewhere different from their original home, or that of their forebears. Since the late nineteenth century, millions of Italians have emigrated in search of better prospects. By 1980 it was estimated that twenty-five million Italians had made their home outside of Italy, in countries all over the world…

From the Roman empire to the European Union, find out more about the Italians who made their homes in a land which couldn’t be more different from their own. A place of great natural beauty, though with a challenging climate and strange food, a destination that offered them the economic opportunities and stability not found at home, amongst a local population who were welcoming, if at first difficult to communicate with due to the sometimes incomprehensible local accent – Scotland!

I’ll be publishing three more of these between now and the summer, about Italians in Spain, then Australia, then the USA.

Someone wrote in mentioning Italians in Wales, of whom there are lots, apparently. Plenty in England, too, I replied, and across the various countries of South America, such as Argentina. Italians get everywhere (for the reasons explained above…)

But writers don’t grow on trees, even Italians, and I’ve yet to interest anyone in producing texts for other countries. If any club member knows an Italian teacher or native speaker that writes and who’d like to give it a go, do send them my way!

This being the first week, ‘La diaspora italiana – Italiani in Scozia‘ is 25% discounted, so just £5.99 rather than the usual ‘easy reader’ ebook price of £7.99.

Check out the FREE sample chapter (.pdf) before you buy a copy so you’ll know whether the level is suitable and that the format works on your device.

When your order is ‘completed’ (normally immediately after your payment is processed), a download link will be automatically emailed to you. It’s valid for 7 days and 3 download attempts so please save a copy of the .pdf ebook in a safe place. Other versions of the ebook (.mobi/Kindle-compatible, .epub) cannot be downloaded but will be emailed to people who request them.

Also, don’t forget to read/listen to Tuesday’s bulletin of ‘easy’ Italian news which, as always, is totally free (because it’s funded by donations…)