The ninety-two years from 192 CE to 284 CE seem to have been such a busy time in ancient Rome that even our Italian teacher, writer, and history buff, Francesca Colombo, seems to have got fed up with the constantly changing emperors.

“Non abbiamo qui il tempo di analizzarli tutti”, she writes. Suffice it to say that, for a while, the Roman empire resembled ‘Game of Thrones’, but on steroids!

In today’s article there’s a manipulative grandmother (Cersei Lannister?), a boy-emperor who insisted that everyone worship the sun god, rather than Jupiter (just as on the TV, it didn’t end well), and an apparently endless series of generals, who seized or were given power but, having failed to balance the conflicting interests of the empire’s powerful factions, came to a sticky end soon after.

Oh, and not to forget the giant…

And for those of you who hate starting something a thousand years after everyone else, the previous twenty-three articles in this series can be found here:

On Monday we have the publication of our new advanced-level ebook ‘easy reader’ (the one about vestal virgins…), then on Wednesday we finally get to the Christians, who have hitherto featured in ‘La storia di Roma’ only as lion snacks.

The -50% offer on our half-price ‘Ebook of the Week’, L’imperatore e i giochi, ends on Sunday night. 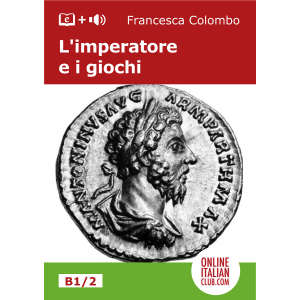 If you’ve been following ‘La storia di Roma‘, then you should like this ebook (and there’s a new one, also set in ancient Rome, coming out next week.)

Take a look at the FREE sample chapter (.pdf), at least. And don’t forget to check out the audio link, which is at the top of Chapter 1 (the audio for the ENTIRE EBOOK is available free online, no purchase necessary!)

Thursday’s FREE bulletin of ‘easy’ Italian news (text + audio) is ready for you to read/listen to, if you haven’t already done so: