I’ve always had trouble with the word ‘pescheria‘ (fishmonger’s), which seems to get mixed up in my head with ‘pesche‘ (peaches).

That said, ‘pescivendolo‘ (fishmonger) is a lovely word which, with it’s coherent sequence of vowels and memorable stress pattern, rolls delightfully around my mouth!

Yup, unlike that ‘pesche’, ‘pesci’, ‘pescheria’ mess, ‘pescivendolo’ is fun to say and hard to forget.

You heard it here first. But anyway, today’s Italian conversation, as you will have guessed by now, is set in a fishmonger’s.

Here’s the link, so you can get right on with improving your Italian listening: 30. Shopping, Pescheria.

And don’t forget: you can find all the dialogues we’ve already published in this series on our Italian Conversations homepage.

One of the Italian films I watched when I first came to Italy back in the ‘nineties (before I had kids, before I had a business to run) was ‘Nuovo Cinema Paradiso’, which had won an Oscar in 1989 for best foreign language film. 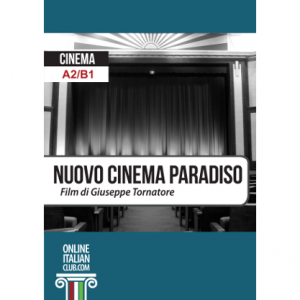 Wikipedia has a page on the film, as it does on more or less anything. It includes the nugget that in 2010 ‘Nuovo Cinema Paradiso’ was ranked #27 in Empire magazine’s “The 100 Best Films Of World Cinema”, make of that what you will (source: the Wikipedia English-language page.)

Anyway, as I had happy memories of watching this movie back in the day, it was one of the suggestions I put to Giovanni Galavotti, the online-Italian-teacher come movie scriptwriter who writes our ‘Book of the Film’ Italian easy reader series.

And finally… Giovanni’s re-telling of the story of the film, as simplified for learners of Italian, is now ready in e-book form!

You can find ‘Nuovo Cinema Paradiso‘ in our online shop, this first week only at 25% off the usual easy reader price.

So here’s the blurb from the back cover:

One of Italian cinema’s masterpieces, the Oscar-winning ‘Nuovo Cinema Paradiso’, directed by Giuseppe Tornatore, is retold here for learners of Italian by Giovanni Galavotti. Growing up without a father in post-WW2 Sicily isn’t easy, but Totò makes friends with Alfredo, projectionist at the town’s only cinema, and develops a passion for movies…

You’re going to love it! But just to make sure, download the FREE sample chapter (.pdf) first, so as to check the level is OK for you.

In the sample you’ll also find a link to the audio, all eight chapters of which are available online without restriction.

More on Wednesday. Have a good week!