A quick follow up to Wednesday’s article, “How do I learn Italian using your site?”

Andy P. emailed with some ideas that I think are worth sharing (my bolding of his text):

…the question of how do you learn a language is one I’d wish I’d asked myself 4 or 5 years ago. I think the response should be something on the lines of it depends what do you actually want to achieve. Looking back now I think I wasted or probably better put as not optimised my time learning grammar in particular the more esoteric tenses that I might use once a year if that. So questions to self for new learners…

1. Do I want to be a grammar purist if so then buy a text book and start reading but don’t expect to understand any Italian conversation. (That’s me in 2016/7}

2. Do I want to write like Levi or Pirandello? An interesting approach that a few of my fellow crusty students follow. They have a huge vocabulary. They gain a lot of satisfaction from reading and translating the texts of Primo Levi and the like.

3. Finally, if your aim is to be able to communicate with Italian people in their own language then the sooner you begin to listen the better. (Get a tutor if your budget stretches that far.) As you have said a zillion times there is sooo much material freely available. This year I have spent upwards of 30 mins per day listening to EIN and others and the difference it made when In Sicily was astonishing… probably the most enjoyable of our many Italian hols. To be able to earwig conversations between Italians going about their business was extremely satisfying, let alone having conversations that are actually understood.

And apologies to Andy for not having found the time either to reply to him, or to ask his permission to quote his email, though I’m sure he won’t mind. Feedback like this is too good not to share!

Personally, with my own language learning, I want to be able to understand what I read (mostly news articles) and what I hear (radio, TV, speech). And of course, to express myself.

As Andy says, speaking practice (i.e. conversation lessons or exchanges) and masses of listening practice are the keys to these two goals, and they complement each other. The more you understand of what you hear, the more you find you are able to reply. And lots of listening practice clues you in to the WAY that people express themselves in the language you’re learning, Swedish and Turkish in my case, and what they’re actually talking about.

Anyone who reads the British newspaper The Guardian may yesterday have seen an article about the verdict in a Swedish criminal trial – three police officers were accused of (wrongly) causing the death of a young autistic/Down’s Syndrome man who was unwisely wielding a plastic sub-machine gun toy in a public place and, due to his disabilities, failed to respond to their instructions to put it down. I remember reading about the incident when it happened a year back, and have followed events on the TV and radio news since then, all in Swedish. It IS immensely satisfying to be able to immerse yourself in what’s happening in the country where the language you’re learning is spoken.

There’s nothing WRONG with studying grammar or vocabulary in depth, except that it carries with it an ‘opportunity cost’ – the time and energy you employ ‘studying’ cannot be used for ‘practising’ speaking, listening and reading. Which limits how quickly you can progress with those skills, and resticts how much you learn about the users of the language you’re interested in and their lives.

Some grammar and some basic vocabulary are of course essential, but even at the start, why put off building speaking and listening skills?

And of course, if you have plenty of ‘graded’ material to practice with, there is, in fact, no reason. Other than perhaps not knowing any better.

Whatever you’re studying – the ‘presente’ say, or the ‘passato prossimo’ – look for opportunities to practice it, and not just to consolidate the grammar but to build the communication skills you’ll need in the future.

The club website has masses of materials that can help, if you take the time to discover it. There’s Listening and Conversation, as well as Grammar, Vocabulary and much more!

Start with material we’ve selected for your level, or use the alphabetical indexes in the header of the website and just study what you come across.

Mi raccomando, an app or a grammar book is just a starting point. If you’re to master a language that’s not your own, soon enough you’ll need to move on!

So thanks again for that, Andy!

OK, for those of you who already know the above, who’ve got your study approach sorted, and can cope with more advanced material (as well as for the culture vultures), today I have more extracts from Dante’s Inferno, this time Canto XXIX.

According to Dante, the residents of a certain Italian city are ‘even more vanitosi than the French!’

But which city would that be? Clearly not his own home town, Florence… Find out here.

That one, and previous articles in this series, can also easily be found on the club website’s Literature page. 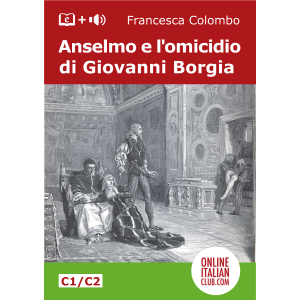 And finally, as they say on the TV news, Monday sees the publication of the first in an exciting new trilogy of ‘easy’ Italian readers, set in the days of the gruesome Borgias.

Meet Anselmo, an apothecary – one of the few educated men of his day – who, because of his unusual learning, is called upon by the powerful to resolve a mystery, the troubling question of who was behind the killing of the Pope’s son, Giovanni Borgia.

On his answer depends an important political alliance, not to mention the unity of THE most powerful family of the age.

So of course, it’s in just about everyone’s interest that Anselmo doesn’t find the truth…

In my next article there’ll be a link to the sample chapter, and to the audio for the entire story, available FREE online!

Plus a special launch promotion, for those who’d like to buy the complete text (and so support the club!)

And if you’d like to have them emailed to you (three times a week, every week), you can subscribe – absolutely free of charge – here.