We’re on holiday, in İstanbul.

Now I just tried to find out from Wikipedia if I’d got the little dot on the capital I correct (like this İ ?) and what the origins of the city’s name were, and why it should have a little dot when the normal rules of spelling would suggest otherwise.

Fascinating stuff, for those of us interested in languages.

This place was Constantinople until, what 1453 if I remember right?

It was the Byzantine capital for the later part of the Holy Roman Empire. But my history is hazy, to say the least.

So that’s something else that, normally, I would have checked on Wikipedia.

But this invaluable online encyclopedia, valued around the world by students, bloggers and anyone needing to learn or check something, is blocked in Turkey.

And China, to be fair. It’s not just Turkey.

But it’s only blocked completely in those two countries.

Russia only blocks four articles, apparently. Other countries, including the usual culprits but also Britain and France, have censored things too.

So what’s Turkey’s problem with Wikipedia?

Presumably they published something that the government thinks is inappropriate, then refused to take it down when asked politely?

Subversives! Terrorists! Or at least terrorist-sympathizers.

Google tells me that there’s an article on Wikipedia explaining what they’re supposed to have done wrong.

But of course, I can’t actually read it.

Or check that the link is good (which is Blogging 101). I just get a ‘this page can’t be reached’ message.

But here it is anyway: https://en.wikipedia.org/wiki/Block_of_Wikipedia_in_Turkey

So take one friendly blogger, who speaks the language more or less, loves the food, and is having a great holiday.

He’s in a positive mood, and is trying very hard to ignore the fact that parts of the famous Taksim Square are cordoned off, so as to allow squads of police and military to rest in the shade of their parked amoured vehicles.

You know, the ones with the special snow-plough-like attachments at the front, for breaking through barricades?

Those. Though actually you probably don’t know. Governments that have these usually keep them parked somewhere where they’re not such terrible P.R.

Unless they’re supposed to be a warning, maybe?

Anyway, so take one friendly blogger and stop him accessing basic information, as they do in, say, China.

What do you get?

One now irate and disappointed blogger who is no longer so interested in writing about this wonderful city and it’s lovely people.

I took some photos as the basis for the article I was going to write, and spent time formatting them. I suppose it would be a shame to waste them.

But my heart’s not in it, understand.

OK, here’s the first of my holiday snaps. 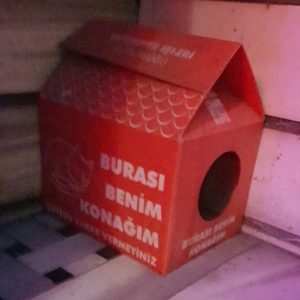 In other places I’ve been in the world that were as infested with felines as İstanbul is, people either ignored them or shooed them away.

Here no one seems to mind their presence. And as you see in the picture, some organisation actuallly seems to be making an effort to house them.

We were walking through the lovely, breezy Gezi park yesterday afternoon and passed a little hut for the use of the park guards.

One of them, sweating in his uniform, was seated in the hut, breaking bits off his evening ‘kebap’ (a grilled meat sandwich), and flicking them out of the open door – to feed a pair of furry bystanders.

Holiday photo 2, and this is actually quite an interesting image in itself. 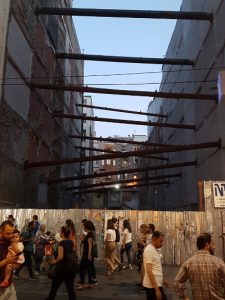 There are vacant lots everywhere here in the heart of the city. Also abandoned or semi-abandoned buildings. The cityscape is a mix of the new and the almost-falling-down.

Outside of the center, on the road in from the new Sabiha Gokcen International Airport, you have an enormous, like really huge, modern city.

The population is 15.07 million, according to Google, which isn’t banned. Suck ups.

The verges of the interstates/motorways that take you the fifty or so kilometres (sorry, can’t be more precise – no Wikipedia…) are neatly trimmed and planted with saplings.

Wow, this country has the prettiest major highways!

My first impressions of the city itself were impressive. I’ve driven into big cities before – London, Dallas, Rome, but this place is just HUGE, and mostly newly-built.

A literal forest of skyscrapers!

And then you get to the center with its peculiar mix of ancient and modern.

Oh, one interesting thing from wandering around the town?

I noticed this when I lived in Turkey many years ago, and it hasn’t changed: shops cluster together by type.

One street is all little places selling paints and powders, the next is natutical components and charts.

Walk up the hill a little and every business there specialises in some aspect of the music industry – instruments, microphones, cables, costumes, you name it.

This is the old city, mind you. The newly-built part, probably 80% of the total area (sorry, can’t check that for you…) is all shopping malls, like everywhere else in the world.

While we were exploring, we walked past an open doorway. Beyond the door was a courtyard with some embarrassed-looking men milling around a handful of women seated in the sun outside cubicles.

I recall (but can’t check in Wikipedia) that the state licences brothels, at least one per town. They’re sad places, though clearly more wholesome than encyclopedias. 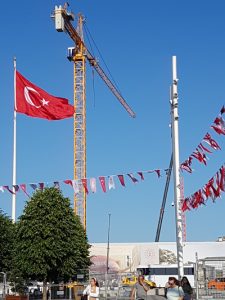 So I thought this one more or less sums it up.

The proud flag of a proud people, the blue sky, the bright sunshine, a cooling breeze.

We’re in Taksim Square again, which isn’t much to look at but teems with people.

A lot of them are visitors from the Middle East. There aren’t so many western tourists here, as there are other, more obvious destinations.

Look it up (I can’t) and you’ll find that there was trouble here a few years back. Hence the squads of police making their presence obvious.

The pole on the right bears lighting and surveillance systems. Now you know why.

And the crane in the background symbolises the astoundingly-rapid growth of this city.

Behind the camera there’s a huge new mosque going up.

Off to the right somewere, a major new cultural center (I head the President making a speech about it on the radio a few months back!)

Beh, that’s it for today. Hoped you like my holiday photos!

Monday, I’ll let you know how I’m getting on with the language.

I’m trying to squeeze in as many of the suggestions I make in Wednesday’s article as I can!