I have a pain in my left shoulder, guess why.

You got it – the famous third dose! Which I booked through a link in a text message I got on Tuesday, and received yesterday (Thursday) morning, in a purpose-built vaccine ‘hub’ created from a disused engineering factory on an industrial estate not far from Bologna airport.

I admit to having questioned which country I was living in. Since when did things get so, well, modern? So technological? Dare I say it, so efficient?

OK, I won’t say I miss it, or have shed any tears for the bureaucrats (they’re still out there, I’m sure, as government workers have jobs for life).

But there was something vaguely reassuring about the fact that you used to have to leap hurdles and shell out cash for ‘bolli’ before getting anything, whatsoever, done.

Ah, I forgot, sorry. You probably live in a country where efficiency and transparency aren’t fashionable new ideas.

‘Bolli’ are tax stamps, which you buy at your local ‘tabaccheria’, which are the only shops allowed to sell them, along with other regulated goods such as tobacco, scratch cards and, in the past, salt!

Tax stamps are how the state charges for small services in a way that minimises the risk of their employees pocketing the cash.

If you’re trying to get anything done in Italy, you’ll need some: look for a shop displaying a blue sign with a big, white ‘T’. Though these days we have ‘virtual’ bolli, which are automatically added to invoices, deducted from bank accounts (really!) and so on.

Money, money, money! We lucky residents of ‘il bel paese’ are poultry, there to be plucked (and yes, I’m aware of the possibilities for rhyming that.)

I recall, years back, when applying for our school to be ‘recognised’ (taxed even more, in return for very little) by the ‘regione’ (a bit like a US state, except they don’t get to execute anyone, or restrict abortions), one of the many, many stages in the process was to sign and submit a declaration that I had had no dealings with organised crime, on my mother’s life!

It occurred to me at the time that if I HAD had any dealings with organised crime, I’d probably have no great concern about signing a false declaration denying it. But no matter – it was just another signature, out of the hundreds required.

Until I finally reached the finish line of the months-long bureaucratic marathon, only to be informed that the document in which I attested that my soul was whiter than white was missing the necessary ‘bollo’ for, I don’t know how much, thirty-five euros, or something outrageous!

Couldn’t it be overlooked? Couldn’t I pay by credit card?

Well of COURSE not! I would have to go to a ‘tabaccheria’ to buy the damn bollo, which could only be paid for in cash, not card, which I happened not to have enough of with me.

So it was back on the motorbike to locate a bank with an ATM, then to comb the streets for a ‘tabaccheria’, then shell out the equivalent of a good bottle of malt whisky for a square centimeter of pink paper, and finally back to that utterly meritless temple of bureaucracy that is Bologna’s ‘Camera di Commerico’ (anyone running a business has to register it there, and pay huge annual fees).

By which time I was spitting in fury.

Those were the days, though!

None of this in-and-out-in-ten-minutes, health insurance card SCANNED into the computer, details politely checked, arm injected, and Green Pass updated to show my new status before I’d even got back to my motorbike to head home.

N.b. No vax club members are more than welcome to post crazed comments on this article (as are, for that matter, others who I may have intentionally offended this morning), and they will, of course, be published, as all genuine comments are. Click here and scroll down to do that. Comments will be moderated, so will likely not be published immediately.

Or you can just unsubscribe. There’s a link at the bottom of every article that’s emailed out.

Why bring politics into this? people enquire. Because, amici, the world IS political, everything about it, including health care.

I’m still boiling mad about having been Brexited, against my will, and am never hesitant about calling out nonsense.

So, given that it’s Friday, and I’m in the mood to indulge myself, you’d be well advised to comment, rather than emailing me your views directly.

Unless, that is, you’re feeling masochistic. 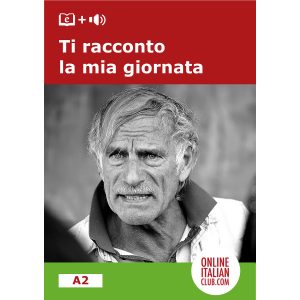 And here’s the usual Friday reminder about the week’s new ‘easy reader’ ebook, Ti racconto la mia giornata, which is discounted 25% for just a couple more days. Get it today or at the weekend and pay just £5.99. From Monday, it’ll be £7.99.

When your order is ‘completed’ (normally immediately after your payment is confirmed), a download link will be automatically emailed to you. It’s valid for 7 days and 3 download attempts so please save a copy of the .pdf ebook in a safe place. Other versions of the ebook (.mobi/Kindle-compatible, .epub) cannot be downloaded but will be emailed to people who request them.