I read somewhere, don’t remember when or where, and the details are now hazy, that in a certain sport – could’ve been baseball, could’ve been cricket – the batter, batsman, whatever the word is, has to try and hit a small, hard ball that…

…IS MOVING SO FAST THEY CAN’T EVEN SEE IT COMING!!!!

Who knows if that’s true, but it’s not hard to imagine that the ball, thrown by a specialist who’s trained for years and is determined to catch you out, will be traveling very fast indeed.

If batting were easy, everyone would be able to do it, I suppose.

And yet they can’t.

The top stars make it look easy most of the time, but even they don’t hit every ball.

Suppose then that you ARE a top batter, batsman, or batswoman, whatever.

Not Batman or Batwoman, that’s a different metaphor.

You’re heading out onto the pitch, your protective helmet and gloves on, bat under your arm.

You feel a little nervous but not too much.

You know, after all, that you’re at the very TOP of your game.

You’re one of the best in the world.

It’s likely that the pitcher/bowler – the person hurling the ball at you – will be trying as hard as they can to get one over on you.

Though they might be a little in awe of you at the same time – you’re a legend in this sport.

Balls start whizzing round your ears. Your opponent is nervous, so throwing inaccurately.

But you can sense them, most of the time at least.

And you’re relaxed, which is important.

You just have to wait for your chance, to hit one so hard that it travels right out of the stadium!

Be calm, you tell yourself.

Let him tire himself out.

Play the numbers – hit the easy ones, don’t risk the marginal ones, wait for a mistake you can exploit.

You feel in control, whereas he’s getting frustated, losing strength, becoming even less acurate.

And there it goes, way way out there where there’s no one to catch it.

The perfect strike, the one you were just waiting for. The crowd applauds.

Now that was worth waiting for!

And now the bowler/pitcher guy has messed up so badly, he’ll lose his cool even more.

So there’ll be other chances.

THAT’S why you’re at the top of the sport.

Not because you can hit the ball perfectly every single time.

Often you can’t even see it.

But then the other guy won’t have it on target most of the time, either.

The decades of practice helped, of course.

And your ambition to be the best has been fundamental.

An important step was learning how to control your fear.

And understanding the importance of patience.

And the need to wait for opportunities.

(Don’t have any idea what I’m on about? See the * at the end of this article.) 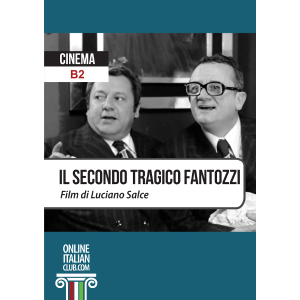 It’s a slapstick comedy, the retelling of a classic movie from the ‘seventies.

In the final chapter, thwarted in love, Fantozzi hurls himself off a cliff in a famous tourist location.

In the subsequent scene, his wife is shopping for dinner ingredients and spots her husband in the display of fish – he’s been caught in a net and sent to market.

“No, I’ll have the whole thing”, replies Fantozzi’s wife (she must have had a lot of cash on her…)

“Two nice slices?” I think it was “Due belle fette?” in our ebook.

That line’s been going around in my head ever since I read it, and is still making me smile.

Fantozzi has had other misadventures. Read/listen to the earlier ones in our other Fantozzi ebook: Fantozzi

And there are also other ‘ebook of the classic Italian movie’ titles.

Or check out the Catalog, which shows everything, organised by type and level.

Did you listen to Thursday’s easy Italian news?

Did you? Did you?

I can’t believe it!

We worked so hard on it!

And it’s costing me a fortune to produce…

It’s FREE to use.

And it really will improve your listening, I guarantee it.

And if you haven’t already explored the club site, which has a MASS of FREE MATERIALS for learning Italian, including lots of audio tracks, then you really, really, really should…

*My imperfect metaphor is supposed to make you think about the challenges of listening to spoken Italian. Often what you hear will come too fast for you. You may not even hear the individual words. Grasping the whole meaning can feel impossible at first. But it does get easier, especially if you practice a lot. You’ll never hit every ball that comes your way. Be calm, control your fear. In time, you’ll be world class!