As if I didn’t have enough to do in 2021, what with learning Spanish, improving my French, and maintaining Swedish and Turkish, recently I’ve taken up chess.

I blame my eldest daughter, who’s locked down at university and, scrabbling around for ways to fill the time, downloaded the most popular chess app to her phone and challenged me to an online game.

Which I won, easily. Bright as she is, she’s just starting out, whereas I’ve been playing the game, very badly, for forty-five years.

The app, once I had it on my phone, proved to be rather addictive. If I say it’s the chess version of Duolingo, a lot of you will know what I mean.

After a week, my free trial lesson was due to convert into a fully-paid annual membership costing me over a hundred euros, yet the app was proving such a diversion, I let that happen without protest, and haven’t yet started kicking myself over my profligacy.

What’s this got to do with language learning?

The rules of chess are uncomplicated, as are the rules of language, once you’re broadly familiar with them.

Playing the game at a basic level is straightforward, and if you’re playing someone of a similar level, fun. Much like using your Italian to chat to another foreigner you might, in pre-Covid days, have met on a plane, or in a pub.

But playing BETTER, playing WELL, it very soon becomes apparent, is going to involve much learning, and likely over an extended period.

For while the rules of the game are simple, boy there’s a lot to know!

Opening moves, for example. White (that’s me) plays first. I have a choice of 10 possible opening moves (two knights, eight pawns). Black can respond in ten ways. Is that already a hundred possible combinations, and we’ve only had one turn each?

I need a shortcut, so look up ‘chess openings’, hoping to find a piece of advice that will help me win more often and more easily.

But of course, there are dozens, maybe hundreds of possibilities, and each one is a rabbit hole down which I could tumble, even the simplest, most obvious options. I do this, she does that. Or she does that. Or this. Now what do I do? And what will she do?

OK then, there are no rapid, easy ways to improve my chances of winning (other than always playing against my children, who don’t appear to have the ‘chess gene’ either). So what next?

Next I look more closely at the app, to see what’s available, to see what other people seem to find useful. How do other people, the community of players who know much more than I do, improve?

The paid version of the app has lessons, with video and practice exercises. In the first few days, I did all the beginner ones, and so finally learnt all the stuff that my dad neglected to teach me back in 1974 (so that he could keep winning?)

Then I started on tactics, and finally realised why I always, always got beaten as a teenage chess player – it appears my friends’ fathers were better at the game than my old man was (a lot of them worked at the university), and so knew about stuff like ‘forks’, ‘skewers’ and ‘forcing’ moves, which they passed on to their offspring.

No matter. I’m learning now, at least! And to supplement the lessons, I tried the puzzles.

What’s white to move to win the game? Of course, it’s not one, obvious, move. What you have to figure out is a sequence that will lead inevitably to victory, but which might involve decisions that, at first, seem counter-intuitive.

Sacrifice my QUEEN, my BEST PIECE, for a pawn? Why on earth would I do that? Ah, I see, so this happens, and then that will happen, and then I can do this, and then I win! Cool.

Besides the puzzles, and the lessons, there’s the app’s main attraction: actually playing! And not just against my smartphone, either. There are, apparently, millions of people out there who are anxious to trash me at any hour of the day or night. In just seconds the app will set up a game for me with some whizz-kid teenager in Pakistan, a sulky Russian genius, or a pensioner in Norway.

Inexperience is a huge disadvantage, in chess as in life. So, at first, I got trashed in every game, and not just trashed, but rapidly and embarassingly trashed.

Turns out I was using the app’s ‘default’ 10-minute game setting, in which each player gets only ten minutes IN TOTAL to play the entire game. He (it’s mostly a ‘he’) thinks and moves rapidly, while I ponder, trying not to make a beginners’ mistake. Nine minutes later he wins, not because I played particularly badly, but because my ten minutes were up and he still had six. Game over. I lost. Again.

The thirty-minute setting works better for me, though now I have to train myself to move LESS rapidly, to think things through more (the puzzles and the lessons help), to be less impetuous, to see deeper into the situation, and above all, to make fewer ‘blunders’.

Yesterday, I lost all seven games, and worse, ended up ‘ranking’ fifty points lower than I had at breakfast. At midnight, I went to bed, thoroughly depressed, then couldn’t sleep, so turned on the app again and stared at a puzzle.

When I finally drifted off, I dreamed of bishops, wooshing around the board on their powerful diagonals. How come my bishops don’t do that? It’s the opening, gotta be!

So, after a week of effort, what have I learned?

That’s there’s so much TO learn, that I could be doing this for the rest of my life yet still be terrible at the game, and that there are always going to be masses of people better than me, who I will lose to, no matter how much I improve.

Perhaps that’s the point: not to play perfectly, not from the outset, perhaps never, but to learn from mistakes and, above all, to enjoy the process.

There is no end point, no destination.

There’s only the journey.

(And today’s another day! Maybe I’ll get better results if I play in the mornings, when I’m fresher?)

Don’t forget this week’s two ‘eBooks of the week’, will you? They both ‘difficult’, which turns out to be this week’s theme. 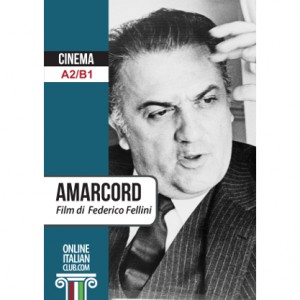 Directed by the brilliant Federico Fellini, ‘Amarcord’ is a masterpiece of Italian movie history. The title means “I remember” in dialect. The movie is Fellini’s heartfelt homage to his hometown, Rimini. Through the eyes of Titta – the young protagonist – we meet some of Rimini’s characters and live through a typical year in the town’s life in the early 1930s.

Italo Svevo’s self-published 1923 novel takes the form of memoirs written by his protagonist, Zeno, a sick young man who is undergoing the new therapy of psychoanalysis and writing down his thoughts – on the instructions of his doctor, who later betrays him – as part of that process.

Follow poor Zeno as he explores his addictive personality, acquires a wife and later a lover, grieves for his dead father, fails at business, and eventually, many years later comes to the realisation that…

And if these are too easy, or too hard?

Then go browse our Catalog page, where you’ll find over a hundred ebooks for learning Italian, listed by type and in level order.

Someone commented, asking if we could slow it down a little, which of course we could. Though I’d be constantly nagging my son (who does the audios, and has a teenager’s tendency to get distracted) not to revert to his natural speed.

But here’s the thing: would the audio being slower, ultimately help you develop your listening skills, to the point at which you could listen to an Italian TV or radio news broadcast and at least manage to get the gist?

In all likelihood, it would not. Modern language-learning materials tend to feature ‘natural’ audio, meaning that what you practice hearing is normal-ish speed and not devoid of complexity (accent, idiom, colloquialism, etc.) The earlier you get used to the challenges of real-life language, the better, or so the theory goes.

They say there’s no such thing as a silly question. Let’s assume that’s true.

But of course, that presupposes that questioners are willing to learn from the answers they receive.