Would you risk your life to win the hand of a beautiful Chinese princess?

I guess as a headstrong younger man I might have done.

I certainly did plenty of other reckless things, such as giving up a safe government job to travel the world, then eventually settling in Italy, for which I’m still kicking myself…

But these days, probably not. Pretty girls have lost their appeal, somewhat, and my head has grown used to being attached to my shoulders.

Hey, though, wouldn’t that make a great plot for an opera???

Bummer, someone got there before us (see below for this week’s new ‘easy reader’ ebook, Puccini’s Turandot, just £5.99!)

In the deader moments towards the end of last week, as I did with with our previous publication (Verdi’s Nabucco), I set aside several hours to pre-watch the opera, so I’d have something to write about today.

I don’t know whether it’s because Turandot was Puccini’s last opera (he died before finishing it), by which point in his career he’d figured out that the key to getting butts on seats was comprehensible lyrics, or whether Verdi, writing Nabucco decades earlier, was just old fashioned, or a bit of a bore.

But this one, I promise, is much easier to follow! And the plot line is somewhat more familiar, with a recognisable hero, a pretty girl, and no religion, thank you very much.

Read/listen to our ‘easy reader’ version first, and you’ll be well-equipped to tackle the actual opera, in the original, and understand at least some of it. Kudos to you, and to me, of course.

If you recall when I wrote about watching the Verdi opera, I found the full version online, it having at some point been streamed by my local opera house, here in Bologna. It wasn’t the best version, probably, but it was free.

This time, then, I was pleased to discover that the Teatro Comunale Bologna had also streamed their production of Turandot, and that it was still available gratis on Youtube.

And the bad news?

If you ever did psychedelic drugs, or even watched the film version of Pink Floyd’s The Wall, then it’s basically that: good music but very weird.

I admit, I was expecting something more classical, more, well… Chinese. Rather than dreamy images of headless would-be rapists and vengeful blow-up dolls.

But I watched the whole thing, all the way to the end, all more-than-two-hours of it, and ‘enjoyed’ it.

In the sense that it made sense, that the images stayed with me, and that, over the weekend I even had some of the tunes going around in my head (and not just the famous one, either!)

So the bad news?

Someone boobed, big time, with the streaming, with the Youtube upload, I don’t know, with something. Technically, and especially after the first break, this one’s a mess.

The streaming was/is sponsored by some local company. I assume their board was there on the night, in the best seats, probably.

I doubt, though, that any of them bothered to watch the uploaded version later, or they wouldn’t be so happy about having their logo plastered all over it.

The plastic tits and severed heads were fine, really!

But call me old-fashioned, I really would have liked the text on the screen (English above, Italian below) to actually match what was being sung.

Instead, for at least the whole second half of the production, we got fifteen or twenty seconds of song, THEN the text, by which point the artists were often on to the next part, and my head was spinning.

Vabbè, the board might reply – just a bit out of synch. Whadya want, it’s free, isn’t it?

Well yes, and I was just getting used to reading the lyrics of what had been sung before while trying to figure out what was being sung now, when things got even odder. And not in a good, psychedelic way.

Watching streamed opera, naturally you’re not going to get the complex camera angles, zooms, and so on that you’d expect with a film or TV production. Often it’s the camera on the stage, e basta. Perhaps a couple of cameras, and be grateful.

So it can be a challenge, at first, to know who’s actually singing. That guy in front on the left, or is it someone emerging from the shadows, there at the back? Fair enough, that’s all part of the fun.

But hey, what gives? I’m hearing the singing, but they all have their mouths clamped firmly shut (someone probably just had his head chopped off.)

Must be just me, opera newbie.

But no, now the song’s finished, yet the singer is still giving it his all, there center stage, chest heaving, mouth wide open!

So the lyrics don’t keep up with the singing, that I get. But the video images not keeping up with the audio? Sorry, but that’s just crap. Someone’s head should roll for this!

All that said, I’d watch the production again. I just wish they’d taken at least the minimum of care with synching the text and video to the audio.

N.b. The English lyrics (above) seem often to be a really awful translation of the Italian. Which is a good reason, Anne in Chicago, for actually learning Italian, rather than relying on whatever text shows up on the screen.

And so to option two.

I was rather reluctant to suggest you watch the Pink Floyd version, so went looking for something you might like better, though that wasn’t easy.

The best I could come up with was this one, which seems to have been ripped of from Italian public broadcaster RAI, and has a lot more views than the trippy Bologna version.

It’s much clearer, the singers are dressed Chinese-style, and there’s actually a gong on stage (bang it to signal that you’re ready to answer the riddles and hopefully marry the princess, see below).

This is exactly what I’d expect opera to be, and vitally, the lyrics (Italian only) appear to synch perfectly with what’s being sung AND what’s going on on stage.

All that said, everyone in the audience has white hair, no offence to present company intended.

And while this one seems technically perfect, it failed to capture my imagination – I prefered Bologna’s Rambo-style Prince Calaf, its zombie Emperor, and even the really-messed up princess.

So after twenty-two minutes, I quit.

I guess you’ll have to decide for yourself: 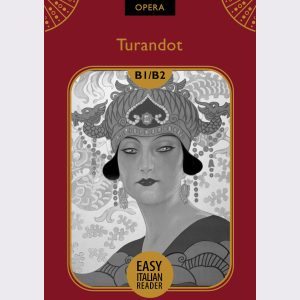 Giacomo Puccini’s famous opera, here simplifed for learners of Italian (with quotes from the actual libretto!)

First performed in Milan in 1926, only after Puccini’s death from cancer, the story is set in a mythical Peking, capital of China. The ferocious, but fantastically beautiful Chinese princess, Turandot, daugher of the aged emperor, is set on avenging an ancestor who was kidnapped by a foreign prince. With the reluctant agreement of her father, she sets a condition for her own marriage: any man who wishes to marry her must come to the palace and beat a gong, then answer three riddles. If he succeeds, he wins a bride, and an empire! But those who cannot answer her riddles correctly will have their heads chopped off, already the fate of many would-be suitors…

Begin with this ‘easy reader’ ebook before watching the actual opera, or simply use this original Italian reading/listening practice material to add a little variety to your study program.

And here’s the usual reminder to read/listen to Saturday’s FREE bulletin of ‘easy’ Italian news, which I’ve already done!