Hope you had a pleasant weekend!

But if not, at least that you, your family and friends, and the community you live in are corona virus-free.

Here in Bologna we’re keeping calm and carrying on. There are infections, and there have been deaths, but we’re not amongst the unfortunate zones in northern Italy that are starting their weeks with panic-inducing restrictions on non-essential movement.

In the most-affected areas, restaurants and pubs have to close at six p.m., so things must be serious. And the media tells us that Italians (they didn’t mention me and my fellow ‘extracomunitari’) are expected to abide by the rules. Which would be a first.

Reassuringly though, crisis or no, the day-to-day disorganisation, inefficiency and general selfishness that characterises life in Italy has not been completely lost: a trade union has proclaimed a national health-care workers strike for today. Emergency services will still be staffed, but if you have anything routine booked, then tough. Turn up at the appointed time, stand around in a crowd of frightend sick people wearing masks, then get sent home with the instruction to rebook the appointment for another day. Way to go, ragazzi!

Moving on, many thanks to club members who bought a copy of last week’s new ebook Dante, un’altra marachella. We appreciate your support, and hope you’ll enjoy the story. If you missed it, the -25% launch offer has now ended, but if you like cats and Venice, it’s worth £7.99 of your ‘learn Italian’ budget anyway.

Now then, yesterday, you’ll probably be well aware, was International Women’s Day. My daughter got flowers from her beau (“from the best shop in town!” her mother observed.) My wife didn’t. “Sorry dear”, I explained, “March 8th was just another gloomy day at the end of winter when I was a lad, and now I’m too old to learn new tricks.” You can imagine how well that went down. 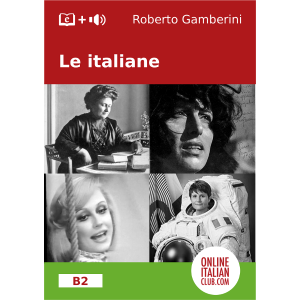 So this week, let’s do the half-price ebook offer on Le italiane.

Did you note that the definite article is female and plural? And that the noun agrees? Then you won’t have much trouble answering the question posed in the ebook’s cover blurb:

A cool-headed resistance fighter, an Oscar-winning actor, a doctor, a singer, an Olympian, an astronaut, a TV presenter, and a victim of the mafia.

What do they all have in common?

Read and listen to the moving stories of these eight determined Italians to find out!

Now it’s not often I’ll write that I, personally, really enjoyed a particular title in our ebook inventory. Most of them are good, or I wouldn’t publish and promote them.

To be honest, when this one landed, metaphorically, on my desk a couple of years back, I admit to not having had high hopes that it would be my sort of thing.

To my surprise, though, these short biographies of eight remarkable Italians held my attention easily. They were more than worth the time I spent reading and listening to them. So I’m pretty sure you’ll like them, too. (Read the genuine, unedited customer reviews).

Stock markets are crashing, the world faces recession again, people are dropping dead like flies (actually not, but you know… for effect), and the pubs are closed. Methinks a little inspiration, some examples of courage and dedication, would not go amiss this Monday morning.

Cancelled your trip to Italy this year? We don’t blame you. My next-door neighbour, Guido, has bought twenty-kilos of pasta, “just in case”, and ordered an electric generator (which hasn’t yet arrived…)

But just because dreams of Italy and ‘la dolce vita’ have had to be put on hold for now, there’s no reason not to keep working on your Italian.

For example, by listening to Saturday’s bulletin of ‘easy’ Italian news (fans of Daniel Craig and Lady Gaga will not be disappointed…)

That way you’ll be all set, with polished listening-comprehension skills and a comprehensive knowledge of terms for talking about current affairs, when you step off the plane or train in Rome, Milan or Bologna at some future moment (hopefully soon!)

The sun will be shining, the pubs will be open, and you’ll be very, very welcome.