Club members will recall that a few months ago you guys chose for me to study Swedish.

This was initially supposed to be a demo of how our easy readers and parallel texts could be used to learn a foreign language, even at a beginner level.

But frankly, I’d have preferred to study Spanish.

Why? Because it’s EASIER, and because we have way more material for learning Spanish in our online shop.

But hey, the people expressed their will, so for the first six weeks of 2017 I dutifully studied Swedish.

And then a week ago…

My study program hit the rocks!

For perfectly valid reasons (which now escape me), I failed to get out my Swedish course book last Tuesday evening.

And though I can’t remember why, I skipped the planned study session on Thursday, too.

Friday, Saturday and Sunday I always managed an hour or so in the evening.

But not last week.

It seems that, having missed one session, it became easier and easier to find excuses to miss the others, too.

My wife (who’s half-Swedish and so very into this project) suggested I treat myself to ‘a Spring break’ and plan to get back to my studies again the week after.

Nah, I thought, not going to happen!

Enough with the Swedish! Life’s too short.

And what’s the point?

I’m never going to use it. It’s just a proof-of-concept for the guys down at the club…

We’d surely sell more ebooks if I studied Spanish instead.

But there remained some doubt.

I was half-way to my target of finishing the first half of the book – approximately the end of A1 level.

Giving up would mean all that effort wasted (economists call this the ‘sunk cost fallacy’.)

And Stefi and the club members would be disappointed.

By giving up, I wouldn’t have proved anything.

And, I’ll admit, I’d rather enjoyed trying to figure out the baffling Swedish articles and plurals.

Poi, I sort of missed taking time away from work to do something for myself…

What to do if/when your study program hits the rocks?

Anything really, but certainly not nothing.

Exploit the power of habit!

Cigarette companies got rich off it.

So yesterday evening, a full week after the first missed session, after I’d washed the family’s dinner dishes and prepared everyone’s lunch boxes for Wednesday…

I got my book out again and sat down at the kitchen table!

I’ll just do a bit, I reassured myself. No marathon session to catch up for the lost week.

Just a page and see how it goes…

So, I’m back to studying again!

Honor and morale have been restored.

The boat is off the rocks, and bobbing merrily in the sunshine!

To be honest, sitting down at my books again was almost less effort than thinking of excuses not to.

Don’t forget the ‘Book of the Week’ offer on Un’indagine molto privata. 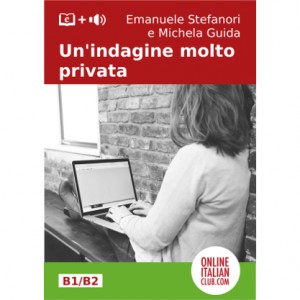 Gianna is about to turn 40 and has lately become dissatisfied with her life as a translator of crime fiction. Instead she fantasizes about becoming a private detective herself. So when her husband starts behaving suspiciously, Gianna decides to investigate… But can she measure up to her fictional investigator heroes?

Un’indagine molto privata is a B1-B2 level reader. There’s a Free Sample Chapter (.pdf), so you can get an idea if the material would be suitable for you.

The full version of Un’indagine molto privata costs just £3.99 this week, instead of the usual ebook easy reader price of £7.99.