Winter’s done, up here in the northen hemisphere at least.

We’re over two thirds of the way through the academic year, which is always a cheering thought for teachers.

And in the next fortnight we have a couple of holidays: Liberation Day on April 25th, then the first of May.

Or maybe I could do the seasonal ‘change of wardrobes’?

Though it’s warmed up a lot here in Bologna, it’s probably still early to pack away the insulating layers and break out the shorts and sandals.

And cleaning is a bore.

But hey, I could at least sort out my study plan.

Since when I don’t recall, but for most of the winter, anyway, I’ve been doing three Swedish lessons a week.

Monday and Wednesday with a much younger female teacher, then Friday with a guy of about my own age.

The grammar books have been gathering dust.

But now my Friday teacher’s had a change of family circumstances, meaning he can only do the first part of the week, for which I’ve already booked lessons with the other teacher.

So that’s rather spoilt my rhythm.

which doesn’t have the same groove to it.

I liked working with two different teachers, with their different styles and areas of interest.

And I don’t like going four days between lessons.

That’s too much time to forget, and to find excuses for not doing my homework.

Plus the easy Swedish listening, which has worked really, really well for several months, is becoming less challenging.

Guess I must have improved. It’s almost TOO easy.

Time for a change of plan, then.

I don’t know about you, but I find these moments, when I cease studying one way, and scrabble around for a new approach to fit new circumstances, rather unsettling.

The old is familiar and predictable. The new, uncertain and unproven.

Having a routine makes it so much easier to actually get on with studying, as the habit I’ve formed relieves me of the effort of making a decision to study or not to study.

It’s Tuesday, half-five in the afternoon, must listen to the news in easy Swedish before I get started on the kids’ dinner.

But routines can have a downside, too.

What about the other stuff that I could be doing, could be profiting from, but don’t try because I’m busy with my routine, or satisfied that I’ve already done enough?

I could, for instance be watching other programs on TV, besides the simplified news.

I’d intended to. But…

Or I could be making more use of those Swedish newspaper apps I installed on my smartphone, yet only look at when I have read absolutely everything else in the English language newspaper apps.

There are plenty of things I COULD be doing, many of which I would likely enjoy and learn from, once I got into the habit.

I could cling to the old plan, maybe look for another middle-aged Swedish guy who’s free on Friday mornings and likes talking politics.

Or I could go with a period of trial and error with the aim of identifying new things that would work for me.

Then use them to supplement the two lessons and the listenings that I already do each week.

Gotta be worth a try.

Talking of plans, it occurs to me as I write this that a study plan could be organised in different ways.

You could do it by day/time, for example.

I have a student who used to get up an hour early each and every day, to work on his English.

(He’s a legend in his company. Colleagues talk of his motivation and discipline in hushed tones.)

Or, you could do what I’ve been doing and organise your learning based on the type and availability of the learning material.

Three times, to maximse the benefit. And if I miss a day, I catch up the day after.

Or you could be sophisticated and follow a ‘syllabus’, designed by a teacher or other expert to get you from A to B, then on to C.

That’s how most books and online courses work.

They may not be perfect (and may indeed be missing something vital, such as speaking practice) but they make the whole process easier.

The material is there for you. All you have to do is study it.

With this approach, the course, or app, or book IS the plan.

Which approach to choose?

Try asking yourself what you’re learning a language FOR.

And as the months and years pass, keep asking yourself.

Your answer may well change, and so the approach you settle on will evolve to suit your requirements.

And perhaps one day, the time for a study plan will be over.

You’ll have (perhaps miraculously) reached the level in Italian that you were aiming for.

Do you keep doing the app, or re-reading the coursebook, again and again, ad infinitum?

Or if not that, then what?

Your career, relationships, how much beer you drink, what time your kids are allowed to stay up playing video games until.

Every now and again, perhaps with the changing of the seasons or the wardrobes, a rethink is helpful.

Not just about what and how you study, but why.

When you’re a beginner, just starting out, your goals may be obvious – just to be able to speak and understand in simple, transactional situations.

And as you progress, you might focus on reaching the next ‘level’, then the next.

But one day you’ll run out of levels.

Time for a change of plan.

If you’re wondering why I write about learning Swedish on what is clearly a ‘learn Italian’ website, well, that’s because:

I confess, I haven’t studied Italian for decades, I barely did even then.

So I’m very ignorant about the grammar.

And despite living here, I rarely or never watch TV or read a newspaper.

It’s shameful, I know, but I admit that it’s been years since I read an Italian book.

Though I read Italian at work (legal stuff, emails, etc.) most days. 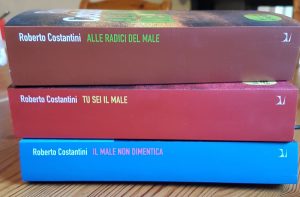 Guess I’ve been a bit lazy, then.

But one of the advantages of learning Swedish?

It makes reading in Italian seem SO EASY, at least by comparison!

So when, recently, my dad recommended a trilogy of thrillers he’d enjoyed (translated from Italian, set in Italy)…

I ordered all three, perhaps 1500 pages in total.

Over the weekend I made a start, reading and enjoying perhaps thirty or forty pages.

Reading is a fantastic, cost-effective way to learn a foreign language. Or to consolidate it, if like me you already have a good level.

Why not make it part of your plan, then?

And if you’re not yet ready for weighty trilogies, try easy readers.

(Burning with a desire to study? Start here.)