I was a revolting teenager, or a revolutionary one, depending on who you ask.

But those were the Thatcher years: mass unemployment, the miners’ strike, and so on. Some of my peers dreamed of being accountants, but my career goals involved facilitating the collapse of capitalism and helping with the construction of whatever, fairer system would succeed it.

As predicted by my uncle, himself a revolutionary youth in his university days (now a Brexiter), I grew out of it in a few years. Though not until my left-leaning career decisions had basically condemned me to sit out the next two decades of raging economic growth, while my mates from school got ever richer.

All’s well that ends well, I suppose. And my wife-to-be had a thing for hairy radicals, which was some compensation. Anyway, I was reminded of my teenage insurrectionary leanings while preparing our newest ‘easy Italian reader ebook’ for publication.

“Get the arms, Luigi, we’re going to town to fight for our rights as workers!”

Those where the days – there would soon be justice and equality, for all! Though in this case we’re in fourteenth-century Firenze, rather than late twentieth-century Britain.

‘Tumulto a Firenze‘ is set during the wool-workers’ revolt (they were known as ‘ciompi’ – Google it), and heady stuff it is, too. Crowds of oppressed workers invade the city; after the inital confusion the authorities begin to crack down; ringleaders are arrested and made an example of. There’s even a romantic subplot – what more could you want?

N.b. This one is rather advanced – we’ve rated it at C1/C2 – and for that reason the glossaries are Italian-Italian, not Italian-English as in the lower-level ebooks.

As always, there’s a free sample chapter (.pdf) to look at, so you can decide if this new material is for you. And also as always, this first week, ‘Tumulto a Firenze’ is 25% off the usual easy reader ebook price, so just £5.99.

NEW THIS WEEK, TOO, is the ebook version of our recently-concluded summer series of free articles with audio, ‘La storia di Roma‘. Though why would you pay for something that is anyway free on the club website? 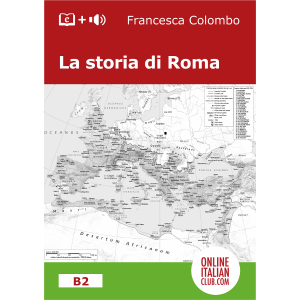 Well, perhaps you’d like the Kindle or .epub version, which you can read offline on your ebook reader?

Or maybe you like to print things to study, in the old-fashioned way? In which case, accessing each of the thirty articles on the website and formatting them yourself so they print nicely is of course an option.

Check out the free sample chapters (.pdf), plural because, with thirty chapters rather than the usual eight, we want you to see just how much is in this ebook!

What it doesn’t have, however, is the usual end-of-each-chapter exercises to check your understanding. And there are no glossaries in this one, either.

Why not? Because the ebook is already over ninety A4 pages in length. Adding glossaries and exercises would double that, and be expensive. And the point of publishing the series of articles as an ebook is to cover some of the cost of writing and producing it, rather than add to them.

Così. Here are those links again:

Too hard for you?

Both ebooks are difficult, it’s true. But there’s a lot aimed at beginner and lower-level students of Italian in our online shop.

The easiest way to find something that might be just perfect for you is to browse our Catalog, which has links to each title and to the respective free sample chapters.

Saturday’s bulletin of ‘easy’ Italian news has an interesting explanation regarding the referendum.

What referendum? Italians are voting (yesterday and today) on whether to reduce the number of deputies and senators in their parliament. I think they should, though don’t have a vote as I’m not a citizeen. My daughter thinks they shouldn’t, and does, as she is. Watch this space to see how the family feud plays out.

There’s also a piece on Garibaldi, who was a biscuit when I was a lad, but I now learn was one of the most important figures in the Italian ‘risorgimento’ (if you don’t know what that is, look out for our summer series, in 2022), a general, and a poet to boot!

Bet his poems were better than mine. He was certainly a more successful revolutionary!

And/or here to subscribe and so receive each thrice-weekly bulletin directly in your email inbox.