Over the weekend I was experimenting with an old bread machine.

Finally, the weather has turned, here in Bologna where I live.

So, on Saturday, my wife and I ‘changed our wardrobes’.

For those of you who live in climates where the difference between average winter temperatures and average summer temperatures isn’t so startling, that basically means packing away woolly jumpers and winter boots and replacing them with the shorts, sandals and swimming costumes that have been in storage since October.

It’s a job I always enjoy, if for no other reason than that it brings with it the promise of four months of sunshine and bare legs.

But anyway, in the process of opening chests and vacuum-packed plastic bags, my wife came across a breadmaker which she’d been given years back, had used briefly, and had then put away, along with a pile of good intentions, to gather dust.

Last week I’d been telling her about an article I’d read in ‘Le Monde’ (in French!) about how a lot of people get way too much of their diet in the form of ‘ultra-processed’ foods, which are linked to poor health outcomes.

She was sceptical that we, blessed Italians, would have any such issues with food.

“For example that ‘plastic’ bread you give the kids for breakfast”, I told her smugly.

Do you KNOW what’s in it?

Little of what we associate with ‘real’ bread, and loads of stuff that you wouldn’t recognise as ‘food’ if you saw them unloading it at the ‘bakery’.

Clearly I was convincing.

As soon as she set eyes on the dusty bread machine, she had the idea that I should use it each day to make nutritious loaves from which she could then hack off lumps (Italians don’t really have the idea of slicing bread) to then toast and butter, and so send our two scholars off to their various places of learning with something sustaining inside them.

“FULL of chemicals! That’s why they keep forever!”

Each day the kids take some chocolate-covered, plastic-wrapped unnatural concoction that LOOKS LIKE a little cake or snack bar with them in their school bags.

“If they’d had ‘proper’ bread for breakfast, they wouldn’t need to eat so many ‘ultra-processed’ snacks, would they?” she argued.

Hoist by my own petard!

Hence Sunday found me scraping ten years’ worth of dust off the machine and Googling pages on how to use a bread machine if you don’t have the manual.

(There’s a fantastic resource here, if you have a similar problem.)

First I tried a ‘bread mix’ from the local supermarket, which came out OK despite me not having understood the various buttons on the machine.

But it was obvious from the list of ingredients on the ‘bread mix’ packet that, despite looking and smelling fairly natural, this was not much better than a home-made version of the plastic monstrosity the kids had been scoffing happily until now.

So I washed out the bread-pan again, scraped the goo off the little mixing lever and set the machine to go once more, this time with ingredients from my own kitchen.

I used flour from at least four ‘almost finished’ packets of different types, sugar, salt, olive oil and half a lump of the fresh yeast I buy to make pizza dough with.

Using a bread machine, by the way, is MASSIVELY LESS EFFORT than making bread by hand, which was why I managed two attempts in a single Sunday.

Starting from my own ingredients meant I had to figure out in which order to put them in the machine, and which of the twelve (!) bread-making programs to choose.

But again the instructions at hillbillyhousewife.com were both informative and reassuring.

Slosh it in, basically, then press the button. And don’t worry, you won’t break the machine.

This time, though, the results were quite alarming!

Over the three hours or so, from initial rising, though mixing, rising again, and then the actual baking, a dough formed, rose rapidly, plastered itself over the little window in the lid of the breadmaker, then sank again.

“If it goes down any more, it’ll be coming out of the bottom of the machine” I complained to my wife.

When the ‘time remaining’ indicator reached zero and the machine started to beep at me, the resulting loaf was an unhealthy-looking white color, though some of the bits stuck to the inside of the machine had toasted rather nicely.

So, after a days’ work, I had one professional-looking wholemeal loaf, and one sunken white one, which looked as if it had just survived a Bologna winter (rather like me in my newly-discovered shorts…)

Lacking the time or energy to cook a proper Sunday evening meal, I set out plates with a slice from each loaf for everyone to sample, along with a pat of butter and whatever cheeses and bits and pieces I could find in the fridge.

And lo, the kids liked my catastrophic white one best!

This morning someone wrote to thank me for an ebook, and mentioned that her progress with Italian was slow because she was ‘old’.

Personally I think age has nothing to do with language-learning success or failure. If anything, the elderly learn better, as they’re more motivated and have more time.

So I wrote back that she just needed to keep at it and that “the magic ingredient with language-learning is time”.

So also with bread.

Yeast speeds things up, but you can make bread (sourdough-style) without it.

You always need time, though.

In my slapdash style of cooking (and language-learning), things may not always come out the way they are supposed to.

But put the ingredients in the machine, press the button, and have a little patience.

For if you never TRY making bread, you won’t know, will you?

And you’ll never have a home-baked loaf, ugly or otherwise, for your family to sample.

Similarly, if you don’t TRY learning Italian, you’ll never be in the position to look back a couple of years and marvel at the progress you’ve made since then.

I was a beginner.

People do this too infrequently.

I mean that, as language-learners, we’re always looking ahead, depressed at all the things we can’t yet do.

We compare what we can manage in our native tongues with the much humbler abililties we have in our second or third languages.

Yes, I’d LIKE my own-recipe loaf to have looked prettier, but it tasted OK, there’s loads left, and it cost just cents.

If I hadn’t given it a go, there would have been no loaf at all, and the machine would still be gathering dust.

And having done it once, I know a lot more about the process and can, perhaps, make better decisions next time.

Next time I’ll do better.

The magic ingredient is time. 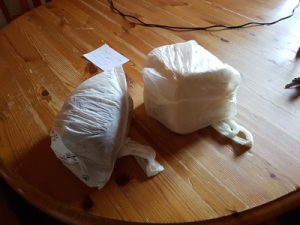