Things are quieter than normal in Bologna right now. “Too quiet!” as they used to say in the cowboy movies I watched with my dad in the ‘seventies.

Which brings to mind my favorite song from 1965, when I was minus two: Bob Dylan’s ‘Talkin’ World War III Blues‘.

In particular verse 4, when Bob ventures outside after the nuclear attack:

Well, I got up and walked around
And up and down the lonesome town
I stood a-wondering which way to go
I lit a cigarette on a parking meter and walked on down the road
It was a normal day

Down at the corner by a hot-dog stand
I seen a man
I said, “Howdy friend, I guess there’s just us two”
He screamed a bit and away he flew
Thought I was a Communist

Actually, unlike in the apocalyptic song, there are people around in our city, though fewer than usual and the phone doesn’t ring as often. That said, it’s been easy to get chatting – everyone wants to talk about the virus, even if only to moan that they’re fed up of hearing about it. There’s a certain ‘blitz spirit’ (UK readers will know what that is…)

Beh, listen to the whole talkin’ blues on Youtube, if only to reassure yourself that, if the world didn’t end in 1965, it’ll probably scrape by this year, too.

The lyrics are on the official Bob Dylan website – they’re a treat!

Every chemist/drugstore/supermarket in Bologna has a sign in the window stating unequivocally that there are NO FACEMASKS OR DISINFECTANTS OF ANY KIND in stock, so if you’re planning to visit our city, pack your own. Or just chill, whatever.

In any case, you won’t catch anything from our ebooks, I promise. And better still, this week’s ‘eBook of the Week’, Michelangelo e il Mosè, is half-price until Sunday night! Sterile AND cheap, what more could you want? 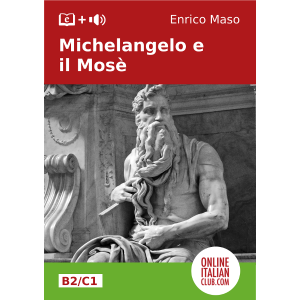 E poi, if you must read scare stories about the corona virus, at least do it in ‘easy’ Italian!
Actually, Thursday’s edition of EasyItalianNews.com doesn’t cover the topic (I think our editor was staging a protest…) but will keep you occupied in your bunker for an hour or so anyway. And it’s totally free!