Thanks to club-member Zsuzsanna, who sent me a link to this reasonably interesting article about language-learning. The article is a comment piece about a ‘scientific’ paper, published in the journal ‘Cognition’, the abstract for which you can find here.

I haven’t read the full journal article, because to do so would require payment and I’m unwilling to part with hard-earned cash for such nonsense, but the guy that wrote the interesting article about the paper clearly has, and goes into some depth.

The part that riled me up from the extract is below (the bolding is mine):

Children learn language more easily than adults, though when and why this ability declines have been obscure for both empirical reasons (underpowered studies) and conceptual reasons (measuring the ultimate attainment of learners who started at different ages cannot by itself reveal changes in underlying learning ability). We address both limitations with a dataset of unprecedented size (669,498 native and non-native English speakers) and a computational model that estimates the trajectory of underlying learning ability by disentangling current age, age at first exposure, and years of experience. This allows us to provide the first direct estimate of how grammar-learning ability changes with age, finding that it is preserved almost to the crux of adulthood (17.4 years old) and then declines steadily.

Background info. for you: there’s an idea that there exists a ‘critical period’ for language-learning and that this is to be found in early childhood.

Miss it, perhaps because you’ve been locked in a darkened and soundproofed room for the first few years of your life, and you won’t learn to speak like mom and pop. Though if it was them that closed you in the cellar, you might not have a lot to say to them anyway. So no bad.

Mostly this type of research was originally done on how children aquired their first language (so pyschology not applied linguistics), but parallels have been drawn for second-language learning. Such as in the paper above, which reveals (drum roll) that actually, the ability of children to magically learn the grammar of their native language continues until almost-adulthood.

Well, duh, OF COURSE it does!

Whoever heard of pre-schoolers using the ‘third conditional’, for example? Structures like “If I hadn’t dirtied my diaper, I wouldn’t have a soggy butt” come much later in life, and may often only be mastered, in my completely unscientific opinion, in the context of formal education.

The interesting article guy does a good job of looking at the study itself and, basically, drawing the opposite conclusion from the data on which it is based – that older learners, so non-almost-adults, can continue to learn languages effectively (huray!), or at least, that they would be able to if they weren’t distracted by trivia like having to earn a living.

But from my quick perusal of what is actually quite a long interesting article, what he doesn’t do is take the researchers to task for their OBSESSION WITH GRAMMAR.

“Children learn language more easily than adults“, says the abstract, but since when did language = grammar?

What about the vast, effectively infinite, set of words, expressions, idioms, colloquilisms, jargon and so on that a typical adult may need to call upon in order to use her native-tongue to full effect?

What about native-speaker-like pronunciation? And that ability we adults have (but children lack) to ‘decode’ the speech of others so as to read from their vowels or cadences their geographical origin, social class, or whatever ‘meta’ information their speech contains that is not conveyed by the words or grammar?

What about the ‘skills’ of reading, of writing, of listening, and even of expressing yourself clearly in speech?

Italian state schools (in which I have close to zero faith) use oral testing as the primary way of evaluating children’s progress. Grouchy adults regularly ‘interrogate’ their classes of stressed or terrified juveniles and award an entirely subjective and so impossible-to-challenge ‘voto’ (grade) to each child, which goes towards their final result for the year. And kids who fail a year in Italy risk having to repeat it. Which is dandy if you’re an adolescent male looking to meet pretty girls a year or two younger than yourself, but otherwise not proven to be an effective motivator.

Oral testing is hugely less efficient in terms of classroom time than quizzes or essays (everyone except the person currently being tormented is wasting the school day away on their smartphones.) But it’s much easier for the teacher, as it takes up time which would otherwise have to be spent actually teaching and, as a bonus, avoids the necessity of taking work home to grade or correct over the weekend.

The justification, though, is that ‘interrogations TEACH KIDS TO EXPRESS THEMSELVES, which they presumably would otherwise be unable to do, even in their own native tongue, despite their youthful superpower of learning grammar quicker than grandma can.

Sorry, but it’s all nonsense.

I teach kids of all ages, from pre-schoolers to the final years of high school, and it’s not apparent, I assure you, that ‘Children learn language more easily than adults’. The opposite, in fact.

I have mostly taught adults, and I learn languages myself, despite being more than three decades past the age at which the paper’s authors claim ‘grammar-learning ability’ ‘declines steadily’.

So I can confidently assert, ladies and gentlemen, that it is 100% NOT TRUE that, given equal exposure to language-learning opportunities (so for example, a measured number of hours of contact each week), kids of any age would make faster progress than adults. I’d bet on the opposite being the case.

Guys! You were measuring the wrong thing (‘grammar’ does not equal ‘language’). But in any case, if you want to understand adults’ abilities at second langauge-learning, why focus on children and they way they learn their mother tongues?

Perhaps you’re missing some other cruical factor besides age. Like, um, MOTIVATION (adults have it, kids tend not to), TIME AVAILABLE (the opposite), or EXPERIENCE (learning a first foreign language is hard, subsequent languages are easier)? Perhaps, if you looked, you’d discover something that would consign the whole ‘critical period’ concept to the trash can?

Grades in Italian schools go from 1 to 10, did you know? Not A, B, C, D, E, like when I was a lad. But as with everything in Italy, you have to know the unwritten rules that actually govern people’s behaviour.

For example, the law says you mustn’t drink alcohol and drive, though everyone knows that a couple of glasses of wine with your Sunday lunch is going to be just fine. Ditto, that you should not, in any circumstances, pass a red stop light! Unless, of course, you’re pretty much sure there’s nothing coming the other way, and there are obviously no cops around.

So, “nobody gets 10, dad” means that the achievable maximum in an ‘interrogazione’ is 9, or more likely 8. Which in turn means that 7 is good, and 6 is acceptable (‘soddisfacente’), though what that actually means is bad, just scraping by.

So the actual scoring system for oral and written tests in Italian schools, as applied by most teachers, is a five point scale from 5 to 9, with one common failing grade and four gradations of passing, from ‘just about OK’ to ‘wish I had a class composed entirely of angels like you’.

Not to be mean then (unwritten rules need to be followed, otherwise one seems like a foreigner), I’ll award the abstract a 5.

And admonish club members to believe precisely the opposite of its conclusions – that older is wiser, as any fool can see. 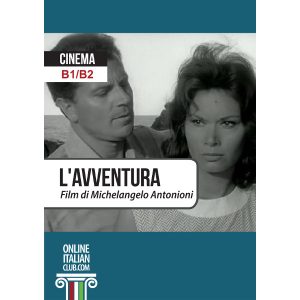 Don’t forget this week’s new ‘book of the classic movie’ ‘easy reader’ ebook, which is on offer until Sunday night at just £5.99!

A group of friends – including Anna, her best friend Claudia, and Anna’s well-off architect boyfriend, Sandro – are holidaying on a luxury yacht. While they are moored at a tiny, uninhabited island, one of the party mysteriously disappears. A search is begun, but the weather begins to worsen…

If you’d like to find out what happens next, the details (including the link to the free sample chapter) are below.

Here are the links if you want to buy a copy, or just look at the free sample chapter:

N.B. We have various payment options in our online shop, one of which is Paypal, which used to be our only payment system but is now supplemented by Amazon Pay (currently working 100% of the time, so useful if you have an Amazon account) and ‘Credit card/Stripe’ (which also works fine.) The Paypal route, on the other hand, appears NOT to work much of the time – we think it’s their new, EU-imposed, security protocols which are confusing people, though it’s hard to be sure. If you’re a Paypal fan, then persist. But if not, do try one of the other payment options, which work much better, for now at least!

Tuesday’s free bulletin of ‘easy’ Italian news is here. Go read/listen to it. It’ll do you good!