Monday morning, 07.55, and I have a relatively quiet week ahead, so plenty of time for language-learning.

But also, an article to write for the Club, and no-predetermined topic.

A week of study to plan, an article to write…

You have a goal (leaving your lover / learning Italian) but don’t know how to achieve it?

TURKISH
– conversation practice on Friday morning
– listen to the radio sometimes while doing chores
– occasional glances at news apps, without understanding much

SPANISH
– just starting out with Duolingo

The weekly time commitment comes to about five or six hours, plus the reading and listening done in odd moments or while doing chores.

But that’s not even a day.

And there are seven of them in a week, each having approximately sixteen waking hours…

Or to put it another way, the average is less than an hour a day.

Which is only about 7% of my total time.

Double that to take account of the unstructured activities (listeng to the radio, reading news apps) and we have a much more respectable 15%.

But still nowhere near full-time study.

Imagine a university student putting in just an hour a day. They probably wouldn’t get far, would they?

So given that my current workload is modest, to say the least, I could clearly be making better use of this slack period to further my longer-term goals.

What’s missing, then, from the above list of habitual study activities?

– I have a B1/B2 course book and exercise book sitting on the shelf at work, busy being ignored. Which is a shame, since they were expensive and would be useful, were I able to bring myself to open them…

– I downloaded the B1 Swedex exam ‘sample papers’ and planned to look at them, which I haven’t, with a view to evaluating what I needed to do to reach the next level. The idea was to take the B1 exam this summer. However, I’m having difficulty locating an exam centre in Italy (which is why I didn’t make a start with the books – a good excuse!)

In fact I’ve done absolutely none in the last three decades.

Which is probably why I find reading the language impossible. Would taking a course help? Probably.

– DL is fun and free, so I’ll aim to keep using it until I’ve at least covered the basics.

OK, so where does that leave me?

I could add in a session or two a week with my Swedish book, that’s a no-brainer, and not hard to fit in when things are slow.

And looking at the exam samples would help me benchmark my progress and decide what to prioritise. It might even be fun.

Assuming I won’t be able to take the B1 exam in Italy in June (which would have been a powerful motivator), I could at least PRETEND that I was going to, and prepare myself in any case.

Then, at a certain future date, preparations completed, I could use the CEFR checklist to self-certify my Swedish as B1. And move ahead with B2 material in the next school year.

As regards Turkish, the electro-shock option of a formal course in a classroom might be just the thing!

But that would have a cost, and mean time away from home, which is difficult as I still teach several classes each week. So, something for the future?

That said, we’ll be in Istanbul in June for a short holiday – so one possibility is that I start now with some market research – what schools exist, what courses they offer, how much they cost – and perhaps identify some options. Then, when I’m in town in June, I could drop by and have a chat, to see if studying in one of them felt like a viable way to move ahead…

And for the new language, Spanish?

Past experience (with Swedish) showed the Duolingo is a good way to get to first base, so to speak.

But also that speaking, and work with longer reading and listening texts, needs to be introduced earlier rather than later, which the app doesn’t.

So I could give myself what, maybe a month, to cover the basics on the app?

Then plan to get on to our teaching manager, Lucia, (not literally) to see if she has a friendly Spanish teacher who could help with practice, and with ideas on how to proceed.

There! Paul Simon was right, then.

Now I have three or four ideas to work on, this week, and the months ahead, seem much less empty!

P.S. Half-Price ‘eBook of the Week’

It’s been a while since we’ve done one of these, hasn’t it? 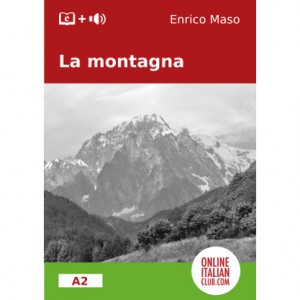 Three friends decide to spend a weekend trekking in the mountains, as they used to do when they were younger…

‘La montagna‘ is an A2-level .pdf ebook, which means you get a simplified text plus access to online audio.

Of course, there’s a free sample chapter (.pdf), so you can get an idea of the level and format.

And a few kind people have left reviews, which you can read here.

What if your level is higher, or lower, than A2?

Then check out our Catalogue, which lists everything by type (easy readers, parallel texts, grammar workbooks, etc.) and in level order.

P.P.S. “Where are the free materials you promised?”

There are masses of FREE materials for learning Italian on the club website available for anyone to use.

Thousands of people from around the world do so each day.

We also have a FREE beginners’ course, which is much more limited in scope but still has fifty or so pages of useful bits and pieces: http://dontspeakitalian.com/

And last, but far from least, our team produces three FREE bulletins of ‘easy’ Italian news (text plus audio) over at https://easyitaliannews.com/.

All of which is paid for out of revenues from ebooks and so on.