As mentioned in previous articles, I’ve been working hard with an app on my smartphone to improve my chess.

This involves doing lessons, practising with puzzles, and playing games online against people all over the world.

Though lately I’ve been losing games online to people all over the world!

For a month or so, everything went smoothly: my efforts to learn and improve paid off. My ranking eased gradually up, I played against stronger players, felt more in control of my game, and saw the stats impove. They showed more games won, while fewer were lost or drawn.

That was all very pleasing.

Just when I was getting into the swing of things, really feeling good about what I’d achieved, I started losing.

The app shows my recent progress as a string of red blobs, broken by the occasional grey blob when I’ve managed to force a draw, and not even a single one of those friendly-looking green blobs that signify a victory.

Worse than losing repeatedly has been the fact that as my rating has fallen, the algorithm has matched me up against progressively weaker players (which is totally logical.)

So there’s me thinking, oh goody, this guy’s ONLY rated at such and such a number, so weaker than me, or not significantly better at least, so I’m in with a chance!

Yet no. I lose anyway.

In desperation, over the dinner table last night, I asked my teenage son, who is a keen online gamer himself (though not of chess), what his take on his father’s earth-bound plummet might be.

“Is it a ‘ranked game’?” he wanted to know. I explained that all the games against real people were ‘ranked’.

“Well then, you’re going to lose a lot of the time”, he reassured me, “That’s how it works. There are always millions of people better than you.”

In fact, he went on to explain, some gamers create a second or third gaming profile, so starting once more at beginner/entry level, just to have the temporary thrill of thrashing someone much weaker than themselves!

“Perhaps that’s what’s happening to you”, he suggested kindly.

My wife also had a thought: “Maybe it’s like language-learning?” she suggested, “You make progress and then suddenly it starts to feel as if you’re going backwards!”

“This isn’t just a feeling”, I pointed out, “There’s ample evidence to show how much worse I’m doing!”

Tom told us that sometimes, when things are going badly for him, he’ll take a break for a day or two. And that when he resumes playing again, often he’ll do better.

“That’s true!” my wife agreed. And, in fact, I remember a similar effect when I was learning to juggle, decades ago. Sometimes the brain needs time to put the pieces together. You take a break, and the next time you try, suddenly you manage the thing you weren’t able to achieve before.

Half Price eBook of the Week Offer 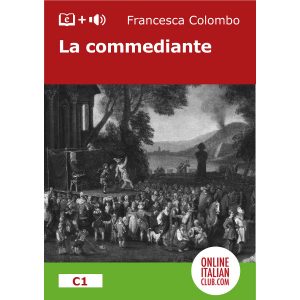 It’s a C1 (advanced) level, so the cover blurb, if it had a cover, is in Italian:

N.b. If your level is significantly lower than C1 (advanced), check out our catalog page, where you’ll find all of our ebooks listed by type and in level order.

Saturday’s bulletin of ‘easy’ Italian news (text + audio) is FREE. Click here to read/listen to it.

That project is funded by donations from the site’s users. See who helped.

We publish three free bulletins each week. It’s free to subscribe, and so get each one send directly to your email inbox.

Reading/listening to each bulletin, for a few months at least, will give your Italian comprehension skills a real boost! At zero cost.