As mentioned on Monday, this week I’ve been forced by the virus restrictions to shift my English teaching (six groups of Italian kids and three of adults) entirely ONLINE.

We spent the weekend setting up Zoom classes, and worrying how they would work out. Monday was stressful, with three groups to teach using this, to us, unfamiliar technology.

It seems that most everyone else was already perfectly used to ‘going to school’ from their living rooms or in their bedrooms. It was only us that hadn’t (yet) realised that the virtual, online future was already here, and had been for some time!

Of my three Monday classes, the first (two Italian-resident Chinese middle-school girls) was a mess, mostly because I hadn’t realised the limitations of the technology, or adapted to its possibilities.

The next group though, five fifth-year elementary school students, went a lot better. I’d almost say ‘well’, and in parts ‘fun’. There were hopeful signs that this wouldn’t be as bad as I’d expected!

And by the evening, when the adults showed up for their lesson (virtually, looking and sounding more sober than usual), it didn’t seem to make much difference that my students were tuning in from their various apartments while I was teaching from my makeshift garage office – the lesson was much the same as it always is, or perhaps better, because I was able to make use of online exercises and materials without the hassle of setting up projectors and so on.

Tuesday lunchtime I did my fourth thirty-minute French conversation lesson, and to my surprise two things: firstly, my spoken French is already coming together, after just a couple of hours of practice; and secondly, my young French teacher was totally blasè about the online teaching thing. She works ‘in’ an Italian school, apparently, and is used to dealing with classes of thirty or so teenagers. Online? It was all the same to her.

Thanks to club members who are also already experienced teachers on Zoom, or Google Meet, or whatever platform their school or university chose for them – several wrote in with tips and encouragement, which was a real help!

As was the French lesson. We spent our thirty minutes mostly talking about our work and, by the end of the conversation, had agreed that, with her couple of months of mostly online teaching experience and my three decades in the classroom, there was plenty of potential for sharing ideas!

Insomma, it turns out that I was late for the future. It’s already here but, fossil that I am, I hadn’t been aware that classroom teaching no longer needs an actual classroom. Perhaps that’s a shame, but it’s undoubtedly already the way things are.

Why will language schools need to pay rent on expensive premises downtown (our school is bang in the center of Bologna, next to the cathedral, and features classrooms with air-conditioning and frescoes on the ceilings) if they can get away with a hundred-dollar a month Zoom subscription?

It seems likely, though perhaps regretful, that the ‘future future’ will look very different, 95%-effective vaccine or not. Why not learn Italian in an ‘online school’ and THEN travel to Europe for a taste of ‘la dolce vita’?

OnlineItalianClub.com (run by my company based in the United Kingdom) has been teaching online, and publishing websites and ebooks, for many years, of course. But while we’d considered organising group courses online, we’d dismissed that possibility as being impractical. Time zones are a pain, given that a third of our club members are in Europe, a third in the USA, and a third in Australasia.

Also, when we tested out groups on Skype a year or two back, we found the quality of the experience was adversely affected if just one participant had a dodgy microphone or poor Internet connection. For which reasons, we continued to focus on individual lessons, which invariably work well and have the advantage of allowing the student the teacher’s undivided attention and plenty of time to speak.

But then… bang! Covid 19, cancelled flights, borders closing, masks and lockdowns everywhere you look! What’s to say? Sometimes I get it wrong, sometimes things change quicker than we expect.

Today I have two more classes (arguing politics with two leftie teenage girls, and a pre-intermediate group of pleasant adults). Tomorrow there’s the high school group (mostly conversation, gossip about boyfriends, etc.), plus my first/second year elementary school class of five children, some of whom I’ve been teaching since they were just three years old. I’m betting they won’t be fazed at all about taking their English classes on dad’s smartphone or mom’s office laptop.

By Thursday night, then, I’ll have completed my whole week of classes (thank goodness there are none on Fridays), and it’ll be avanti to the weekend, when, instead of scrambling to catch up with reality like last Saturday and Sunday, there’ll be time to assess progress and decide how to proceed.

Resisting the ‘future’, holding out for things to ‘go back to normal’, doesn’t appear to have been such a great move for us. Nevertheless, sometimes fate delivers a timely and motivating kick in the rear – which is nature’s way of telling us to pick up the pace and get with what the rest of the world is doing! 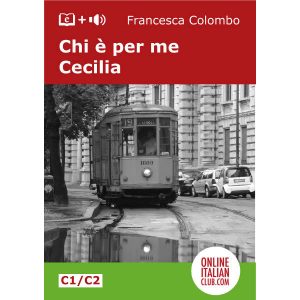 Milanese twenty-something Matteo loses his first real job after just a few months, and despairs he’ll ever find another. His parents don’t understand how bad his prospects seem, and he hasn’t spoken to his best friend, Cecilia, for several months. Should he call her? But can true friendship between a man and a woman really exist?

Before buying this one, be sure to take a look at the Free Sample Chapter (.pdf).

If it’s too hard (which is quite likely), instead select something more suitable from our catalog page. There, all of our ebooks are listed by type, and in level order.

N.b. A handful of people have had problems using the Paypal payment option in our online shop. This is an ongoing issue, so if you need help, write to me and ask. The solution is to try again, or better, to choose the Credit Card/Stripe payment option, which always works well.

And another don’t forget: Tuesday’s FREE edition of ‘easy’ Italian news (easier than the new ebook, anyway) is here.

Go read/listen to it, if you haven’t already done so!